Jack: Once, in high school, I attempted to make an 800-mile cross-country road trip in secret over spring break, not because I really wanted to, exactly, but because a girl I really liked had demanded it, and at seventeen, that was enough to get me to agree to what I knew was perfectly stupid. (I was saved, incidentally, by the sage intervention of my less-stupid, less-seventeen brother, who later went on to found Retcon Punch.) I like to think we all grow out of that by the time we start making regular car payments, but this month’s Hawkeye raises some unsettling questions.

Clint Barton is not a stupid man. A stupid man would be tempted to regard this predicament as a good one:  a beautiful redhead — Penny, whom we may recall from the car heist in Issue 2 — enters out of nowhere in a short dress and high heels , kisses him passionately, and asks for a favor.

Because Clint is not stupid, he immediately recognizes that this situation will bring nothing but trouble. He is, however, only human (and a nice guy, besides), so he brings her home for coffee and promises to help. She explains that she has shot a man — ostensibly her ex-husband — who works with the tracksuit mafia. They continue to guard a small safe, the mysterious contents of which are vital to her survival. The whole thing sounds more than a little fishy, and Clint knows he’s not getting the full story, but she’s kissing him again, so what’s a boy to do? He agrees to raid a sketchy Slavic strip-club with her and create the diversion that she needs in order to steal the safe. Clint swings his fists around with reckless abandon, mulling over his fear of commitment and the need to break it off with his girlfriend, while Penny swipes the safe, despite an elderly gentleman of the tracksuit mafia who has her at gunpoint. In the process, Clint is arrested, but released on bail. Back at his apartment, Penny is livid. She has sent him a series of comic books, the ordering of which was to tell her the combination to the safe (sounds like a fool-proof plan to me:  who could possibly change the order some books are in?). Clint has ruined everything by reading them and getting them out of order. Unable to open the safe, she abandons it and leaves the apartment in a huff. Meanwhile, a colloquium of mobsters, to include prominent members of the tracksuit mafia, resolve to have Clint killed, Avenger or not.

Not only is Clint not a stupid man, Hawkeye is not a stupid comic. Therefore, it cannot do anything sexist without explore and challenging the cliche. The issue is peppered with the covers of the comics that Penny has sent to Clint, and they all feature scantily clad, impossibly built damsels in distress.

This is not the stuff that motivates Clint at his most heroic — or anyone. He at least has the satisfaction of knowing that he’s clocking bad guys in the jaw, but he is understandably conflicted about the whole mess. The Avengers are less than thrilled with his unilateral decision to single-handedly raid a strip-club so that some strange woman can steal from it, all for reasons that she refuses to explain to him. It is unprofessional, morally ambiguous, and frankly undignified. And Kate, ever the caustic voice of reason, isn’t having it either. 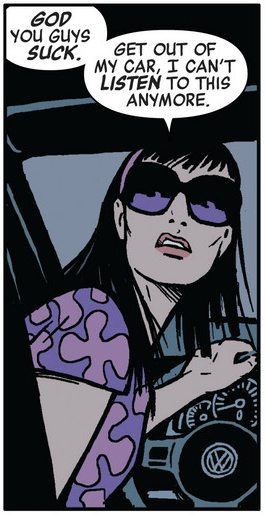 There’s a wide literature on the portrayal of sexuality in comic books, and of all Retcon Punch’s regular contributors, I am probably the least qualified to comment on it. But it seems to me that Clint is, once again, a more-or-less real person being made to live out the absurdities of a super hero’s life, and part of that life is taking outrageous risks at the demand of a beautiful and manipulative woman. In the context of a real person, we can see clearly how morally ambiguous that sort of behavior is, and how pitiful and destructive both Clint and Penny look in the process.

What do you see going on here, Drew? You’ll know far better than I: what are we to make of this commentary on the medium? What will come of Clint’s arrest?  What is in the safe, and what is Penny really after?

Drew: Given the nonchalant way Penny disappears when she realizes she can’t get into the safe, I can’t help but suspect that it ultimately isn’t that important to her. Sure, she says it’s a matter of life and death, but that’s mostly because she knows exactly what will motivate the chivalrous and unsuspecting Clint. She’s a con woman, exploiting her own sexuality to get exactly what she wants from whoever she can trick into giving it to her. The reason it works is because, at first blush, she really does just seem like a damsel in distress.

It’s that upsetting of our expectations that makes this issue a smarter treatise on gender politics than it may seem. At first, the throwback issue covers and mod-y dresses all the women are wearing (seriously, that scene at the Avengers Mansion would seem equally at home at the Playboy Mansion ca. 1962) give the issue a very retro feel.

When juxtaposed with the seemingly unenlightened gender roles, those touches give the issue the kind of winking, if bemused, nod to the way things used to be — the kind that has made Mad Men such a phenomenon. While that’s a clever — and stylish — way to approach a story, my problem with that kind of “look how backwards things used to be/currently are” stories is that they end up wanting their cake and eating it, too. That is, drawing our attention to how absurd all these damsel in distress stories are wouldn’t be clever at all if it was simply a way to excuse another damsel in distress story.

Instead, Fraction simply plays to those expectations for effect, making us as much of a mark in Penny’s plot as Clint is. I’m happy to write off my expectations as a knee-jerk response to the kind of stories comics have been telling since Superman first hoisted a car, but Clint’s own acceptance of Penny’s complete and utter helplessness is a bit more telling. I’m inclined to see his actions here as naïveté — that he simply takes what people say at face value (making the fact that he was playing “Indian Poker” with the Avengers kind of funny) — but I could also see readings of egotism fueling his own sense of being the hero (though to his credit, he is and Avenger), or even the kind of libidinous non-thinking Jack mentioned (Aja makes a point of drawing our attention to the “harsh light of day” just before Penny splits). I’m less inclined to see this as Clint’s own presumption of gender roles, but I’m not really qualified to parse the Freudianism of a man who shoots pointy sticks at things (even if I am qualified to laugh at my own penis jokes), so I’ll leave that to the comments.

All that is to say, I think the gender politics here are all by Penny’s design, and — tellingly — so are the retro covers. Their presence largely influences the tone of the issue, so I think it’s important that we know she sent them. She makes us think we’re dealing with a ’60s story, even when we know it’s 2013. Annie Wu does an amazing job with those covers, but I can’t get over the fact that David Aja was able to give over five pages of this issue to splash pages and still manage to tell a very complete story (with a two page epilogue, no less).

For me, the beating heart of this series is its quirky sense of humor. Fraction quasi-bleeps the name of the strip club as “Болваны Town” — which Google Translate has helpfully informed me is Russian for “Boobies Town” — not that there’s any confusion: Clint later explains the contingency should their plan go “Болваны-up.” The censorship is entirely gratuitous — Clint’s contingency is to “shag-ass” to his apartment building — but it’s goofy and colorful, which is exactly what defines this series in my mind.

Then again, this issue reveals that this title can also tackle complex subjects with a maturity you wouldn’t expect between all of the Boobies jokes. For featuring more scantily-clad women than any other title I’ve read this month (take that with a grain of salt — we stopped reading Catwoman a while ago), it only treating them as helpless to make a point, which is all the more potent because we buy into it. I’ve always known this title was smart, but I’m only starting to appreciate how intelligent it can be.