Today, Drew and Mikyzptlk are discussing Superman 17, originally released March 6th, 2013. This issue is part of the H’el on Earth crossover event. Click here for complete H’el on Earth coverage.

Drew: Last month, Patrick compared Superman 16 to a joke with an aborted punchline — the entire issue was spent building towards a payoff that simply evaporated when we finally arrived. Superman himself has a very similar experience in Superman 17, when he comes face to face with the Oracle, who shows Superman a confusing series of images, but disappears before giving any explanation. It’s a frustrating experience for Clark, one that very pointedly reflects my reactions to both this issue, and the H’el on Earth event as a whole.

The issue begins with that confrontation with the Oracle. We finally learn exactly what “the Oracle” is: a”witness to threats to the flow of time and space.” Also, he’s apparently meant to warn those responsible, but he goes about doing that in just about the least decipherable way possible. Anyway, it’s not like that five-page boondoggle has anything to do with the conclusion of a months-long crossover event, so let’s not dwell on it, right? (You know, besides the FIVE PAGES already spent on it). At any rate, Clark speeds back to Earth, where — in spite of the best efforts of Wonder Woman, Superboy, and a newly-converted Supergirl — H’el’s plan is succeeding. Just when it seems like H’el is going to get away, Kara stabs him with some Kryptonite, inadvertently sending him back to Krypton.

That’s right: H’el arrives back in Krypton without destroying Earth at all. Everything everyone was fighting over turns out to be moot, since time travel apparently doesn’t require incinerating the whole solar system. So…why did H’el build that big, solar system-incinerating time machine? That’s like building a nuclear weapon to crack a walnut — excessively, wantonly destructive. Couple that with H’el’s dedication to activating this time machine in an inhabited star-system (as opposed to any of the LITERALLY BILLIONS of other stars in JUST THIS GALAXY ALONE), and you have a portrait of a villain whose villainous intent seems entirely contrived for the purposes of being villainous.

I’m still holding out hope that there’s more to H’el’s story — one that might explain his fixation on destroying Earth (again, in spite of the fact that he could have destroyed any planet and also didn’t have to destroy any planets in order to achieve his goals) — but this is apparently supposed to pass for a satisfying conclusion. Never mind that we never got a satisfactory explanation for who H’el really was, or exactly how any of this time travel stuff works (look, I’m willing to accept “time machine” as an explanation, but then what’s with this notion that he can just open up time portals with his mind?). Why, it’s almost like somebody just showed us a “cascade of images,” and then disappeared without any explanation. 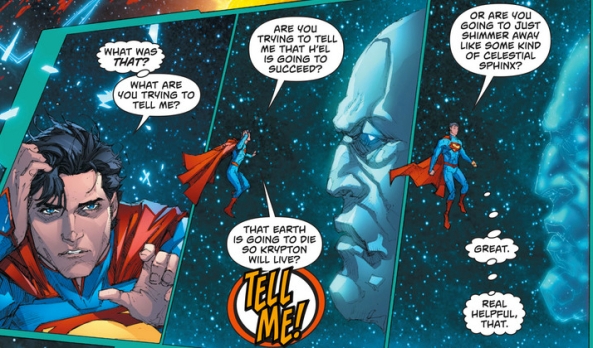 You said it, Clark.

Normally, I’m a big fan of this kind of meta-commentary, but only because it usually says something interesting about the story or the way it is being told. In acknowledging that the lack of answers is incredibly frustrating, but still not providing any answers, anyway, writer Scott Lobdell accomplishes an “ain’t I a stinker?” smugness that is totally unearned by this bloated, unsatisfying mess of an issue.

There’s plenty of other wonky shit in this issue — including the entirely half-assed notion that H’el needed Superboy to tear down the fueling station in order for his plan to succeed (fuel, mind you, that he apparently didn’t need at all), which is supposed to impress us with H’el’s level of pre-planning. Of course, we only learn that long after it happens — immediately after Kon does it, H’el’s reaction is less assured:

Just to be clear: H’el’s entire plan — which he later brags he spent twenty years crafting — hinged on manipulating a being that he didn’t even know existed before arriving on Earth to do a thing he didn’t think was possible in the first place. GOOD PLAN, H’EL. Oh, and lets not forget that he ultimately didn’t need that fuel, or the time machine it powered to accomplish his goals, anyway.

Ugh. I should have known this event would turn out to be such a shaggy dog story — as Patrick pointed out last month, so many of the chapters leading up to it have also been shaggy dog stories — but I think I let its scale impress me. I was sure a several month-long, several title-wide event would have a satisfying payoff, but boy was I wrong. Lobdell even tacked on a cliffhanger in the epilogue to make this ending especially unsatisfying. Mik, you’ve long been wary of the idea of Lobdell on Superman, but I was holding out hope, anyway. Feel free to start your response with a big fat “I told you so.”

Mikyzptlk: I told you so! Oh…that actually didn’t make me feel better at all. In fact, if it’s possible I’m even sadder. Not the Animal Man 18, Swamp Thing 18, or Batman, Inc. 8 kind of sad mind you, more like the “I can’t believe that DC actually gave Superman to Scott Lobdell” kind of sad. Drew, you’re right, I have been wary about Lobdell on Superman since it was first announced, even going so far as to decry the decision on my personal blog. However, when Lobdell’s first issue on the title debuted I was actually pleasantly surprised. I remember thinking that Lobdell was giving the title an interesting edge, and I actually enjoyed reading his interactions between Lois and Clark. I also remember thinking that, at the very least, Lobdell would be giving the Superman titles a sense of unity that I felt had been lacking. However, after all that we’ve been through during this event, I think it all boils down to another piece of meta-commentary found in this issue.

“Making this up as I go along.” THIS. RIGHT HERE. THIS. This is Scott Lobdell’s admission of guilt. I’m utterly convinced that this is how he writes everything. There was even a Newsarama article (that I cannot, for the life of me, find at the moment) where they ask Lobdell how the repercussions of the Death of the Family story will play out in his books. His response was something along the lines of: “I’m not developing a plan because the characters are going to be so surprised by what the Joker does.”  To me, his stories are proof that he doesn’t plan ahead. We are left with “events” such as this that look good on the surface, but are superficial and usually empty of any substance or meaning. Oh sure, Kenneth Rocafort gives us beautiful packaging, but the box that Lobdell provides is usually devoid of anything of value. I don’t want to turn this into an essay on how much I’m constantly disappointed by Lobdell, but I’m so tired of this guy wasting my time and sullying some of my most beloved characters.

At least with some of these characters, he’s only sullying their present, with Superman however, DC seems more than content to let him muck about with Superman’s past, more specifically, planet fucking Krypton’s. He’s already introduced the concept that one of the most advanced civilizations in the universe were totally cool with slaves, but now that we have the murderous lunatic that is H’el safely back in Krypton’s past, who knows what additional damage the character (and Lobdell) can cause? The sky is seemingly the limit with the amount of damage this guy is capable of causing, I can only hope that DC boots him for good soon.