The best-laid plans of mice and men

Drew: I used to get so disappointed when the plans of a protagonist would change. It took me a long time to understand that those changes are the engine of drama, and even longer to appreciate that they reflect reality on a fundamental level. Our plans are always changing, sometimes due to external forces, and other times due to internal chances to our own priorities. Most narratives are loaded with the former type, but that latter type is rare. Rarer still are narratives where every character has their plans upended in both ways. Saga has long been one such rarity, and issue 16 reasserts the fragility of its characters’ plans.

Upsher and Doff have tracked their story to a Landfall Special Agent, who they ask to comment on Alana. Agent Gale insists Alana is actually under deep cover and implores them to drop the story. Of course, as soon as Upsher and Doff are gone, Gale calls the freelancer agent to put a hit out on them. Speaking of freelancers, Gwendolyn realizes what’s going on with the food on their little planet, and races back to rescue The Will. He’s barely alive, and Gwendolyn can’t save him, but she knows someone who can: Marko. Meanwhile, things are downright idyllic on Quietus, where Heist and Klara are quietly nudging Marko and Alana towards work in the field of pirate television soap operas. Unfortunately, their good times are interrupted by the arrival of Prince Robot IV. Fortunately, Gwendolyn has also just arrived with a vested interest in Marko’s survival.

And just like that, my fist is pumping. Brian K. Vaughan showed us Prince Robot IV’s arrival (and subsequent interrogation of Heist) way back in issue 12, but held back Gwendolyn’s presence just to goose the anticipation for the actual showdown. It’s a masterclass in tension-building: the story on Quietus was given an added urgency by knowing the clock was ticking, while the story with Gwendolyn et al. gained urgency from us not knowing if they ever make it to Quietus. Keeping us in the dark about Gwendolyn’s presence (just as we were kept in the dark about Hazel’s family’s presence in issue 12) keeps us tied to Prince Robot IV’s experience. That may seem like a strange perspective to take in an issue where he only shows up for a single page, but Vaughan and artist Fiona Staples dive into his subjectivity with surgical efficiency. Indeed, every single panel works to emphasize his isolation here. 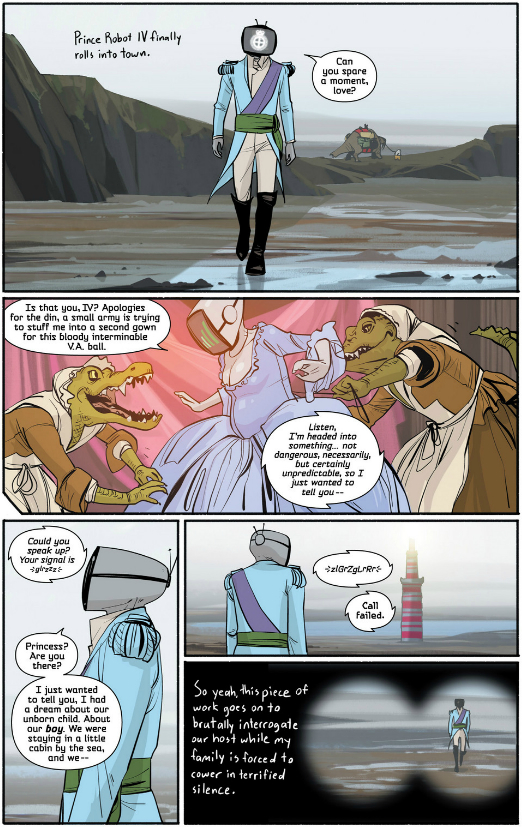 Even Prince Robot VI’s plans are subject to change. Vaughan relies on the old disconnected-call-represents-how-disconnected-a-character-feels trope, but the fact that he’s only calling because of the uncertainty of this situation — a possible final farewell that ultimately falls on deaf ears — gives the scene a poignancy that is several shades subtler than most villains could ever hope to be.

But like I said, everyone’s plans are getting shot to shit. Heist will soon literally be shot (along with Marko and Alana’s hopes at a peaceful existence), and Upsher and Doff may be shortly behind on that front. Special Agent Gale almost had me going with his story about Alana being a spy, but the fact that his very next move is to kill these guys makes it pretty clear that he was just trying to shut them up long enough to have someone else shut them up permanently. Heck, even the Heroine parasite is having its plans destroyed. Look at how desperately Gwendolyn’s hallucination tries to convince her not to throw up: 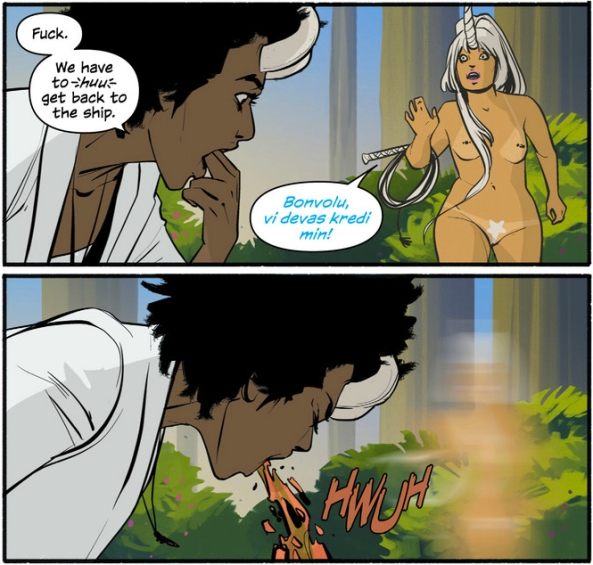 For those of you who don’t speak blue, she’s saying “Please, you have to believe me!”

What’s really fascinating for me about this issue’s theme of changing plans is the way it relates to the creative process. Early in the issue, Heist explains that he would never work on a children’s book for fear of having to collaborate with an artist. It’s a winking nod to the relationship Vaughan has with Staples (or any of his collaborators, presumably), but in the context of the issue, posits collaboration as an artistic force of changing plans. For some, that is a scary prospect, or even a bastardization of auteurism,  but this series makes its own (strong) case for the value of collaboration. Intriguingly, Vaughan doesn’t limit that commentary to his artistic collaborators. Indeed, the Open Circuit simulates not just the stage and its actors, but the audience full of people you’re watching it with. It’s an intriguing idea, but Alana lays it all out there with her assessment:

Most of it is just bad melodrama, but some of the storylines can be interesting, especially when the audience gets involved.

Vaughan seems to be talking very generally about comics, and the role the audience has in making it interesting. This is a subject that is particularly dear to our hearts here at Retcon Punch, and seeing it enshrined with such style is both thrilling and heartening. Vaughan thinks we’re important to the process, too, even if he does think we’re all green mermaids and mummies. 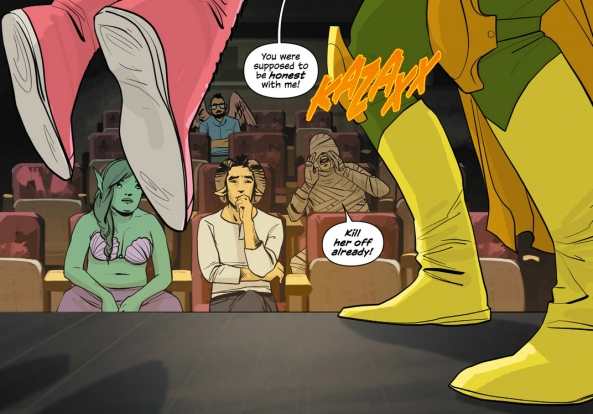 I really don’t think I could be happier with this series. This is unabashedly a “putting the pieces in place” issue, but is also the most thrilling comic I read this week. Shelby, there’s so much to talk about, but I feel like I’ve got to prompt you on the one question that matters most: how loud did you squee when you saw the return of the Seal Boy (albeit in a tiny cameo)?

Shelby: As a green mermaid, I was stoic in my assessment of Seal Boy. Ok, obviously I’m LYING, I squee’d just as loudly as I’m sure you did, Drew.

Vaughn is masterful at building stories and tension, and I was never more reminded of that fact when I remembered that the last 4 issues have been a flashback. Yes, in the face of the happy family togetherness time, both on Quietus and whatever planet The Will and Gwen crashed on, I completely forgot that we already knew Alana and Marko had been there for weeks and Prince Robot IV was interrogating Heist. Honestly, I also kind of forgot that IV is a villain; he’s just so sympathetic. I can’t help but compare him to both Marko and The Will as they are trying to build families of their own (albeit in markedly different ways. But I don’t think IV is the the bad guy any more than Gwen is; ultimately, the war is the bad guy, and every other character is just caught up in it, acting the way they feel they need to act to survive it. So far, love has been the only way to stop it: Marko and Alana’s love for each other, The Will’s very new love for Sophie (and maybe Gwen kind of), and maybe now IV’s love of his baby? IV’s brief, melancholic phone call with his wife served to remind us that he is just a young robot, about to be a father and tired of the war keeping him from his loved ones.

I  honestly can’t wait to see these three groups collide. The Will was hired to kill them, and Gwen wanted Marko dead for her own, personal reasons, but now she wants him alive for different, personal reasons. IV is there to…actually, I don’t remember his mission. Being on the “law-abiding” side of the war, I imagine he’s to bring Marko back to the POW camp and arrest Alana for treason, but he could be there to kill them as well. I feel like Hazel is going to be the key to the whole situation, hopefully the one person who can keep the whole powder keg from errupting. It’s also easy to forget that infant Hazel is the narrator of this story, so clearly she’s got a lot of story left to tell.

On an unrelated note, there’s a letter in the letters column from a volunteer at the Chicago not-for-profit Open Books. I know Jeremy, I volunteer at Open Books with him, and I’m so happy to see his letter mentioning the organization get printed. Open Books runs a lot of literacy programs for students in the city; it’s very important to me, and I like to think I played a big role in playing up the comic book scene at the store. I wanted to thank the Saga team for mentioning this awesome organization, and I would encourage any of you guys in the Chicago area to check the store out. You can buy cheap used books, help kids across the city improve their literacy skills, and if you come on the weekend I might be around.