Spencer: In recent months our Saga coverage has focused quite a bit on how Fiona Staples and Brian K. Vaughan have been taking their time, luxuriating in a slower pace and revealing more and more about their characters as they move pieces into place, setting up for a no doubt explosive finale. That said, no matter how much build up they have, grand confrontations don’t work the same way in Saga as they do in many other similar pieces of media; there’s no monologue-and-metaphor-filled matches of will, no intricately choreographed fight scenes, no thirty episode long battles as Namek slowly burns in the background. Instead, Saga’s finales reflect real life violence. They’re quick, brutal, often random, and care very little about the events that have led up to them or who’s right or wrong.  END_OF_DOCUMENT_TOKEN_TO_BE_REPLACED 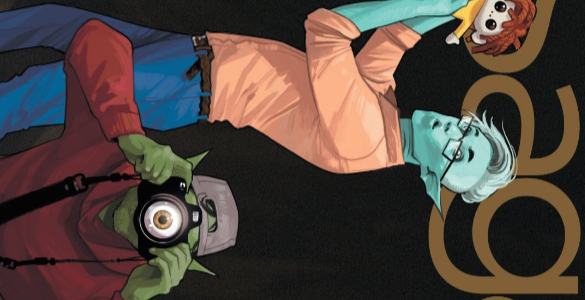 The current arc of Saga has, in many ways, been a slower one. That’s not a complaint — Brian K. Vaughan and Fiona Staples know exactly how to make even simple moments of domestic bliss, strife, or harmony absolutely riveting — just an observation. With Ianthe plotting in the background, and with Saga‘s track record of major twists and deaths coming at a fairly regular pace, there are likely some readers waiting impatiently to get to the next “big” moment and see exactly where this is all leading. Saga 51 brings us one step closer to a major reckoning, but it also reminds readers why these quieter issues are so essential to the series as a whole. END_OF_DOCUMENT_TOKEN_TO_BE_REPLACED 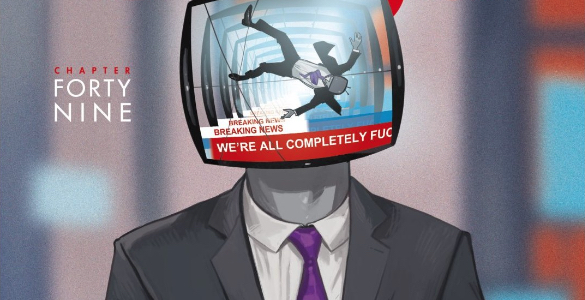 Jane: You’re willing to have [your story] published and read by strangers, but you don’t want your best friend to see it?
Daria: Thank you for understanding.

Daria, The Story of D

I’ve never been all that good at communicating with my parents, especially when it comes to details about my life. It isn’t because I don’t like them or we don’t get along, but because I care so much about what they think about me that I’m terrified I’ll upset or disappoint them. It’s the same reason it’s easier for me to share my writing with, or even sing karaoke in front of, strangers than friends — people who actually know and care about you, whose opinions you respect, can hurt you far more than anyone else. Saga 49 finds more cast members than ever crammed into tight quarters, which makes the wounds they inflict upon each other all the more painful. END_OF_DOCUMENT_TOKEN_TO_BE_REPLACED

Shelby: One of the changes I’ve been trying to make for myself these last few years is in improving my communication. So many problems in both the real world and in fiction can be solved with just some simple communication. Every time two big-name superheroes meet for the first time, there’s always an issue devoted to them punching each other; if they just took two seconds to communicate a bit first, we’d be spared those boringly inevitable stories. The real problem, though, comes in when characters cannot communicate and have to act anyway. Characters who choose to act first, I got no sympathy for; it’s the ones that couldn’t even if they wanted to that I find the most intriguing and the most sympathetic. If you’re at all familiar with Brian K. Vaughan’s Saga, you’ll understand this sentiment completely. END_OF_DOCUMENT_TOKEN_TO_BE_REPLACED

Spencer: Every once in a while, a long running series will introduce a new concept and try to say, “hey, this has been important all along!” This can be frustrating when it isn’t true (see: all the various retcons in Star Wars) or when the concept changes the entire dynamic of the series. Yet, when a new idea seamlessly integrates itself into the structure of the story, helping to express and define concepts that have been there all along, it can be absolutely enlightening. That’s what happens in Saga 34, where Fiona Staples and Brian K. Vaughan use the idea of “diversity” to dig into both the causes and the solutions to all the problems plaguing the world of Saga. END_OF_DOCUMENT_TOKEN_TO_BE_REPLACED

Drew: I’m currently taking a class on autobiographical comics, and the discussion thus far has centered around the question of subjectivity. Many of the memoirists we’ve examined thus far have favored the “truth” found in their subjective experience, as opposed to the “historical truth” of a more objective account, but I’ve always found the assumption that history is objective to be problematic. “History is written by the victors,” as the saying goes, revealing not only that history is necessarily biased, but also that history is more the story of wars than life. Indeed, even a historical account of a war has to consider who the story is really about: Generals? Individual soldiers? Civilians? Reporters? That last one may seem out of place, taking a narrow focus on people who neither represent the masses nor the machinations of war, but as the ones literally writing the histories as they happen, reporters are the only ones capable of giving an account that isn’t filtered through the subjective experience of someone else (as, say, a civilian’s story as told by a reporter would be). There are more layers of subjectivity to explore here, but the point is: reporters’ stories are just as important as those they cover, which makes Saga 33‘s turn to Upsher and Doff so welcome. END_OF_DOCUMENT_TOKEN_TO_BE_REPLACED

Patrick: In the Season 2 episode of Community “Cooperative Calligraphy,” the group voluntarily sequesters itself in the study room until they can determine who stole Annie’s pen. Jeff eventually brings about peace by saying that he would rather believe the impossible — in this case, that a ghost stole it — than believe that one of his friends would subject the rest of them to this kind of psychological and emotional torture. It’s a play on the idea that we make ourselves believe all kinds of things that aren’t true in the name of love. We believe our friends and family to be capable of so much, exaggerating their talents or intelligence or compassion in our minds. Brian K Vaughan’s world has been punishing Marko and Alana for their love, but this issue tangibly rewards them for their blind faith in one another. It’s the metaphorical made real, and it’s absolutely beautiful. END_OF_DOCUMENT_TOKEN_TO_BE_REPLACED

The best-laid plans of mice and men

Drew: I used to get so disappointed when the plans of a protagonist would change. It took me a long time to understand that those changes are the engine of drama, and even longer to appreciate that they reflect reality on a fundamental level. Our plans are always changing, sometimes due to external forces, and other times due to internal chances to our own priorities. Most narratives are loaded with the former type, but that latter type is rare. Rarer still are narratives where every character has their plans upended in both ways. Saga has long been one such rarity, and issue 16 reasserts the fragility of its characters’ plans. END_OF_DOCUMENT_TOKEN_TO_BE_REPLACED

Shelby: I don’t have any kids, but I assume parenting is hard. Not just because you’re trying to figure out how to keep this small creature safe and provide for it and raise it in a way that it doesn’t turn out to be a total douche (presumably that is a common parenting goal), you’ve also got to put up with a deluge of “help.” Everyone who’s raised a child, as well as no small number who haven’t, believe they know the best way to do it. And they are more than happy to give you all sorts of advice on the subject. No matter how sound that advice may be (like, “you should probably get a job”), if it’s unsolicited it will probably be poorly received.