Taylor: One of my favorite places to eat at here in Chicago is called Cozy Noodles and Rice. It’s a little Thai place that’s cheap and has robots hanging on the wall. It also has a BYOB policy so it’s not uncommon for my friends and I to bring some beer or wine to enjoy with our meal. Thai food is really flavorful and spicy, however, so often I find that the taste of the alcohol I’m drinking clashes with the taste of the Thai. Separate, they are both delicious. But when combined they just don’t mix well. The lesson I’ve learned from this is the need to cleanse the palate after a heavy meal or thick drink. TMNT 51 is the first issue after the momentous issue 50, and in many ways it acts as a swig of water between two distinct tastes. It prepares us for a brand new turtle adventure while still letting us savor the events which proceeded it.

Splinter is now the leader of the Foot clan which means the turtles are now fighting alongside their long-time foes. They’re doing what they do best — beating up bad guys — when they come across a gang with a bunch of mysterious, high-tech garb. Michelangelo is absent from this action, of course, as he has chosen to shun the Foot Clan and his family to fallow his own path. But things are also becoming more interesting back at the Foot Clan headquarters, where April confronts the plotting Kitsune. And, of course, new trouble is always brewing in New York and it looks like the turtles have a new adversary to tangle with.

As I hinted at above, issue 50 was nuts in the best way possible. Shredder died, Splinter took over the Foot Clan, Michelangelo left his brothers, and basically everything we’ve known about TMNT was thrown on its head. The issue also ended several long-standing story lines, so it’s only natural for issue 51 to introduce us to a new adventure. Writers Kevin Eastman, Bobby Curnow, and Tom Waltz are aware of this and smartly tag-team in a new artist and begin to softly introduce new, enticing plot lines.

Artistically, this issue signals a far departure from previous issues. Mateus Santolouco and Cory Smith have put their stamp on the art of this series in the recent past. While their styles are different, there are enough similarities between their work to give the hand-offs a sense of consistency. The art in issue 51 is taken over by Ken Garing, who brings with him a unique style quite unlike the previous artists I’ve seen on this series. His work in general is a bit blockier and is rests heavier on the page than either Smith or Santolouco’s figures. Just check out the difference in how the turtles are drawn in this issue.

The turtles bodies are basically large squares with smaller cubes sitting on top. This makes the turtles in general seem beefier and more tough and not as teenage as I’ve seen them drawn in the past. Part of this heaviness is due to the heavy outlines that Garing uses on all the characters in this issue. Above, the lines are so think that he even adds a blue outline to make them stand out against the dark night. While this is certainly a different look to the turtles than I’m used to seeing, by no means do I dislike it. I actually enjoy this change of pace and I think these new designs give the turtles some grit that was missing in previous designs.

Another thing Garing does that creates this dramatic stylistic difference is make heavy use of hatching and feathering to create shadow effects. Given that basically all of this issue takes place at night, it’s only fair that most characters would be portrayed in a shadow of some sort. Check out this shading on Leonardo. 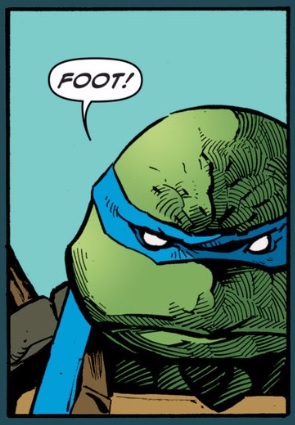 It’s a highly stylized. Instead of having his face darkened gently, Garing uses these clashing lines to bring attention to Leonardo’s face. Instead of smooth and green, his headplate is furrowed and ripply. There’s something about this technique that I just love. The fact that I can see every individual line drawn by the artist is engaging to me. Knowing that each of this lines represents a single movement of Garing’s hand reminds me that what I’m reading is indeed produced by hand. Sometimes I forget that about comics, don’t ask me why. Again, this is different and new to me, but I like it.

The change in artist and style in this issue helps the writing team establish a new tone for this series right away. My fondness for the new style aside, I think this is the right choice. In a way, it helps to distinguish a different path for the series. It tells me that where the comic is going next is somewhere new. That this series promises to not become stagnant. That above all else, I’ll continue to love this series.

Drew, do you have any other thoughts on the new artwork? I didn’t even mention any of the new storylines here, but I’m intrigued by all of them. Is there one you more excited for than others?

Drew: That’s a tough one. Splinter in control of the Foot is so unlike any other Turtles story I’ve ever encountered, it’s hard not to be excited about everything here. It’s a bold new direction for this series, and this issue actually makes for a great jumping-on point, with quick little expository asides explaining how this situation came to pass, as well as giving us some new info about relationships and allegiances. 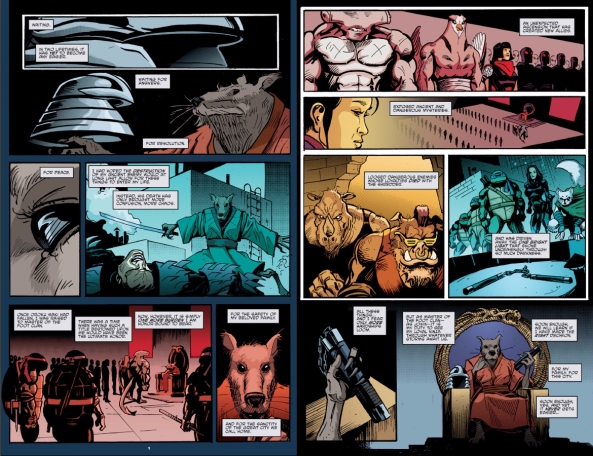 It’s all the information a newcomer would need to understand what’s going on here, even if those summaries will just make them want to go back and read the previous 50 issues (which I can’t recommend highly enough).

I suppose if I had to pick a detail I’m most excited by, it’s the prospect of Mikey striking out on his own. This series has gotten a lot of mileage out of removing each Turtle from the group and seeing how the dynamics shift, and I suspect that this may actually prove to have the biggest effect. This writing team has established Mikey as the heart of this team, and have also given him an unwavering moral compass. Will his family survive the darkness and turmoil of leading the Foot Clan without him?

Actually, that darkness and turmoil is all over the place: Koya and Bludgeon have stuck around, but I’m wary of whether their loyalties were to the Foot Clan, or to Shredder, specifically; Beebop and Rocksteady have left the Foot Clan in the wake of Shredder’s death, but it’s certain the turtles will run into them again — especially now that the Foot is focused on fighting crime; Kitsune is scheming something behind everyone’s back (which, unfortunately, seems to involve poor Alopex); and a Foot Assassin has defected to help Darius Dun and the Street Phantoms take down the Foot. Whew. That’s a lot of threats, and those are only the ones from within the Foot. It’s not clear what exactly these Street Phantoms or the team doing mutant reconnaissance are after, but this issue establishes both as credible threats.

Splinter fears the power vacuum that could arise if word gets out that the Foot isn’t what they used to be, but its easy to read this issue as the writers rushing to fill the vacuum now that Shredder is no longer a threat. His inevitable return notwithstanding (this is the Shredder, after all), I think there’s more than enough teased in this issue to make it clear that the Turtle’s troubles didn’t die with him. This may be a brave new world for the Turtles, but it’s by no means a problem-free one.

Which brings me back to Mikey. As exciting as a Mikey/Mondo team-up promises to be (could this be where Mikey picks up all of his surfer lingo?), I can’t help but worry where that leaves Splinter and the rest of the Turtles. They all have their own unique approaches to dealing with problems, but none of them are really about the silver linings. Moreover, Mikey’s own optimism came from being around his family — solo vigilantism seems to leave him wanting more. 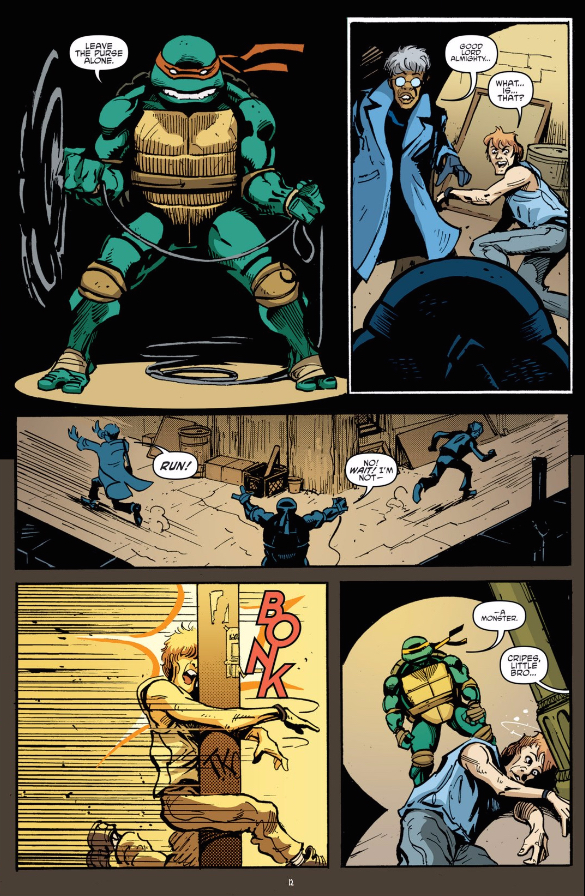 Taylor, I agree that Garing is a brilliant choice for this issue — his weighty figures are ideal for broadcasting the heaviness of all of these threats. This isn’t the turtles like we’ve ever seen them before, so using the art to reflect that makes perfect sense. The letters page suggests that we’ll get one more issue from Garig, then a run with The Woods artist Michael Dialynas, before Santolouco returns. That’s one hell of a lineup — if all of the narrative seeds planted here aren’t enough to get you back, that list of artists sure as hell should.