Patrick: “It takes a village” is perhaps a imprecise idiom about what it takes to raise a child. After all, it’s not just that it takes volume of people to effectively care for a tiny, helpless human being and mold it into a functioning member of society. It takes the emotional investment of that village, not just in the child, but in each other, to raise a child. That’s how friends, strangers, and even enemies, become family. As Spider-Woman transitions into the next chapter of Jessica Drew’s life as a new mom, writer Dennis Hopeless and artist Veronica Fish examine that interdependence, and the huge emotional cost that comes with it.

Things are looking up for Jessica Drew. Sure, there’s are not enough hours in the day, but she’s got a strong enough support network, and is adept at compartmentalizing, so her double-duty as mom / superhero is less an impossible task and more a feat of impressive dexterity. Hopeless even has Jessica express her life in those terms, introducing a useful juggling metaphor in the first couple pages — don’t think about the balls in the air. It helps that the superhero side of this equation seems to be taking it kind of easy on her. An early-issue run-in with The Blizzard has the minimal consequence of requiring her to take a nice warm shower to recover.

This is the issue at its most careful and kinetic. Fish sets up an amazing turn in this fight, showing both The Blizzard’s attack and Jessica’s counterattack in a beautifully seamless page. Sure, we get little inserts close on each of their faces, and you could make the argument that the rest of the action takes up an additional three panels, but the lack of dividers gives this scene the impact of a splash page.

Also, check out the way the motion lines from The Blizzard’s ice blast imply movement in one direction in the first panel, only to be reversed by the third for Jessica’s uppercut. Also, I love that detail of the banana peel flying off his head — it’s a comedic beat, but it also helps sell the passage of time (albeit only seconds) between these non-panel panels. The shape of this page is also going to be called back at a crucial point later in the issue, with same key differences. But let’s work our way up to it.

Things aren’t going quite so well for Roger. He’s not at Jess’ apartment when she stops by for the shower, and neither the reader nor Spider-Woman herself make much of this until Ben loops back around to it. Ben frames it like it’s something they need to be careful about confronting Roger about, but stops shy of saying why exactly. Hopeless is dropping hints like anvils here: it’s no incidental absence, but a meaningful and risky errand that Roger’s running.

It turns out that the Porcupine is handing in his letter of resignation… or, whatever the criminal-lacky version of that would be. He suits up and enters the bar that presumably acts as Hobgoblin’s hideout. The scene is weighty-as-fuck, but again Hopeless and Fish are only in the game of dropping enormous hints, rather than spelling everything out. The panel of Roger entering the bar is another great bit of foreshadowing, showing us several of the players that are going to be instrumental in the visual callback I mentioned earlier. 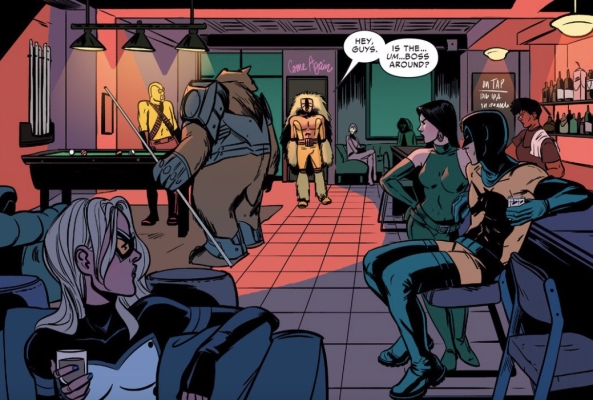 Roger’s decision to formally quit is tied up in a lot of messy emotions, including his love for both Jessica and her baby. The former is a bit of unrequited love, but that may not even matter to Roger, who at this point has found meaning in his life with the Drews.

He’ll protest later when he’s face-to-face with Hobgoblin, but it feels like Porcupine knows that he’s forfeiting his life here, doesn’t it? When he’s up on the roof with Ben, he’s nakedly honest about his feelings, and totally at peace with his role as sidekick and not the love of Jessica’s life, which he’d no doubt prefer. He’s also prepared to hide Ben when Hob’s goons — who we all saw earlier at the bar — arrive on Hobgoblin flyers. They pummel him, in a heartbreaking spread that plays out on a page with a shape almost identical to that fun one I first posted.

The inserts are more plentiful, but then again, so are the combatants. There’s also no continuous direction of motion lines, because there’s no way for Roger to reverse any of these. He’s outnumbered and overwhelmed, and there’s nothing quite so devastating as that bottom panel, with Rachelle Rosenberg’s simple color cues announcing each of these characters that turned on Roger.

By the time Hobgoblin shows up to make this loss permanent, we’re already reeling. Hopeless has been so good about growing and developing this character, that it was always going to hurt to see him go, but it’s even more heartbreaking to consider what the death means to this makeshift family, which is only holding together through sheer force of will as it is. Spencer, I didn’t mention Jessica’s pilgrimage to Moon’s Hollow, but I can’t help but wonder what we’re supposed to get out of that. In one way, it’s a demonstration of how Jessica’s past is a boon for her, while Porcupine’s past ends up getting him killed. In another way, it’s suggesting that there’s even more support for the Drews out there. Let’s look at it a third way: this is what Jessica was doing — hanging out with friends out of town — while her friend / sidekick was murdered. What’s your take on that, Spencer?

Spencer: It’s all of those things, Patrick, but it’s also another: a reminder that Roger Gocking was important to more than just Jess, Ben, Gerry, and the readers. He’s got an adorable daughter who loves him to death, and an ex-wife with…complicated feelings for him.

I’m actually really happy Hopeless and Fish stopped by Moon’s Hollow this month, because I’ve been wondering about Roger’s relationship with his ex-wife for a while now. I wasn’t sure if they were even still in contact for a while, and while Kalie’s visit in Spider-Woman 12 implied that there was some sort of split-custody deal going on, there were no further details to be found until this issue.

Even then, the only thing Olivia’s appearance really clarifies is that she’s a bit cold towards Jess. Why? Maybe she just doesn’t like being reminded of Roger — after all, she fled to Moon’s Hollow to begin with to get away from his then-life of crime as the Porcupine. I’m thinking it’s more than that, though. Bec and Cat’s refrain that this “isn’t about Jess” means that it’s absolutely about Jess. My guess, then, is that Olivia feels some kind of way about Roger’s feelings for Jess — after all, Jessica’s puzzled “hmm” even calls back to earlier in the issue, when Ben’s enigmatic hints about Roger and his desire to never disappoint her similarly baffles Jess.

Detective or not, matters of the heart continue to elude Jessica Drew.

Anyway, I’m not sure whether Olivia still has feelings for Roger — and thus views Jessica as a threat — or if she doesn’t like Roger bringing their daughter around the woman he likes, or if she just resents Jess for keeping Roger and Kalie closer to danger through her work. They all seem like viable options, but no matter what, it means that Olivia’s grief is almost definitely going to be directed towards Jessica. Between Olivia, Kalie, and Jessica, there are going to be a lot of women devastated by Roger’s death, and the burden of doing something about it is very clearly going to fall on Spider-Woman. The only other time we’ve seen Jessica with such a personal, emotionally charged case was when she was protecting her unborn child, and she wasn’t exactly at her physical best then — I don’t think we’ve ever seen Jessica go full-tilt before, and I’m afraid that’s exactly what’s going to happen as this arc continues. God help anybody who gets in her way.

Patrick, this issue was absolutely devastating, but I actually spent the first half of this issue scared to death of what potentially could have been an even more tragic ending: I was afraid that Roger was returning to a life of crime. In retrospect, none of the clues really pointed towards it, but I’d already been spoiled that there was something heartbreaking in this issue, and when I saw Roger enter the Hobgoblin’s lair, that’s the scenario my mind immediately leapt to. In a panic, it was the worst possible scenario I could consider.

In a way, then, Roger did score a victory by turning his life around, by gaining the respect of friends, families, and heroes, by doing some good for the world, and by standing up for what he believed in even when he knew it could mean his doom. I don’t know if that’s much solace for anyone else, but it does make me feel a little better. In Roger Gocking, Hopeless has crafted a unique, lovable character whose path to heroism is so compelling because he’s just so darn human. Becoming a hero was never easy for Roger, so he persevered anyway.

That same humanity, though, is why his death hurts so darn much. 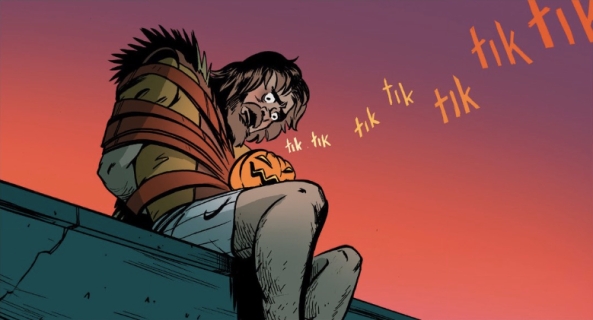 Roger’s expression destroys me. He’s so scared, so utterly terrified. I agree with Patrick that Roger seemed to know this was coming, but that doesn’t mean he’s prepared. He’s not the cool untouchable hero who can finagle his way out of the death trap at the last second or even face his death with detached, grim resolve — he’s just a guy who tried his best, and is petrified in his final moments, as any of us would be in the same situation. Roger Gocking didn’t deserve this, and while I can’t wait to see Spider-Woman bring the hurt to the guys who did this to him, it’s not going to make things better.

Oh god, I just realized — this is Grills all over again, isn’t it? I…I don’t know if I can deal with this again…