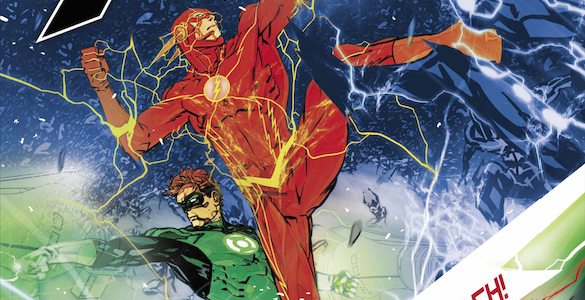 Knowledge is power. Yeah, it’s cliche, but that doesn’t make it any less true; it’s especially true throughout Joshua Williamson, Carmine Di Giandomenico, and Pop Mhan’s The Flash 24, where the power dynamics between each character are defined almost solely by how much they know. Not only does the Flash’s victory over Multiplex come, not from brute strength, but from using his CSI skills to learn about his opponent, but Reverse Flash’s utter domination of all who face him is largely powered by his knowledge of the time before the New 52.

Of course, much of Thawne’s power has always come from knowledge — he is from the future, after all — but he’s only been strengthened even further by his newfound insight into the nature of their universe; his lines about having killed Iris once already and about Wally not being the “real” Wally clearly rattle both, leaving them even more vulnerable than before. On the opposite end of the spectrum is Iris herself, who knows next-to-nothing about what’s happening to her and therefore can do nothing to fight back or protect herself.

Somewhere in the middle is Barry, who knows enough about Thawne to decipher his invitation to the future, yet is blind to many of the facts about his past Thawne’s been spouting, and doesn’t even know Thawne’s returned until after his attack on the Wests is already over. Most distressingly, throughout the last few arcs Barry’s been displaying a staggering lack of self awareness that he’s only just now getting over.

Barry’s argument that keeping his identity secret from Iris keeps her safe has always been bunk, which is something this issue proves without a doubt (if she’d been aware of Barry’s current worries about Thawne, perhaps she could have protected herself; she’d at least’ve had a chance). Now Barry finally realizes that he’s been driven more by a fear of Iris rejecting and leaving him, but even this speaks to their differences in power; by keeping this secret, Barry robbed Iris of knowledge she needed to properly make decisions about her life and safety. That’s the scary part about knowledge — gaining it so often depends on others, who may not be willing to share if it means losing their advantage.

Ultimately, Barry’s knowledge helped him defeat Multiplex, but it essentially helped Thawne defeat Iris as well: man, Williamson’s tagline that next issue will feature “the terrible treachery of Barry Allen” was no joke! Flash’s got a lot of making up to do to make this right, but thankfully, he finally realizes how wrong he’s been; that may just be the knowledge he needs to turn things around.