Spencer: Other than a codename and skills with a bow and arrow, what do the two Hawkeyes have in common? Captain America first gifted Kate her codename because “she’s the only Avenger other than Clint ever to stand up to him,” but ever since Matt Fraction’s run, writers have been downplaying Clint’s brash outspokenness in favor of emphasizing what a total human disaster he is — and though not to the same degree, Kate’s characterization has followed suit. In Generations: Hawkeye and Hawkeye 1, Kelly Thompson and Stefano Raffaele find something else the two Hawkeyes have in common: crappy mentors.

Like the other young protagonists of the Generations event, Kate Bishop is whisked away to the past (which we now know is a “gift” from Kobik) and arrives on a mysterious island currently in the middle of a “Best Marksman in the Universe” tournament. Clint himself has also been displaced in time and space, whisked away to attend the tournament where he is quickly forced to shift focus to saving the lives of the gaggle of murder-happy villains teleported in along with him. He’s hesitant to team-up with Kate, but she wins him over. It’s not easy — Kate stumbles and improvs her way through it — and both agree to chalk Clint’s trust in her up to “good instincts.” Clint can recognize a kindred spirit when he sees one.

Notably, Kate spends this entire segment of the issue using everything she’s learned about Clint in their time together to her advantage. She clearly knows him very well, or at least thinks she does.

But there’s a difference between knowing about someone’s past and experiencing it firsthand, as Kate discovers when they run across Clint’s old mentor, Swordsman. Clint is briefly forced to team up with Swordsman, but it turns out that his former mentor is, of course, behind the entire tournament, all with the goal of somehow regaining Clint’s trust. Seeing Clint deal with all of this not only gives Kate a new perspective on her fellow Hawkeye, but can’t help but remind her of her own issues with her father as well. 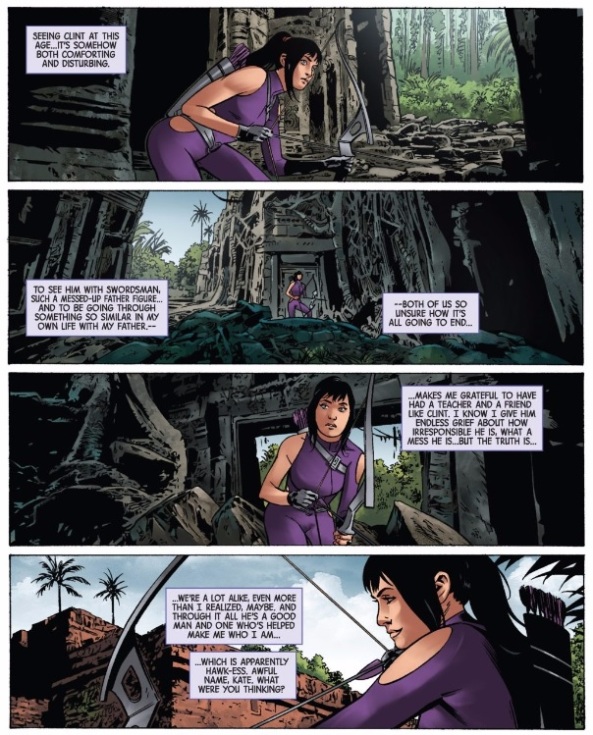 Yeah, if there’s one thing Kate and Clint both have in common, it’s that they’ve had the absolute worst luck with fathers and father figures. The major difference, of course, is that for a long time, those terrible mentors were all Clint had. Seeing this first-hand gives Kate a whole new appreciation for having Clint in her life.

Kate actually has more in common with Clint here than she realizes. Her entire origin is that, when her sister’s wedding was attacked, she leapt in to help the Young Avengers despite having no training, powers, and wearing a bridesmaid dress, just because she knew it was the right thing to do, and eventually stood up even to the Avengers for the team’s right to exist. Like Clint, her heroism came to her naturally despite a severe lack of support — it’s yet another quality that binds these two Hawkeyes together. But Kate is also right when she gives credit to Clint for her own development. She got a mentor at a much younger age than Clint ever did, and even if Kate is learning from Clint’s failures as much as she is his successes, it’s still helped her to grow, allowed her to mature faster than Clint did. That’s something to be grateful for, and with her personal life in such shambles, it’s a nice reminder for Kate that she still has people to lean on who can help guide and support her. Sometimes we just need a better understanding of what our parents/parental figures/mentors went through when they were young to truly appreciate the wisdom and experience they have to offer.

Through it all, writer Kelly Thompson graces this issue with the same deft mix of humor and genuine superhero thrills as she does the main Hawkeye title. I already know she writes a great Kate Bishop, but I found myself surprised by how much I liked her take on this younger Clint, an interesting balancing of both the classic Clint and Fraction’s take. Stefano Raffaele provides serviceable art throughout — I like his jungle backgrounds, and he throws in some fun expressions — but there were a few moments where I found his action sequences a little muddled, especially (unfortunately) in the grand climax. 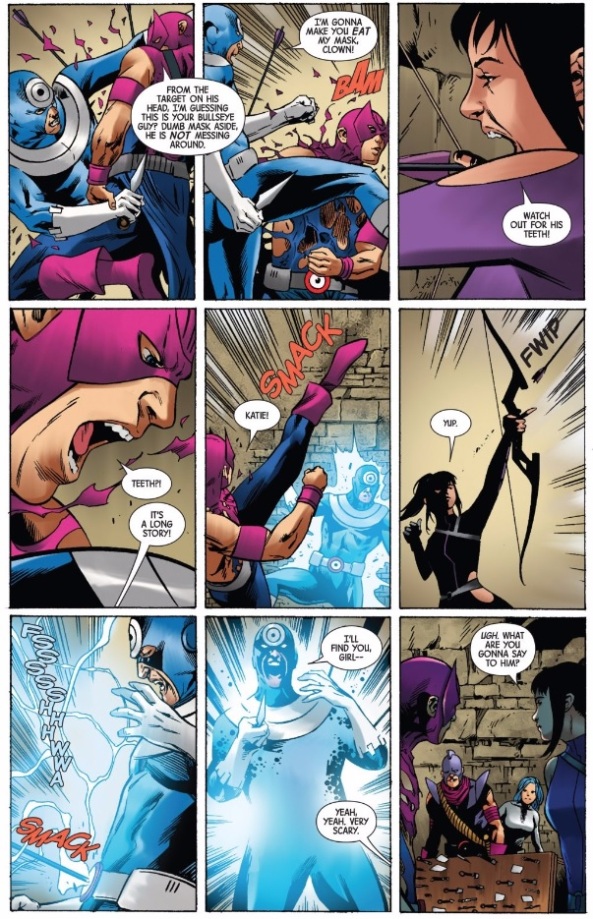 While I love the two mirror image, extreme close-ups on Clint and Kate, the close framing on Clint and Bullseye makes it almost impossible to tell what advantage Kate’s four arrow Domitian assault is actually providing — they just kinda whiz by, endangering Clint as much as Bullseye. And then there’s panel 5 — why does Bullseye start glowing when he hits the wall, before Kate even shoots his belt? It doesn’t look like he was knocked into any sort of machine or anything. It’s a confusing sequences of events that unfortunately blunts the issue’s climatic action sequence. Thankfully, as we’ve discussed so far, the emotional beats still hit with all the force they need.

So Taylor, what’s your take on this one? It’s fun to see the Hawkeyes together again, right? What do you think the deal is with Swordsman’s new protégé, Eden? She’s kind of just a plot device here, but I wouldn’t be surprised if Thompson had plans for her somewhere down the line.

Taylor: I would love for Eden to come back and for us to be able to watch Clint try and hit on her like he says. Something about traveling through time gives characters a “don’t fuck with me” vibe and it would be fun to watch the various Eden rebuffs to Clint’s not so smooth advances. And even if Eden solely is a narrative device, she sets up a nice moment between Kate and Clint.

By “nice,” I mean it’s a moment that’s thoroughly enjoyable, and one that highlights a strength of this issue. Thompson writes the banter between Clint and Kate extremely well. On one level, it’s just plain funny, as is seen above with Kate’s exasperation and her observation that of course Clint’s shirt is torn to shreds. On another level, the banter shows just how well these characters work together within a narrative. These two understand each other and their teamwork is so great because their personalities come together like two cogs in a greater machine. Thompson seems to effortlessly show this relationship to us through poignant banter that is as revealing as it is entertaining.

This banter is present almost from the first instant the two meet and I’m impressed at the way Stefano Raffaele is able to relate this friendship in pictures. After their first testy meeting, the two Hawkeyes sit down at a campfire to lure in some bad guys. While they wait they fall into conversation and Kate asks Clint if she can try on his mask. The resulting panels are adorable.

There’s something about Kate’s “wazzup” face in the second panel that I find endlessly endearing. This reason for this is that Raffaele has so well captured a mannerism that I’ve seen and used many times with my own friends. It’s not the most elegant move by any means, but it’s totally something you do when you’re around your close friends and don’t mind looking kind of like an idiot. Raffaele’s rendering of this here expresses in so many ways the closeness between these two characters that words sometimes simply cannot convey.

This isn’t to say that Raffaele’s art is flawless, however. Like you noticed Spencer, I also felt like some of the action sequences were somewhat confusing. I think the cause of this is the lack of spacing in the action scenes and throughout the entire book. This issue is simply packed with dialogue and action and in some ways, it’s impressive the amount of information that Thompson and Raffaele cram in here. In another way, it’s not impressive when you have confusingly scripted sequences like this one. 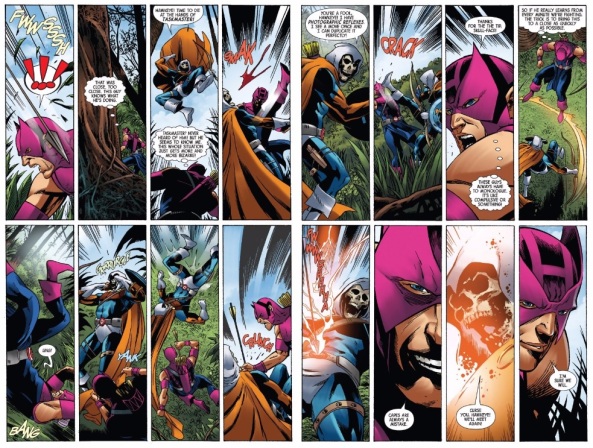 While every page isn’t as cluttered as this one, many of the pages have somewhere in the range of six to eight panels on them. Compounding the issue is the use of a lot of narrow panels give many pages a squished feeling. Now, the use of this number of panels aligned in a particular way isn’t damning, but when the entire issue follows that pattern the entire thing begins to feel somewhat claustrophobic. Many times I found myself wanting to see more of what was off-panel and being frustrated by the white gutters that denied my curiosity. While neither Thompson or Raffaele is to blame completely for this, one could only wish they could have formed a team like Clint and Kate. With such teamwork, the paneling wouldn’t have been a problem.