Mark Waid and Chris Samnee’s take on Captain America is already drastically different from Nick Spencer’s that preceded it, doling out mostly episodic adventures in comparison to the one long story Spencer told, and focusing less on actual politics and more on the idea of Steve Rogers being a good and righteous man, and trying to inspire others to be the same. The return to simpler, more swashbuckling tales has been a nice palate cleanser, especially as readers reacquaint themselves to the original, non-Hydra version of Cap, but I’m hoping we get something a little more substantial sooner rather than later. END_OF_DOCUMENT_TOKEN_TO_BE_REPLACED

Do the citizens of the Marvel Universe adequately compensate their superheroes? There’s little doubt that the entire planet benefits from the efforts of Captain America and his ilk, but whatever gratefulness the citizens feel doesn’t put food on the table. Which is why so many superheroes either take day jobs (with S.H.I.E.L.D. or the Heroes for Hire, for example), institutionalizing their heroic output, are already independently wealthy (like Tony Stark), or have some wealthy patron (like Tony Stark). That notion of patronage hints at what I’m getting at: superheroism is a bit like making art — society may value the idea of it generally, but that doesn’t exactly translate to money in the bank. It’s a lesson Steve Rogers is learning as his journey as a freelance superhero begins in earnest in Captain America 696. END_OF_DOCUMENT_TOKEN_TO_BE_REPLACED 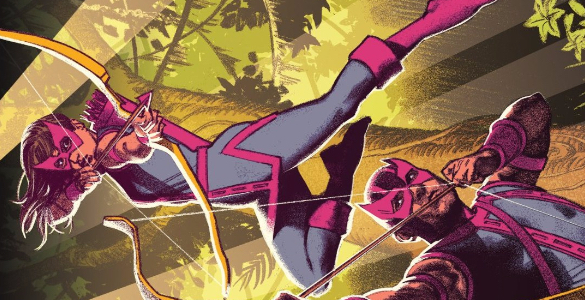 Spencer: Other than a codename and skills with a bow and arrow, what do the two Hawkeyes have in common? Captain America first gifted Kate her codename because “she’s the only Avenger other than Clint ever to stand up to him,” but ever since Matt Fraction’s run, writers have been downplaying Clint’s brash outspokenness in favor of emphasizing what a total human disaster he is — and though not to the same degree, Kate’s characterization has followed suit. In Generations: Hawkeye and Hawkeye 1, Kelly Thompson and Stefano Raffaele find something else the two Hawkeyes have in common: crappy mentors. END_OF_DOCUMENT_TOKEN_TO_BE_REPLACED

Taylor: Often times I wonder what my life would be like had I made an important choice, differently. When I try to make this abstract thought game more concrete, I think about the decision I made of where to go to college. My life would be incomparably changed if I had attended a different university. Different friends, maybe a different major, and most likely living in a different city for the past eight years of my life. Hawkeye 5 at first has us thinking big choices never affect the totality of our lives, but as events unfold, it becomes clear a single choice can affect your life greatly.

END_OF_DOCUMENT_TOKEN_TO_BE_REPLACED

Spencer: Matt Fraction’s run on Hawkeye got a lot of mileage out of a deceptively simple mission statement: “Clint Barton, a.k.a. Hawkeye, became the greatest sharpshooter known to man. He then joined the Avengers. This is what he does when he’s not being an Avenger.” What Clint does when not being an Avenger is an insanely broad concept, but in Fraction’s run it quickly narrowed into a focus on how Clint handled loss. When tasked with the duty of following up on a run as iconic as Fraction’s, it’s no surprise that Jeff Lemire flipped everything on its head, changing the mission statement to “This is what [Clint Barton and Kate Bishop] do when they do what they do best.” Lemire’s concept of focusing on Clint as a super-hero is even broader than Fraction’s, and as I’ve pored over the last few issues of All-New Hawkeye, I’ve been waiting for his story to similarly build some kind of deeper overarching theme. This month’s issue in particular is almost screaming that it has some sort of deeper meaning or underlying message, yet I’m struggling to come up with one. I’m starting to think that I’ve been approaching this title all wrong. If this is a book about what Clint and Kate do when they do what they do best, then maybe what’s most important are the actual details of what they’re doing. Fortunately, those details are pretty charming. END_OF_DOCUMENT_TOKEN_TO_BE_REPLACED