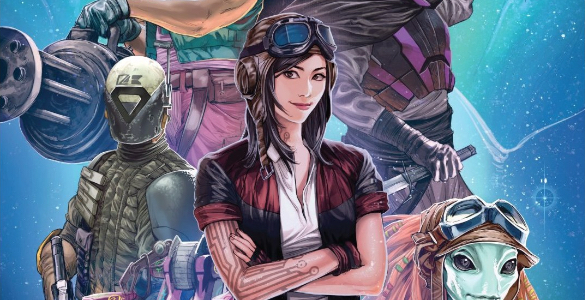 A lot of the time when I think about what makes Star Wars so much fun I think about the memorable characters. Darth Vader is the perfect villain, Han is the archetypical anti-hero, and Leia is the strong willed leader who won’t let herself or others fail. While all these characters are great, I have to admit that in many ways they’re pretty flat characters. Sure, you can argue that Leia, Han, and Vader all undergo a journey and gradually change, but none of them undergo a transformation that literally changes who they are. What I’m getting at here, is that Star Wars is sorely lacking in complex characters. It is for this reason, however, that Magna Tolva is such a welcome addition to the universe.

When last I wrote about Dr. Aprha, I complained about the lack of development of this same character, so it would appear I owe Kieron Gillen and Si Spurrier an apology. The reason I say this is because Tolva’s just so damn enigmatic. As she awaits her execution for earning three demerits, Tolva is understandably bummed out. When she is granted a surprise reprieve just in the nick of time, this doesn’t stop her from exacting revenge on those who would have been her killers.

By issuing a demerit to this luckless Imperial officer, Tolva is effectively signing his death warrant. Whereas it was easy to feel sorry for her just a page before this, here she once again shows that she is someone to fear. More than that, it shows that despite the softer side of her we see in her romantic interest for Aphra, Tolva is still cold blooded at heart and not exactly an object of sympathy.

This makes Tolva hard to pin down, and that complexity is wonderful. While Aphra herself has a lot of conflicting interests, I still get the sense that I know how she’ll react to any given situation. Maybe that’s simply because I know her better through past issues, but I think a lot of that is because she’s an easier character to interpret. Tolva, on the other hand, is unique in her unpredictability, and this makes her (and all of the Star Wars Universe) more interesting.