We all love a good one-off or anthology, but it’s the thrill of a series that keeps us coming back to our comic shop week-in, week-out. Whether it’s a brand new creator-owned series or a staple of the big two, serialized storytelling allows for bigger casts, bigger worlds, and bigger adventures. That bigness was on full display this year, as series made grand statement after grand statement about what they were all about. These are our top 10 series of 2017.

Black Bolt is frustratingly unknowable. A stoic, necessarily silent monarch, we’re more familiar with him as a costume and a power-set than an actual (in)human person. The flipside to that unknowability, though, is that being Black Bolt must be a kind of lonely experience. It’s that kernel of truth that Saladin Ahmed and Christian Ward have built their series around, isolating Bolt even further from his friends and family, opening with him languishing in a cruel and unusual space prison. Forced to fight for freedom alongside his fellow prisoners (a class of people we heretofore rarely saw in the same room as Black Bolt), Blackagar proves himself again and again, pausing only to reminisce about where he came from. The result is a startlingly assured portrait of one of Marvel’s most aloof characters.

The Wicked + The Divine is the longest running series on this list, and it’s one that’s only gotten better with age. Writer Kieron Gillen closed out 2017 on a series of twists that have changed the entire foundation of the series (all but necessitating a reread), but even before then he continually deepened his characters, their history, and their relationships with each other, the world around them, and their very godhood in challenging and satisfying ways, even when the characters themselves felt lost and aimless. Artists Jamie McKelvie and Matthew Wilson continued to provide the series with an aesthetic deserving of a young pantheon of celebrity gods, bright, gorgeous, and effortlessly cool, but never without depth, nuance, and real emotion. WicDiv can be a blockbuster spectacle, but one with real wit, heart, and meaning, and that doesn’t look likely to change any time soon.

8. Eleanor and the Egret

Whenever I explain Retcon Punch to someone new, I say that we endeavor to analyze comic books as the works of art and literature that they are. It’s a kind of assertion that there’s no such thing as “low art” or “high art” and meaningful experiences can come from any medium. That’s not a fight I need to pick here, but I mention it only to say that Eleanor and the Egret lives that ethos, celebrating art as an aesthetic end in and of itself. John Jayman crafts a lumpy museum heist that simply strives for opportunities to enjoy both the art within the story and the art on the page. Sam Kieth’s style is as broad as his influences, at times channeling Tin Tin, street grafiti and the surrealist masters all in the same breath. If that sounds too heady and too artsy-fartsy for you, the actual plot of the series revolves around Eleanor and her magical talking bird friend reclaiming her artistic abilities from the villainous Anastasia Rüe. High art and low art, all mixed together until it don’t matter what you call it. 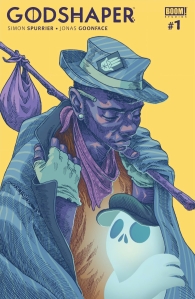 Godshaper 1 dropped us into a world where technology had stopped working and instead, virtually everyone now has their own personal “god” — a magical pet that serves as “part ornament, part assistant, part bodyguard, part bank.” That’s a hell of a premise, but creators Simon Spurrier and Jonas Goonface dug a bit further, following Ennay, a “godshaper” — one of the few humans who don’t have a god, but can instead remodel and improve those of others. That role is one full of contradictions, at once needed and abhorred by society, but it allowed Godshaper to comment on anything and everything that divides us, from race, class, and sexual orientation right down to the types of music we listen to. Spurrier and Goonface ultimately have a message about those divisions, but cleverly keep the scope of their story small — Ennay may be able to change the hearts and minds of the people around him, but he’s going to have to do it one underground concert at a time. The result is a story that feels honest and unembellished, even as it’s set in a much bigger, much more colorful world.

Gwen Poole’s greatest strength has always been her knowledge of Marvel Comics, but throughout 2017 Christopher Hastings, Gurihiru, and Irene Strychalski truly put that thesis to the test, not only by challenging her actual knowledge of the (always changing) Marvel Universe, but by asserting that knowledge alone is not the be-all, end-all of comic book fandom. In a year that found Gwenpool honing radical new powers, the greatest revelation was Gwen growing a conscience, deciding that she loved Marvel’s characters more than she loved herself, even if it meant cutting her series tragically short. The metatextual gags that have made The Unbelievable Gwenpool so engaging were more present (and fun!) than ever this year, but what truly made this series one of the best of 2017 was its surprisingly heartwarming lessons about what it means to be a hero, a friend, and a fan. 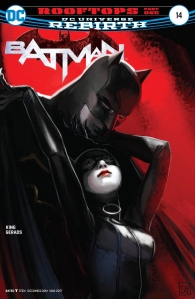 Tom King found his footing on Batman this year, delivering arc after breathtaking arc that challenged some of our most basic assumptions about the character and his rogues gallery. King reversed the premise of Arkham Asylum in “I am Bane” and built an epic around the origin of Kite-Man in “The War of Jokes and Riddles.” But the beating heart of the series this year was Bruce’s relationship to Selina Kyle, carrying them from their first meetings (in Batman 1 or Batman 404, depending on who you ask) to their final goodbyes in the distant future. Bruce’s proposal may have made for a shocking headline, but King has spent every issue since making it clear how Bruce and Selina can justify this to themselves, if not the entire world. All the while, a murderers’ row of artists have turned in career-defining work, including Mitch Gerads, David Finch, Jason Fabok, Lee Weeks, Michael Lark, Mikel Janin, Joëlle Jones, and Clay Mann.

Dan Slott and Michael & Laura Allred’s final year of Silver Surfer exemplified everything we’ve loved about this series from the very beginning. Norrin and Dawn’s episodic adventures continued to take them to grand and creative new worlds, challenging readers on issues of humanity and cultural respect and digging into some satisfying metatextual concepts as well. All these adventures eventually built up to a devastating, life-affirming final story that moved at least one Retcon Punch staffer to tears. Slott and the Allreds didn’t just create one of the most satisfying romances in all of Marvel, they literally seeded that romance and its legacy into the very core of the Marvel Universe. Silver Surfer was a series about love and loss, about wonder, about legacy, and it’s not one we’ll soon forget. 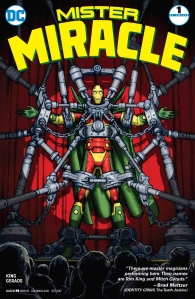 That line serves as Scott Free’s justification for attempting suicide — and as an articulation of Mister Miracle’s logline — but we must take it with the grain of salt that he’s telling this story on a talk show. That caveat of artifice and showmanship permeates the series, making it difficult to parse Scott’s innermost feelings from the front he puts up. Actually, it’s difficult for Scott to parse, too, as his own reality seems to be coming apart a bit. Is he justifying his actions to a television audience, or himself? Was he attempting to escape death, or his own depression? It’s a heavy, heady series that Tom King and Mitch Gerads have crafted, peeling away the carnival barker-y language that accompanied Mister Miracle’s earliest appearances to find the broken man underneath. 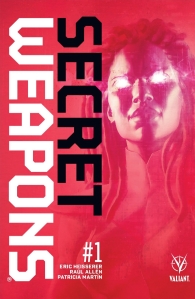 In addition to being one of the best comic series of the year, Valiant’s Secret Weapons is also one of the most approachable. Despite being birthed in the decades-burning furnace of a shared superhero universe, the series is stubbornly focused on new characters, treating them as the curiosities they are to both the reader and established pillars of the Valiant universe. Writer Eric Heisserer created a cast of misfits that were one step outside of their origin, and sought to tell a two-pronged story about them. First, how they have value, despite their weirdo powers and lack of status. And second, how they come together as a team. Nikki and Owen and Avi are all instant classic-characters, and the artistic team of Raúl Allén and Patricia Martín leverage precision and energy to imbue them all with that kind of flashy superhero action that got us reading comics in the first place. It’s a wonderful assertion that greatness can come from anywhere — even from a lady who can talk to birds. 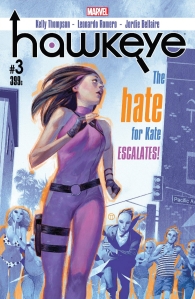 It’s impossible to discuss this series without bringing up that other seminal Hawkeye series — you know, the one that focused on the non-Avengering part of its heroes’ lives, all with a wry sense of humor and iconic artwork. The parallels are obvious, but that shouldn’t diminish the singular achievements of this series. Indeed, while Kelly Thompson and Leonardo Romero have certainly captured the spirit of Fraction and Aja’s Hawkeye (perhaps more than any series in the years since), they’ve channeled it into something distinctly their own, reconciling Kate’s past with the body image and identity issues that permeate her L.A. setting. Those are heavy subjects, but Thompson approaches them with a light touch, wielding Kate’s incompetence and penchant for groan-inducing jokes to great effect, and Romero keeps thing breezy with an effusive sense of action and setting that is a delight to behold. The result is a series that captures everything we love about Hawkeye, but pushes its characters and their stories in exciting new directions.

The conversation doesn’t stop there, because your list is almost certainly different from ours. What were your favorite series of 2017? For more of our Best of 2017 coverage, check out our Best Covers, Best Issues, Best Writers, and Best Artists lists!