“Spinoff!” Is there any word more thrilling to the human soul?

Drew: That epigraph might seem a bit glib, but while I understand the criticisms spinoffs get for being uninspired or safe, I’d never dismiss a spinoff as a matter of course. Case in point: The Simpsons is technically a spinoff from The Tracey Ullman Show, but that didn’t stop it from becoming arguably the greatest sitcom of all time. And actually, the discrete nature of The Tracey Ullman Show might just have been part of what makes The Simpsons so successful — there isn’t the temptation to feature cameos from the original show, the way Frasier might with Cheers, for example. That is, The Simpsons could operate in its own world, untethered to the sensibilities of its origin. Unfortunately, despite the decades that separate The Rise of the Black Panther from its main series, it never really manages to form its own identity.

Part of that may just be first issue jitters, but I’m struggling to identify exactly what this series is meant to be. Should we primarily be reading it as a prequel to the main series (perhaps even simply as a flashback within the narrative of Black Panther), or is the idea that it would work on its own? I must admit, it’s difficult for me to imagine T’Challa’s conflict with Klaw having any kind of satisfying resolution here, as we’ve already seen it fascinatingly unresolved in the pages of Black Panther, so I’m not entirely sure what this narrative will be doing.

Though I will admit, it’s hard to guess based on this issue. Framed as letters from T’Challa’s mothers (birth- and step-), we spend most of our time with T’Challa’s father and grandfather, leaving little room to get to know the boy who would be king. (Indeed, his birth doesn’t occur until the last few pages.) So the focus of future issues is bound to shift, though that leaves this issue feeling a bit like the prologue of a prologue, taking our interest in the past 75 years of Wakandan history for granted. I have confidence that every piece of information writer Even Narcisse introduces, from the isolationist voices in T’Chaka’s council to the politics surrounding T’Chaka’s second mariage, will play an important role in the series moving forward, I just wish they played more important roles in this issue.

Much of the issue is cluttered with dense text about sociopolitical issues we don’t have a ton of context for — are we meant to simply connect this moment to the civil turmoil in Black Panther, or will this exposition pay off in a future issue of this very series? It really isn’t clear. Instead, these feel like little more than info dumps, relying more on our good faith than any narrative justification for their existence.

All of that text is a particular bummer, given what a fantastic job Paul Renaud is doing on the art underneath. I’m particularly fond of the scene where T’Chaka convinces N’Yami to join him at the palace: 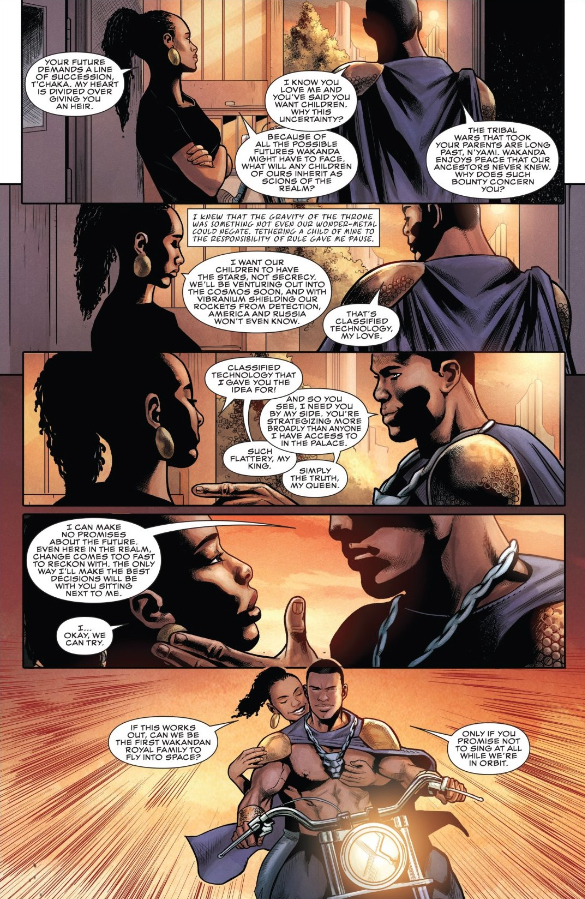 It’s by turns sweet and sexy, perfectly capturing the energy of young lovers making plans for their future. And those plans are actually really exciting. I’m not really sure if Wakanda’s space exploration will be explored here or in the main series, but the promise of following up on that thread might just bring me back for issue 2.

Ryan, I’m struggling to even form an opinion of this issue — it read more like a discursive intro page than a proper first chapter. Have I just calibrated my expectations poorly? Were you able to get any more out of this survey of T’Chaka’s life than I was? Is there anything that excited you about this issue that I missed?

Ryan D: I’m right there with you, Drew. This issue tried so many things that I’m not sure exactly what it was. I loved many of the individual ideas being playe with here, but I think I need The Rise of the Black Panther to settle on one or two of them to really sing to me.

For example, the idea of the relationship between T’Chaka and his wife, the premiere scientist in Wakanda who can bend vibranium to her will with ease, is lovely. As opposed to T’Challa, who is a master scientist (literally every science from what I’ve read), seeing his old man lean heavily on the brains of his partner, N’Yami, was very enjoyable. If this whole issue were a love story between the king and his future queen, I’d be all for it. I’m a sucker for romance and I thought the relationship dynamics between T’Chaka and N’Yami were solid in the small time it had on the page. But this wasn’t a love story, really.

What else isn’t this first issue? Well, it wasn’t wholly the story of outsiders trying to test the Wakandan borders, but I think that’s the angle with the most narrative potential, or at least thematic potential. Through these invading forces, we get glimpses of the Wakandan psyche which is unique to this fictional country. After all, no other African nations were able to rebuff colonial imperialists because their technology was decades ahead of the invading forces. Considering that technological superiority was one of the pillars which Colonialists used to justify their forays into the dark heart of Africa, the White Man’s Burden ethos of bringing progress into the untamed wilds doesn’t hold up in this world. With that being the case, I’d love to see more of the Wakandans deal with their race relations with the white outsiders. Moments like this sow the seeds: 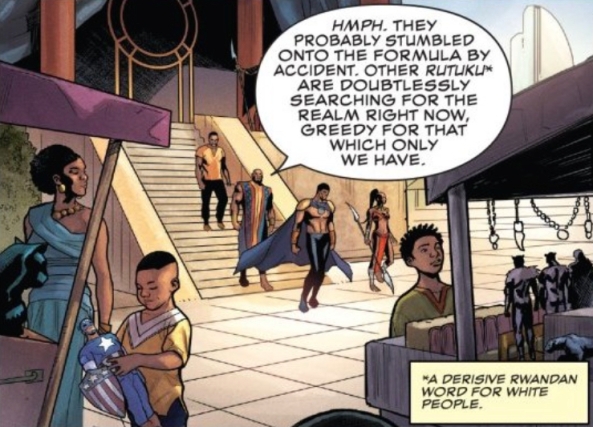 While world history is often viewed through a very white, Christian, Euro-centric lense, what happens if the deck is stacked the other way? Here’s an extreme example, but what if the Wakandans had an analogue for phrenology when it came to their efforts of understanding the white folks who they encounter? Do the Wakandans hold some sense of duty towards the simple, bellicose white cultures who seem bent on destroying each other? How do Wakandans react when they are exposed to the deep-seeded racism which has been running rampant in the rest of the world for centuries? Would that cause them to be more isolationist or move them towards a more Pan-African mindset, despite their continuing wars with neighboring Azania?

I also feel like the elephant in the room here is the planet of Bast. Introduced all the way back in Hickman’s New Avengers, the planet has been shown periodically in comics, but this title sets up some of the technological groundwork for the Black Panther to be spending some time up in the stars. How a ruler can successfully do their royal duty when they’re off in space is something which I feel like Coates would like to explore, but I am keen to know more about how that planet fits in to Wakandan politics and world-view.

So The Rise of the Black Panther 1 leaves me with many curiosities, but not much satisfaction. It feels a bit like a free comic which might be given out before going to see the Black Panther film to catch people up on the character, which — thus far — does not boast the sweeping ideology of Coates’ main series or the tighter (yet cancelled) focus of Black Panther and the Crew. I might pick up issue two just to see what the heck Narcisse might do as a next step forward, to see how he’ll use Namor to establish the rocky relationship between Atlantis and Wakanda, and to see whether this spin-off can move from being an illustrated history text to a full-blown story.