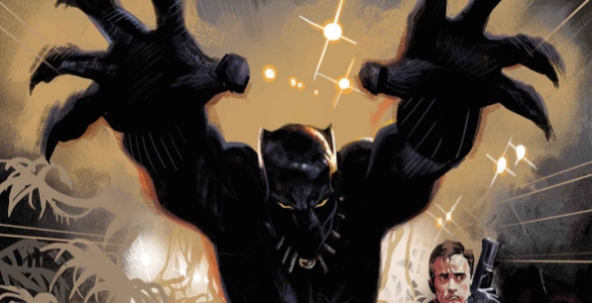 Drew: Over the past two weeks, countless articles have been written about the world-building in the Black Panther film. It’s obviously something the movie does remarkably well, combining a kind of anthropological survey of African culture with a sci-fi utopia for an Afrofuturist aesthetic that is unique in the world of blockbuster movies. Moreover, that world-building was essential in ingratiating a new audience to the character and his home country, implying a rich culture that stretched far beyond what we saw on the screen. Of course, superhero comics — especially long-running ones — are often more interested in what has already been built than they are in what is new, trading on our nostalgia for familiar events and characters in a way that a single film obviously can’t. There’s certainly a case to be made for honoring the storied history of any character in that way, though the approach may be at odds with appealing to newcomers (who may have been brought in by, say, a widely popular movie), all of which puts Black Panther Annual 1 in a difficult position. Is it aimed at newcomers looking for an approachable entry into comics after seeing the movie, or is it aimed at long-time readers who are already duly familiar with the character’s history?

I’ll confess: I’m closer to that former category than to the latter. I’ve read Black Panther in Avengers titles for years now, but my only exposure to his solo series has been the current volume, under the pen of Ta-Nehisi Coates. Which means I’m totally unfamiliar with the esteemed creative teams on this annual, as well as the Black Panther stories that made them so esteemed. But this issue manages to catch me up with the tone and era of these stories without any real confusion.

Some credit there must go to editors Wil Moss and Sarah Brunstand, who frame the issue on the credits page as having three stories, one “set in the present,” one “set in an alternate past,” and one “set in an alternate future.” Combined, these designations suggest we don’t need to have any real knowledge of the character’s past, present, or future, as those things may not even be true in the stories we’re reading. This is an anthology of the kinds of stories Black Panther can appear in, driving the creators to take a more thematic approach to the character, getting at what is important to him and his world without getting caught up in chronological detail. The result is an issue that should be satisfying both to folks already in love with that range of themes and stories, and those discovering it for the first time.

The first, set in the present, manages to avoid any of that inside baseball stuff by framing it as an interrogation of Everett K. Ross, so any details about the Black Panther and his world is necessarily explained to us in terms we can understand. It also features Nakia and leans into the international espionage that made the South Korean sequence of the film so fun, giving movie fans something to latch onto, even if some of the details are different than those of the film.

Actually, writer Christopher Priest seems particularly aware of how this story might be read in dialogue with the film, lampshading the britishness of Ross’s on-screen portrayer, Martin Freeman: 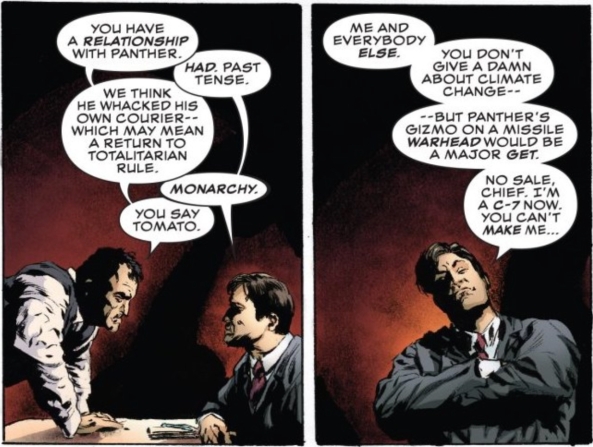 As a matter of fact, neither Freeman nor indeed “everybody else” pronounce it “tomayto,” as British people pronounce it “tomahto.” It’s a goofy nod to the movie, drawing our attention to its fictionality, even as this story offers decidedly different takes on the characters and their world. Here, Nakia is a (former) Dora Milaje, and not quite an ally to Black Panther complicating their more straightforward relationship in the film.

Don McGregor and Daniel Acuña’s “Panther’s Heart” offers a similarly interesting dialogue with the movie. McGregor’s script emphasizes the themes of death, sacredness, and even isolationism the film grapples with, focusing a great deal on the “heart-shaped herb” that plays such a significant role in the movie. Meanwhile, Acuña’s art manages to capture (and in my opinion, outpace) the grace and athleticism Black Panther displays in the film, cramming multiple Panthers into single panels to transcribe his acrobatic feats. 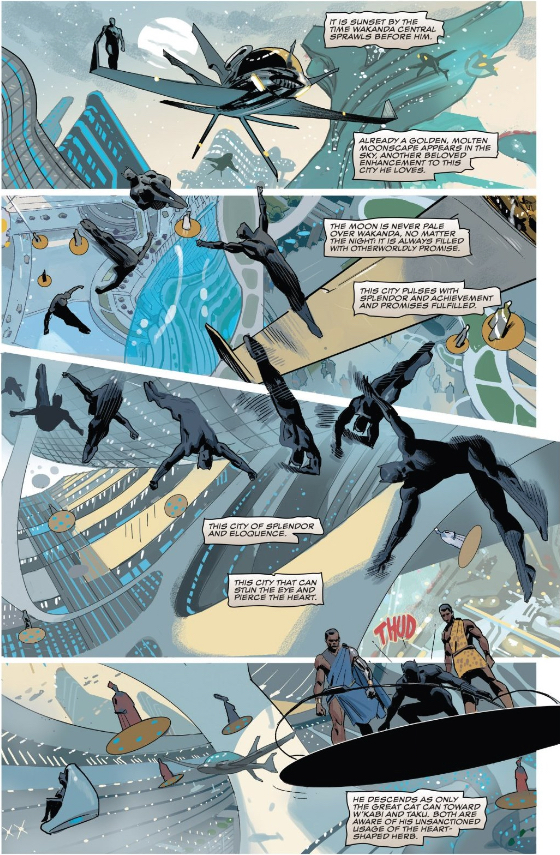 The final story, Reggie Hudlin and Ken Lashley’s “Black to the Future Part II,” might be the most mythologically heavy of the issue, but its status as an alternate timeline story makes it perfectly approachable. Indeed, while the story is a follow-up to Hudlin and Lashley’s 2008 Black Panther Annual 1, set in the world of a Wakandan empire, it is again framed as a story — this time one T’Challa is telling his granddaughter — so any alterations are explained to us clearly enough. Aside from that mythology, the story is a little thin — mostly just T’Challa wishing to retreat from his life of making war — but the world is richly realized enough to appeal to fans of the world-building of the movie.

All in all, I’m quite pleased with this annual — it stayed true to what I knew of the character, while hinting at a broader world and history that it managed to make genuinely intriguing. Ryan, I’m excited to hear your thoughts on this issue. Are you any more familiar with these chapters from Black Panther lore than I am? If so, were you pleased to revisit them? If not, were you at all intrigued by them?

Ryan D: Man, Drew, this issue certainly proved to me how little of Black Panther’s canon I know, even after covering the slew of Black Panther titles over the past few years: the flagship title, World of Wakanda, Black Panther and the Crew, and Rise of the Black Panther. Despite all of this, upon opening this issue up, I immediately have no idea who Agent Ross is or why he is significant because 1) I had yet to see the film and 2) I missed all of Priest’s run. I didn’t even know who Priest was, but found a great article detailing his career with Marvel and DC which takes a hard look at both his successes and failures.

Fortunately, the opening story,”Back in Black”, offers itself a pretty forgiving and accessible narrative structure to catch readers as clueless as I am up to speed. Ross, as a character, is a delight to read. He comes across as comically self-serving and so completely tone deaf to many of the big conventions which I associate with a Black Panther title. 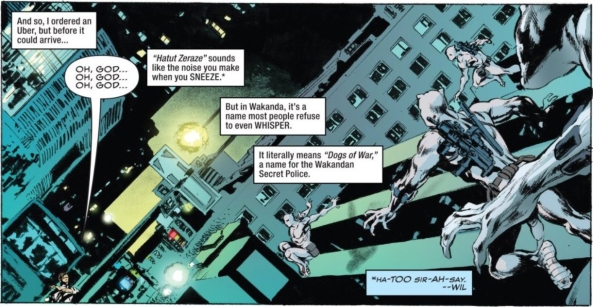 For a man who purportedly boasts a past relationship with T’Challa and spent some significant time in the nation of Wakanda, Ross is glib when talking about the names of War Dogs and other facets of Wakandan culture, which flies in the face of Coates’s approach, who unapologetically asked new readers to understand African terms primarily via context or precedent. Ross, however, isn’t there to save the world or be an ally to Wakanda. He just wants to enjoy his new promotion and the perks of being a bureaucrat, i.e. not being chased by people with superpowers. His unabashed selfishness allows the audience to see his cultural buffoonery as comical instead of malicious, in the same way that audiences can still connect with the gang in It’s Always Sunny in Philadelphia despite their atrocious actions revolving around some of the most contentious contemporary issues. Overall, it made me curious to go back and read Priest’s run to see how else he used other characters to frame the intimidating and stately T’Challa.

While I hear many die-hard Panther fans talk warmly — though perhaps not as reverently as some of the series runners who came on later — about McGregor, my big takeaway from this chapter seemed to be that there is a heart-shaped plant which is both sacred and powerful. I, personally, never knew that the Panther sported any augmentation aside from the technological, which is why I’ve so often linked T’Challa in my mind to being the African Batman. The plot here reads more like a dirge or memento mori rather than a story, and I couldn’t help but feel like McGregor’s prose in the caption box, with its grandiloquent feel and romantic qualities, did not jibe with what I feel is the vocabulary of Black Panther — as ironic as that may be seeing as McGregor carried the title for such a long time back in its formative years.

When it comes to “Black to the Future 2”, though you may be right about the lack of concrete objectives in T’Challa at this point, Drew, I really enjoyed the collection of snapshots that Hudlin and Lashley shared with us. In comics, most of the magic happens between panels rather than in them, and in this chapter, most of the “narrative” happens between the images of the trophies collected by Supreme Leader King Panther: 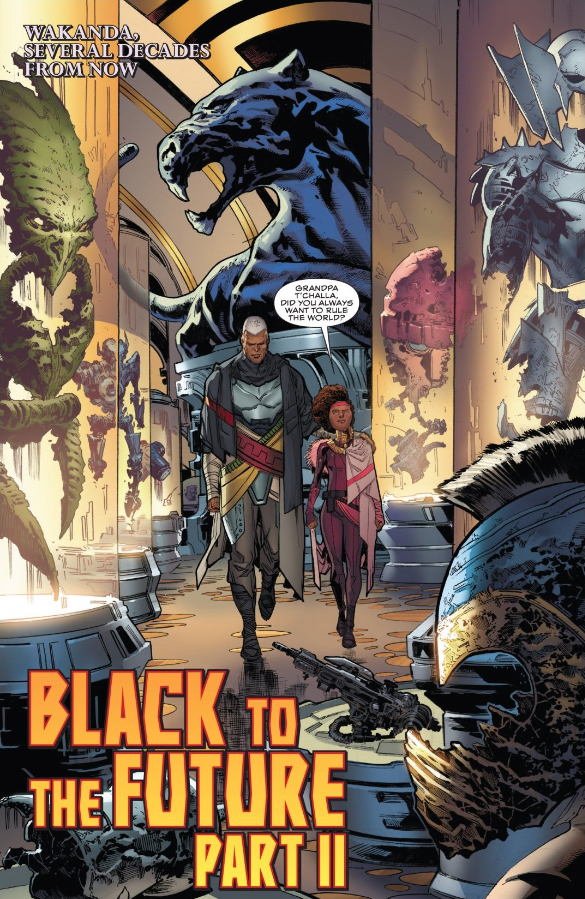 While this might be an easy convention to use, I could not help myself from nerding out and playing out the battle scenarios between Black Panther and Magneto in my head, as I might with action figures as a kid. That being said, I think “Black to the Future 2” works best as a kind of coda to this annual, or would even play as an issue #0 kind of deal if a series was ever made of this Wakandan Empire scenario. My only wish is that they made mention of the planet of Bast and how that made the dominion not only global, but also galactic.

Coming out in this amazing, liminal time-frame when someone who’d never read a comic before might seek out a shop and buy a title off the rack after seeing the film, Black Panther Annual bears the heavy responsibility of possibly being the first Black Panther title someone ever reads. While I think the stories here do an admirable job and tie in well with the film, part of me wishes that a short tale from Coates was included here as well, so that anyone new could experience what the character and series have become while we celebrate from whom and where it began.