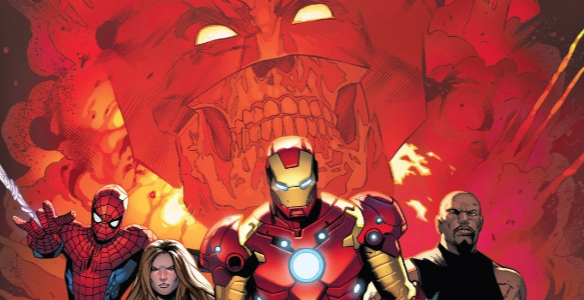 There’s a joke amongst fans that if a team exists in the Marvel Universe, Wolverine has been a part of it. This is an exaggeration — it’d be funny to see him joining up with the Champions or Young Avengers, but it hasn’t happened yet — but only slightly. Logan’s prolific stature in the Marvel Universe is what allows for an event like Hunt for Wolverine, which rounds up as many characters with connections to Logan as possible, no matter how tangential, from every corner of Marvel’s vast universe. It’s a bit of a bait-and-switch, as bringing in all these characters has so far (in the two issues of Hunt for Wolverine thus released) led to stories that are rather light on Wolverine himself. Tom Taylor and R.B. Silva lean into that idea in Hunt for Wolverine: Adamantium Agenda 1, pulling a bait-and-switch on their cast as well as their readers. Logan’s former New Avengers teammates think they’re rescuing Wolverine(‘s genetic code), but it turns out they’ve stumbled into a very different, much more personal scenario. END_OF_DOCUMENT_TOKEN_TO_BE_REPLACED

Taylor: At some point during the Christmas holiday I looked up from my cell phone and realized a number of my family (including myself) weren’t talking to each other. Instead, we were hypnotized by the small, glowing screen in each of our hands. Something about this felt wrong and I felt a stab of guilt in realizing that this wasn’t the best way to spend time with my family. Resolved to do better, I put my phone in my pocket and got ready to make some conversation because at the end of the day, isn’t that what the holidays are really about? Connecting with people? Most would say yes and can count on the first annual issue of Power Man and Iron Fist to back up their opinion.

END_OF_DOCUMENT_TOKEN_TO_BE_REPLACED

Spencer: Befitting her job as a private investigator, mystery is a vital element of the Jessica Jones mythos. It’s probably why my favorite episode of the Netflix series is the one that put the ongoing Kilgrave story on hold to solve an unrelated case of the week, and it’s also why the first issue of the new Jessica Jones relaunch works so well — Brian Michael Bendis and Michael Gaydos don’t just build a mystery around Jessica’s newest case, they turn her very life into a mystery that the audience, and perhaps even Jessica herself, need to solve. END_OF_DOCUMENT_TOKEN_TO_BE_REPLACED