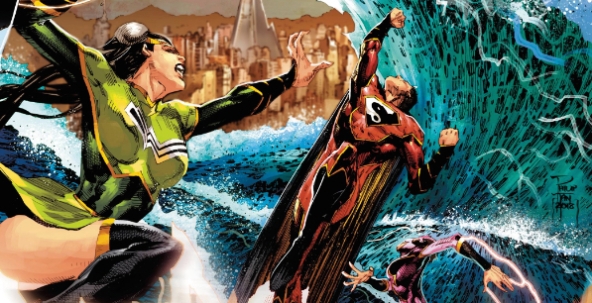 It’s taken me twenty-three issues, but I am finally coming to terms with the kind of book New Super-Man is, versus the book I want it to be. What it is is a plot-driven book that smooths over its rough patches with sheer momentum and the clever mash-up of Chinese folklore with DC mythos. What it is not is interested in meditating on the themes it employs to drive its plot. END_OF_DOCUMENT_TOKEN_TO_BE_REPLACED 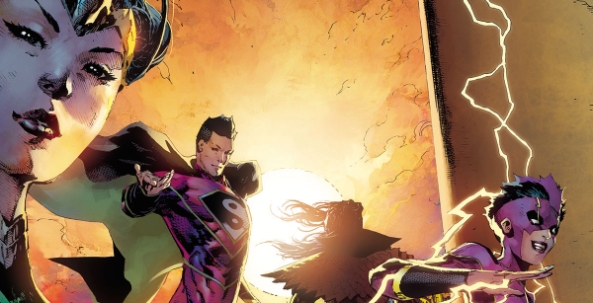 Ahn Kwang-Jo, aka the Aqua-Man of North Korea, aka Dragonson, is so conditioned by his life under the authoritarian regime of North Korea to accept the word of authority figures as truth that when the old sea dragon bones responsible for his powers commands him to generate a flood large enough to kill millions of his countrymen, Kwang-Jo feels compelled to obey. He’s briefly conflicted, but his resistance is met with anger by his “true father”, and Kwang-Jo quickly acquiesces.

END_OF_DOCUMENT_TOKEN_TO_BE_REPLACED 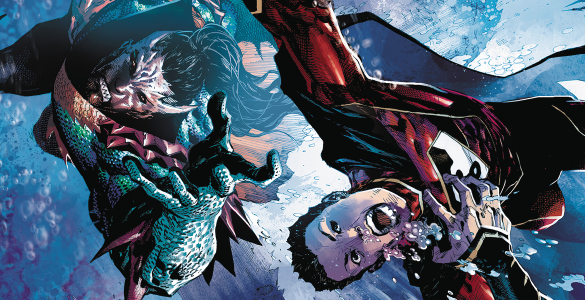 Political commentary is not New Super-Man and the Justice League of China 21’s forte. It’s mostly informative in the sense that characters are literally declaring information, like when Bat-Man flatly proclaims that, “North Korea is an asylum inmate that only listens to China…” But while the political message of the book lacks nuance, that writer Gene Luen Yang bothers to go there at all is commendable. If every comic book is someone’s first comic books, than every fleeting discussion of Sino-North Korean politics is someone’s first fleeting discussion of Sino-North Korean politics — and that’s worth celebrating. (Information is power!) END_OF_DOCUMENT_TOKEN_TO_BE_REPLACED 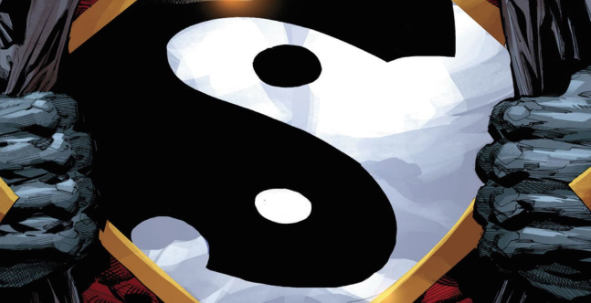 Spencer: There’s a common belief that kids raised in sheltered, restrictive environments will go absolutely wild at their very first taste of freedom. I don’t know if the truth is that extreme — I was about as sheltered as they came as a child, and all my rebellions have been rather tame — but there is a lot of truth to the idea that needless restrictions and censorship just hurt people, regressing emotions and hindering growth and in many cases leading to actual physical punishment for meaningless offenses. New Super-Man and the Justice League of China 20 taps into the latter when it introduces its new “Aquaman,” Ahn Kwang-Jo. END_OF_DOCUMENT_TOKEN_TO_BE_REPLACED

Drew: What do we expect when we read Deadpool? When I picked up my first issue just over a year ago, I was looking for a famously goofy character written by famously funny writers, and thought that issue delivered everything a Deadpool comic should. Then we published our first discussion, and started one of the longest, most in-depth comment threads we’ve ever had, all about how this version of Deadpool is missing the point entirely. It’s a strange contradiction, but comics are full of them. Is Batman a brooding spirit of vengeance or a campy man-about-town? Is Wolverine a violent savage or an impatient schoolmarm? Or, more to the subject at hand, is Wade Wilson an irreverent, fourth-wall-breaking yukster, or a tragic figure of the highest order? With the conclusion of their “The Good, the Bad, and the Ugly” arc, writers Brian Posehn and Gerry Duggan make the strong case for “both.” END_OF_DOCUMENT_TOKEN_TO_BE_REPLACED

Drew: Color theory has always had an interesting relationship with superhero comics. To make the heroes stand out on the printed page, they were put in bright, primary colors. That practicality had a counterpart in the way the characters were written — with equally clear ideals (think “truth, justice, and the American way”). Those ideals (like the colors) can be mixed in ever more complex ways, covering all of the possible hues, but as any colorist can tell you: hue is only one dimension of color theory. Another is saturation, or the opacity of a color. Deadpool, with its knack for fourth-wall breaking, has long had a lot of play with this kind of figurative saturation, as Wade regularly peels the curtain back to comment on the absurdities of the world he inhabits. Desaturating Wade has always revealed a bright, zany world — even when disembowling presidents, the tone was always incredibly upbeat — but as writers Gerry Duggan and Brian Posehn move further into their “The Good, the Bad, and the Ugly” arc, they’ve revealed an increasing interest in the third dimension of color theory: value, or darkness. The result is a surprisingly rich comic, made up of all of the colors of the real world. END_OF_DOCUMENT_TOKEN_TO_BE_REPLACED

Scott: “Ok, so you’ve got Brian Posehn and Gerry Duggan, right, and they’re writing about Deadpool.” (“Oh man, this sounds funny!”) “And Deadpool is teaming up with Wolverine and Captain America.” (“Whoa, this is gonna be classic!”) “Oh, and there are a bunch of Korean X-men look-alikes running around.” (“I don’t even know what that means, but you probably don’t even need a plot at this point, this sounds like the craziest issue ever!”) So what happens when you take all elements for great laughs and hi-jinks, and try to make it dark? Posehn and Duggan have pushed Deadpool into grim territory in recent issues, and they’ve been some of the series’ best. They seem intent on recasting Deadpool in a more serious tone. But sometimes, when all the elements are there, there’s nothing a writer can do to prevent a rollicking good time.

END_OF_DOCUMENT_TOKEN_TO_BE_REPLACED

Scott: It’s nice when someone surprises you with their depth- when you see something that wasn’t there before. It happens a lot with comedic actors taking on dramatic roles. Think of Adam Sandler in Punch Drunk Love or Jamie Foxx in Ray. Robin Williams and Jim Carrey are masters of this trick. You’ve always enjoyed them but then, suddenly, they do something that makes you take them seriously. This is that moment for Deadpool. Writers Brian Posehn and Gerry Duggan have taken a title known for its crude jokes and it writers’ resumes, and turned it into something so much more. The wit is still there, but the darker side of Deadpool they’ve been hinting at is now out in the open, and they’re pulling it off better than you could have expected. You’ll never look at this title the same way.

END_OF_DOCUMENT_TOKEN_TO_BE_REPLACED

Shelby:  When I started reading comics a year ago, I never thought I would be reading and enjoying a soldier title. But when Jimmy Palmiotti tells you at a convention to read a book because “dinosaurs,” you have to at least give it a try. This title is really two titles. The War that Time Forgot is the story of a black-ops group investigating issues in North Korea and finding DINOSAURS; a fight ensues. This book also includes a back-up/additional story of The Unknown Soldier, and it’s this story the zero issue focuses on.