Spencer: It’s a marvelous thing to watch a series come into focus — to reach that eureka moment where you finally get what a creator is trying to say, where a series’ message finally clicks. Simon Spurrier and Jonas Goonface’s Godshaper 6 has been one of those moments for me, a finale that brings all the themes the series has been exploring together in a satisfying, yet completely unexpected fashion. END_OF_DOCUMENT_TOKEN_TO_BE_REPLACED

Our race, sexuality, or gender are usually major parts of our personal identities, but because of the prejudiced society we live in, they can also end up as impediments in life if we’re non-white, queer, or non-cis/non-male — essentially, if we don’t meet the status quo. In Simon Spurrier and Jonas Goonface’s Godshaper, being a shaper has always worked as a metaphor for all these “other” identities, which makes Ennay’s reaction to an offer of a god of his own — which would free him from the stigma of being a shaper — all the more interesting. END_OF_DOCUMENT_TOKEN_TO_BE_REPLACED

Godshaper weaves a tale of discrimination with gorgeous parallels to our current day within a new universe. Period. While parallels exist here between the “Dark Materials” series, the comic lives in its own plane, dealing with social issues in a novel, resonating way. While issue four does not break down any new walls in this series, the base-line for this comic is so consistent and lovely and revealing that I don’t even mind. END_OF_DOCUMENT_TOKEN_TO_BE_REPLACED 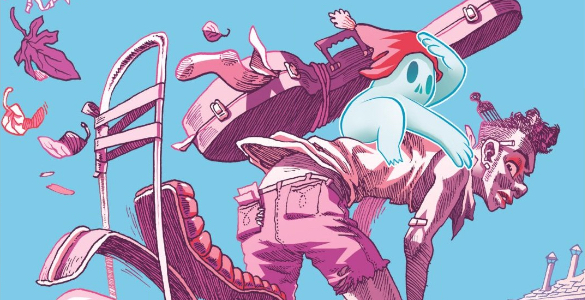 I recently read a Dear Prudence column featuring a letter from an atheist who still enjoyed going to church because of the traditions and social aspects. This probably seems almost blasphemous to those who look to religion as a path to salvation, but it turns out that there are many who look to religion to meet other needs entirely. Simon Spurrier and Jonas Goonface run with that idea in Godshaper 3, as they examine the role of organized religion in a world where everybody already has their own personal deity. END_OF_DOCUMENT_TOKEN_TO_BE_REPLACED

Drew: Creating compelling characters is hard. Simply conceiving of multi-dimensional, realistic, sympathetic characters is hard enough — driving many writers to make extensive biographical sketches before even attempting to include them in a story — but it’s even more complicated when you want to integrate those characters and their unique motives and traits into your world. For most narratives, the basics of characterization can be handled up-front, as the major players are introduced, but for ongoing serial narratives, introducing new characters often requires clunky exposition that slows the momentum of the story. With the Teenage Mutant Ninja Turtles microseries, Editor Bobby Curnow and crew have realized a clever work-around, offering a space to explore the motives of the characters without taking time away from the propulsive narrative going on in the main series. It’s a brilliant idea, and Fugitoid is an excellent proof-of-concept. END_OF_DOCUMENT_TOKEN_TO_BE_REPLACED