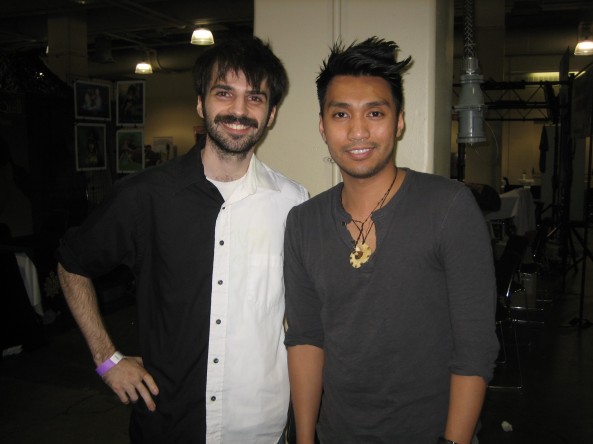 Francis Manapul was on fire at this weekend’s Boston Comic Con. After a full day of drawn-as-you-wait commissions, Francis was gracious enough to sit down for an interview — as he prepared a sketch for Saturday’s charity auction.

Check out Drew and Patrick’s review of the Flash 8 here!

Drew: With the new 52, the Flash seems to have hit the reset button a little harder than a lot of the other titles —

Francis: Oh, I don’t know about that. Anyway, sorry, go ahead.

Drew: Can you talk about where the decision to go to Barry’s “past” came from?

Francis: Well, essentially, we saw it as an opportunity for us to tell stories from — I guess — kind of the beginning. We’re five years later so it’s not really the start of things, but when you’re introducing an old character to new readers there tends to be a lot of history. We had to tread really carefully about giving nods to the past but also making sure that it’s new and fresh and understandable for new readers. That’s basically the main goal. Some books are radically different than their past incarnations but I think, at the end of the day, the Flash is still the same tone as it was before. It’s still the same character, but kind of just reinvisioned. It’s almost like if we were making a Flash movie.

Drew: Were you concerned at all about alienating continuity-philes or Wally West fans?

Francis: Oh yeah, absolutely. You always worry about that. It’s one of those things where you worry about it when you’re thinking about the grand scheme of things, but once you’re writing the story and you get into the story, some of that stuff kind of just goes away. You just become focused on telling the best story that you can. Now, whether there’s stuff in continutity that I can use and keep within the new mythos, I’ll use it, but if it’s something that hinders us from telling a good story, then we’ll change it.

Drew: Between the presence of Iris West and this treadmill Barry is using to travel through time, I get the sense that we can see into Barry’s future — that we know where he’s going. How are you approaching those expectations?

Francis: The best thing about knowing what people are expecting is when I change something, it seems shocking. You’re expecting one thing and what you get is the opposite. With the treadmill, I don’t think a lot of people saw it coming that the whole purpose for the treadmill was to create energy to power the city. That was the whole purpose of reintroducing it. It wasn’t me doing a cosmic treadmill it was us creating a treadmill that makes sense and is practical for the world to day. I mean, what would be more valuable to society: a treadmill that can change the past, or a treadmill that can actually benefit the present? That was kind of the idea.

Drew: You and Brian seem particularly engaged with your fanbase. Does that kind of awareness of your audience affect how your approach storytelling? Are you paying a lot of attention to what they’re saying, either positive or negative?

Francis: Not really. At the end of the day, we just tell the stories that we want to tell. Obviously, if we’re doing something extremely wrong — I don’t even know if we would change it, because we kind of set the course and that’s kind of where things are headed.

Drew: Your layouts are particularly innovative. To what degree are you thinking about that in the writing stage, and how much of that crops up as you’re working on the art?

Francis: It’s both. Sometimes, when we’re writing a script, they’ll just assume that I’ll do something so the script for a double-page will just be like, “Flash does this. Francis will do his thing.” That’s the script. So I’ll tackle the page and I just make it up as I go along. I think that’s the big advantage — and I think the reason I’m able to do that — is I’m also writing the book; I’m able to know what the subtext of the story is and know what we’re going for. Knowing what the subtext is allows me to do stuff that is metaphorical or representational of what I’m trying to say and not have to be so literal all the time. That’s why, with things like issue 4, I was able to make the layouts even more non-traditional, because I knew what Mob Rule’s story was, I knew what his motivations were. I was able to create layouts that enhanced not just the story, but enhanced the reading experience because the panels themselves tell the story, to help-out the story that’s being told within the panels.

Drew: When you’re writing, are you conceiving of it all at once — are you imagining how it’s going to look on the page?

Francis: It’s hard to say, because it’s really natural. I think visually. If I can’t think of it visually, I can’t write it. I see every issue like a movie in my head. A lot of times, before I even put pencil to paper, and we’re just talking about it, like when Brian and I are on the phone, I’ll be like “Oh man, I wanna do this scene where he does this, and this is what we’re going to do.” So it’s hard to separate the two. I don’t feel like there’s one process and then you start the other; it kind of just continues.

Drew: Do you ever feel like you could just hand a script over to another artist? Would your writing change at all?

Francis: The thing is, when we do a script, I do layouts. So if I were to hand it off to another artist they would have layouts to work from. Now obviously, I’m an artist as well, and I don’t know if I’d be a fan of that. I would want to have my input, but it would just be a suggestion. Again, I think visually. It’d be interesting to see what another artist’s take on our stories would be. But I’d probably only want to work with artists that I know and am aware of so I’d know what their tendencies are and could work to their strengths.

Drew: Well, that’s about all the questions I have, but I feel like I’ve got to ask one more for all of the Flash fans out there.

Francis: Sure man, go for it.

Drew: Can we expect to see Wally any time soon?

Francis: Come on. Are you serious? The honest truth is, I’m not allowed to use Wally West. That’s the basic truth. I’ve tried, I’ve tried to sneak him in there. I’ve tried to propose what I would do, but ultimately, I’m just not allowed to use him. The thing is, it kind of makes sense. I’ve been told that one of the big problems with introducing Wally West is that as soon as we introduce him, people are going to say, “when is he going to become the Flash?” So essentially, by introducing him, we’re showing Barry Allen the door. Unfortunately, that’s the problem with Introducing Wally West. I have some ideas for how I think I would do it, but all of that is a moot point because they don’t want us to use him.

Drew: And that’s the policy for the forseeable future?

Francis: Pretty much. I know everyone jokes around about it and everyone asks, but I can’t do anything about it; my hands are tied behind my back. They told me “use Barry Allen, and that’s it.” I wish I could say more. I wish there was a bigger scheme or a bigger story for what we’re going to do, but the honest truth is, they told us not to use him. It’s their character, it’s not mine.

Drew: Honestly, we love what you’re doing with Barry. I just wanted to tease you a little about that.

Francis: Well thanks, man. It’s crazy, because I grew up on Wally West. Obviously, there’s a part of me that wants to see him, but I also see how valid their point is. It doesn’t take a genius to realize that the moment you introduce him, people would be eager to see him back in the mantle of the Flash.

Drew: Well, seeing Iris, you get this tease that he’s out there, he exists.

Francis: Of course, yeah. Of course he exists somewhere, we just don’t know where. [laughs] But I think it still works. Maybe it’s better that way, that you can imagine and pretend where he is. Maybe it’s better left — rather than bringing him in and forcing it in a non-flattering way. I dunno. We’ll see. But right now, he’s a no go.