Scott: It’s a bad time to be Dick Grayson. He perhaps lost more than anyone in the Death of the Family, with Joker destroying Amusement Mile and undoing all of the hard work Dick put into Haly’s Circus. At the end of Nightwing 17, he finally found some comfort in the words of Damian Wayne, who was promptly killed in Batman Incorporated 8, leaving Dick with even greater grief. Even a man as level-headed and generally unfazed as Dick might start to question the fairness of these events- why he keeps getting punished when he hasn’t done anything wrong. But of course, when it rains, it pours, and Nightwing 18 only manages to torture Dick further with more terrible news.

The issue begins with a flashback to the end of Nightwing 17. Dick can’t get that conversation with Robin out of his head, and the frustration of Damian’s death sends him into a brief fit of rage. He meets with Sonia, who reinforces Damian’s message that Dick shouldn’t stop trusting people just because some bad things have happened. On his way home, Dick is intercepted by Batman, who leads him to an auction, where the Dealer is selling Dick’s father’s old circus costume. Dick bursts in and starts a fight, but the Dealer starts a fire, gasses the room and tries to leave Dick for dead. Unfortunately, the door is jammed, so Dick has to bust the Dealer and his goons out of there, leaving his father’s costume behind in the flames. Dick visits Damian’s grave, then he tries to open up to Sonia, who drops a bombshell: Tony Zucco is alive!

I wasn’t sure what to expect from this issue in terms of grief, but I thought writer Kyle Higgins handled that side of it pretty well. Damian meant so much to Dick, so his death is obviously hitting Dick hard, but I’m glad it didn’t turn into exaggerated display of high emotions. Dick has always been the type to internalize his pain, and this issue stayed true to that. The shift of emotions when Dick opens the video game he ordered to play with Damian, which leads him to throw his phone at the wall in a moment of pure grief-stricken frustration, was perfectly executed and incredible sad (although if he had just thrown the game instead of the phone, he could have saved himself some trouble).

If you really want your heart broken, go back and look at the last panel of Nightwing 17. For context, Dick spent that entire issue shielding his emotions, hating himself on the inside while assuring everyone around him that he was fine. He did this with nearly everyone he cares deeply about. Damian, after stopping Dick from doing something he would have regretted, was the first one to make Dick actually feel better about himself. There are a lot of people who care about Dick, but Damian truly understood him, and the smile on Dick’s face in that last panel is like a sigh of relief, because Dick knows he has someone who can make him feel better even at the worst of times. Now that that person is dead, where does that leave Dick? I knew this issue would focus on that relationship, and Dick’s coming to terms with Damian’s death, I’m just surprised by how much else it tried to tackle.

Dick’s raid on the Dealer’s auction was well done, but it felt more like standard issue Nightwing fare than like a reinforcement of a theme specific to this issue. Nightwing, like most superheroes, often chooses to save the lives of villains who wouldn’t do the same for him. But given Dick’s recent downward spiral, and the fact that he needed Damian to stop him from nearly killing a couple thugs in the last issue, this serves a mini turning point, or at least a reaffirmation of Dick’s character. Dick never was a killer, but thanks to Damian, he now realizes he never will be.

With all of the loss Dick has suffered recently, I was wondering how much time he would get to dwell on the past. Turns out, not very much. By reintroducing Tony Zucco into Dick’s life, Higgins has set up a manhunt that should dominate the near future of Nightwing. Dick mentions that he rarely visits his parents graves, but that doesn’t mean they aren’t constantly on his mind. Dick’s life serves a constant reminder of his past as a orphan, nowhere more notably than in his relationship with Sonia Branch, wherein Dick never fails to mention, albeit unfairly and usually unprompted, that her father killed his parents.

The art in this issue was sometimes shaky. The dialogue heavy first half featured some awkward looking panels, especially in the coffee shop scene with Dick and Sonia, where the faces were inconsistent and not quite right. But Juan Jose Ryp picked up steam during the action heavy second half. Dick’s fight with the Dealer looked awesome, and Ryp effectively delivers a superhero-stares-at-burning-buliding-from-roof-of-nearby-building moment.

So, Mikyzptlk, were you satisfied with how this issue handled the aftermath of Damian’s death? My only complaint might be that it was a little to Dick-centric, as even Dick’s visit to Damian’s grave seemed to be more about Dick than about Damian. It doesn’t appear there will be much focus on Damian in future issues either, what with Tony Zucco back in the picture. Speaking of which, will the lessons Dick has learned about himself all go out the window once he’s face to face with the man who killed his parents?

Mikyzptlk: Considering that this Requiem stuff has felt thrown into some of the Bat-titles, I’d say that Higgins does a good job of incorporating Damian’s recent tragedy along with the emotional fallout that remains from Death of the Family. Dick has had it incredibly tough as of late as you said Scott. Joker essentially destroyed his whole world by taking out the circus and I’d imagine that Damian’s death is affecting Dick almost as much as Bruce. He did fight alongside Damian as Batman and he helped him to grow into a character that we all could love. I would imagine that with the kind of loss Dick and Bruce have both faced (both presently and in the past), they would be able to confide in each other. Which is why I was so disappointed to see how cold Dick was to Bruce in this issue. 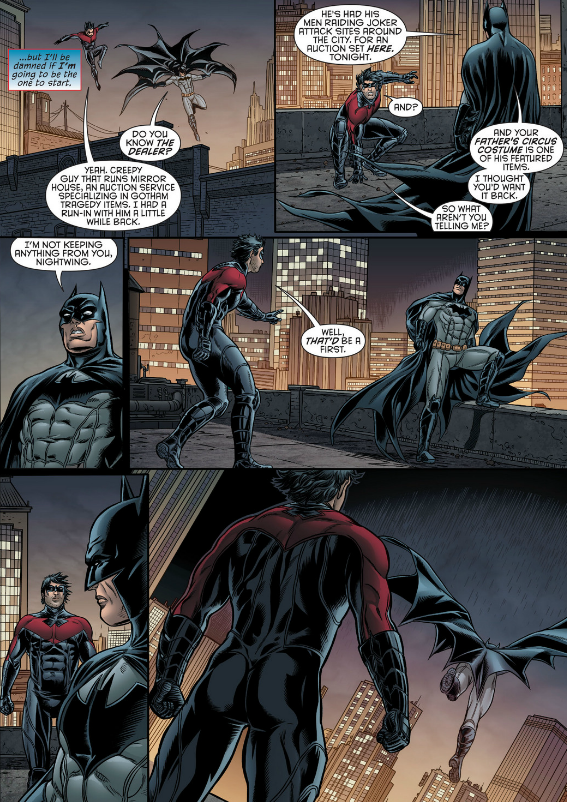 Damn, that is Mr. Freeze level cold right there. I get that Nightwing has just lost a lot, including his brother, but Batman has just lost his son. I completely understand that Dick would still be angry with Bruce over DotF and the loss of Damian, but I would’ve liked to have seen Dick cut him a little bit of slack especially because it is a loss that they both share. Conversely, I would have liked to have seen Bruce try to reach out to Dick a bit more, but we all know Bruce is about as good at that as he is at not drunk dialing Catwoman on those lonely Saturday nights. Please don’t read this as me being disappointed in the story, because I’m not. I’m disappointed that neither of these characters could find it in themselves to reach out to one another as the father and son that they essentially are. So, in that disappointment, I feel that Higgins succeeds quite nicely with his handling of these two characters. Ever since Dick graduated to Nightwing, they’ve had difficulty interacting with one another to the point that even when they aren’t fighting, there always seems to be a bit of tension boiling underneath the surface. It’s clear that Higgins understands their troubled history, and he plays it well here.

The surprise reveal that Tony Zucco is still alive is a welcome twist that I didn’t see coming. Scott, you bring up an excellent point about Nightwing having to remember that he isn’t a killer. I certainly hope that Nightwing has truly taken to heart the lesson he learned from Damian, but I’m sure Nightwing will indeed have a difficult time remember that whenever he eventually comes face to face with Zucco. Not only has Higgins given us an issue that touches upon the events of Batman Incorporated 8 and Death of the Family, but he’s set up what seems to be a very promising arc. I’m not sure how Nightwing is going to handle facing off against his parents killer, but I’m looking forward to finding out.