Drew: Origin stories are a fact of life for comic book fans. Love them or hate them, they’ve become an obligate part of superhero storytelling. Every movie franchise, every hard reset, every soft relaunch, needs to retell the origin story with a new spin (you know, to justify the retelling), folding new elements into those of previous iterations. The result is a strange, multi-generational chimera, cannibalized from every version of the story that’s come before. The results can range from beautiful to grotesque but the best manage to pay homage to the past while pointing a way forwards. Scott Snyder and Greg Capullo tackle a seminal moment of Batman’s history in Batman 23, perfectly balancing the admiration and innovation, building to a climax perfectly designed to excite Batman fans.

The issue opens as Bruce is attacked by the Red Hood Gang in his Park Row brownstone. In a hallucinatory sequence, we see Bruce’s rescue from his first tumble into the cave spliced into the attack, creating a strange sense of timelessness — a sense that is carried through Bruce’s slow escape to Wayne Manor. Snyder seems to be willfully playing with out expectations here, as each successive step brings us closer to Thomas’ study and the fateful moment when Bruce decides to become a bat. 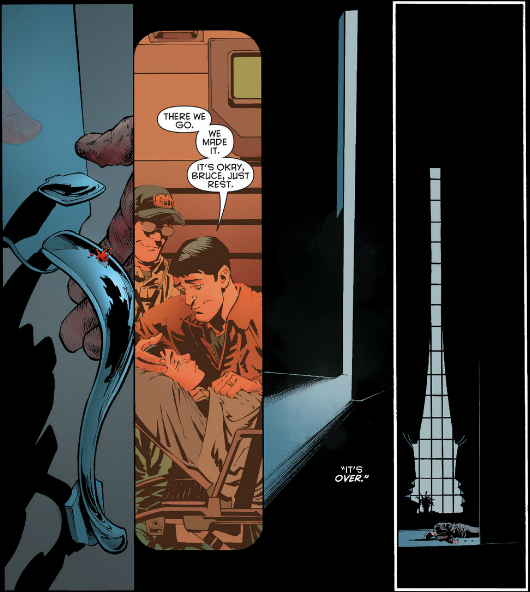 The scene finally coheres around the “present” of Bruce collapsing in the manor (brilliantly conveyed by FCO Plascencia’s subtle color work), taking us to the edge of our seats waiting for the other shoe to drop…and Snyder cuts away. When we return to Bruce, he’s already in recovery on Alfred’s operating table — something that comes after the pivotal “yes, father” scene in Year One. Actually, we never see that happen in Year One — we just kind of take it for granted that Alfred is there to patch Bruce up. This scene brilliantly corrects that oversight, giving Alfred a more personal investment in Bruce beyond blind loyalty. It’s an element that is almost always present in Batman stories, but I don’t think has ever been shown to quite such an effect in an origin.

As Bruce drifts away from that conversation, the confusion of space and time returns. He makes his way to the study, but this time with the 3D Prometheus mapping device from issue 21. Not content to simply allow a bat in the window, Bruce turns Thomas’ study into the Batcave, creating a moment so rich in foreshadowing and father issues that I couldn’t process them all before Bruce finally turned to see the bat perched on his father’s bust. Sensing the importance of that moment, Bruce lowers himself into the armchair, and delivers those fateful words from Detective Comics 33. It’s enough to get any Batman fan’s blood pumping (and I’ll admit to having actual shivers at this moment), but Snyder and Capullo take care to smash the mapping device, leaving only Bruce, the statue, and the bat.

It’s an incredibly powerful moment, made all the more exciting by Snyder’s circuitous route in getting there. Far from obligatory, Snyder manages to add more weight to the scene, defying our expectations in the most satisfying way possible.

It’s a personal moment for Bruce, but the story does shift away from him to catch up with Philip Kane and Edward Nygma. The scene is pretty boilerplate — Kane turns on Nygma for sending the Red Hood Gang for Bruce, but Nygma is characteristically a few steps ahead — but that doesn’t stop the artistic team from pulling out all of the stops. The warm oranges of the fire and the desolate blues of Wayne Manor are contrasted perfectly in Nygma’s signature color scheme of green and purple, lending the scene a garish, cartoony quality.

Bright colors and self-satisfied smirks might seem out of place in such a meditative issue, but it speaks to Snyder’s commitment to the post-modern take on the character. Don’t get me wrong — I don’t want to accuse Snyder of being Grant Morrison, but he wears his influences on his sleeve, and they clearly range from everything from Frank Miller to Bruce Timm.

Patrick, I loved the holy living hell out of this issue, but this might be one of those instances where I traded my objectivity in for some full-hearted Batman fandom. I know we both trust the Snyder-Capullo Batman baseline as pretty hight, but is this as seminal as I suspect it might be? Are you willing to accept this origin as your Batman origin going forward (or at least until the next one comes around)?

Patrick: Perfectly willing — yes. As you mention, it doesn’t so much contradict the letter or the spirit of what we’ve seen before, but it does take a broader view of the term ‘origin’ — and it does so without losing the psychological potency of the original. Drew already did a pretty good job of connecting this incident to Alfred’s decision to aid Bruce in all this crime fighting nonsense, but I was struck by how much Red Hood claims to have in common with Batman (without even knowing “Batman” yet). I’m getting ahead of myself.

Throughout Zero Year, we’re seeing Bruce as a sort of proto-Batman, and Red Hood as a sort of proto-Joker. Red Hood does the unthinkable and claims the death of Thomas and Martha Wayne as a transformative moment for him. I know there have been a couple sloppy attempts to weave the Joker in to that incident — most famously in Tim Burton’s Batman, which casts Joker as the gunman himself. That’s just a shitty coincidence: there’s no emotional honesty there. But I love the way Red Hood frames their death here:

Changed my life forever. Martha and Thomas Wayne. Scions of the city, do-gooders, titans. Gunned down by a nobody. Over nothing. For no reason. […] Stare into it and try to find meaning. You’ll go mad. All you can do is fear and survive. It’s the truth. […] We wear the red hood to court that wolf, rather than hide. Eat us, we say. Eat us all.

It’s a surprisingly understandable reaction to the crime in Gotham — a slightly more sophisticated “if you can’t beat ’em, join ’em.” Then we see Bruce literally reflected in the hood (as Scott pointed out last month). But Bruce’s saving grace? He’s spitting in the fucking face of that fear.

The idea that they would both be products of, not only the same city, but the same event is so compelling it kinda hurts. And it all happens without dumb coincidences — that whole “…by nobody. For nothing. For no reason” thing holds true. Red Hood justifies shooting both faces in the Wayne portrait with the toast “Here’s to symmetry.” What a beautiful way for Snyder to toast the observation that Batman and Joker have a common point of origin.

Drew mentioned how layering the Batcave over Thomas Wayne’s study makes for a loaded series of images, but it’s also remarkable just how beautiful it is. Because we already understand some of the story beats here, and because disorientation is part of the presentation, Snyder steps back, and lets Capullo do much of this storytelling visually. Capullo’s no slouch, and while Snyder may have prepackaged some emotionally fertile images, much of the awe these pages inspire comes from the execution. 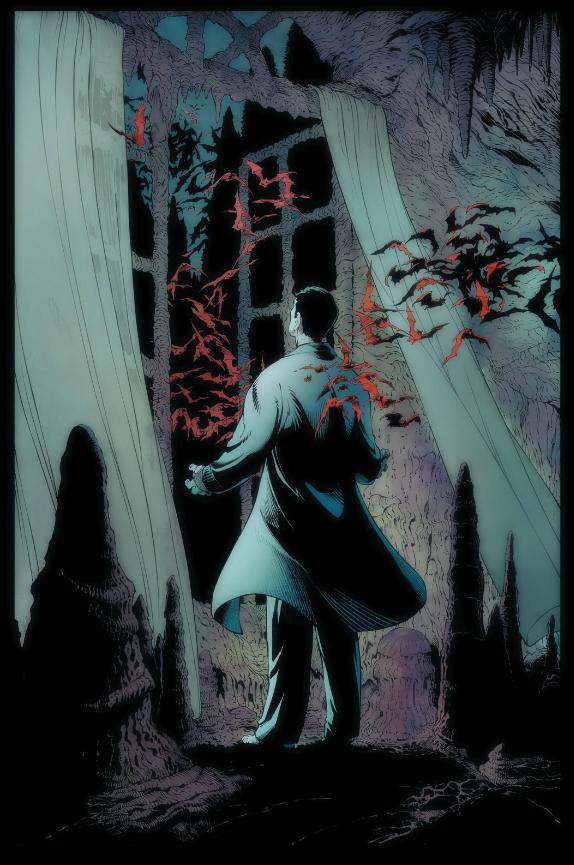 It’s no wonder Drew got chills. I could read pages upon pages of windows that look like they’re made of cave walls — just so long as the mapping device neglects to project anything over the curtains. That shit is poetic.