Today, Spencer and Scott are discussing The Flash 23.1: Grodd, originally released September 4th, 2013. This issue is part of DC’s Villain Month. Click here for our coverage of Villain Month.

Spencer: Francis Manapul and Brian Buccellato have put a lot of work into remaking Gorilla Grodd over the past couple of years. They’ve recreated Gorilla City and tied its existence—as well as Grodd’s ambitions—into the same source that powers the Flash. They’ve amplified Grodd’s powers and savagery. In many ways it’s worked wonders—Gorilla City has always been a beloved part of the Flash mythos, but now it also feels like it belongs in this world more than it ever has before—but despite all that, Grodd still came across as a bit of an one-dimensional character, obsessed with ruling and power and not a lot else. In The Flash 23.1: Grodd (what a mouthful!) Buccellato aims to change that by giving us a look into Grodd’s psyche and determining whether it’s destiny, evolution, or something else entirely that drives the gorilla. It’s surprisingly compelling.

Since the end of the Gorilla Invasion, Grodd’s repentant former-soldiers have been working with the government of the Gem Cities to help make up for the damage they caused, and are even on the cusp of joining the United Nations. Things are looking up, so, of course, Grodd has to reappear to ruin things. Freed from the Speed Force by the Crime Syndicate, Grodd returns claiming that the Flash is dead. He decimates the police force, his former soldiers, and even some B-List Rogues looking to get in on the action. Grodd evolved while trapped within the Speed Force, and he’s practically unstoppable. Soon he’s completely conquered the Gem Cities and is parading around with the heads of his enemies on pikes. It is literally everything Grodd has ever wanted, yet…it’s just not enough for him.

During his time in the Speed Force Grodd has been debating whether he’s driven by destiny or by evolution. Is he destined to inherit the light of the Speed Force and rule the world, or is this simply the endpoint of his adaptation and evolution? Grodd seems to drop these questions as soon as he’s released from his prison, instead focusing his attention on conquering the Gem Cities. Ultimately Grodd never does find an answer, but instead, he seemingly realizes that the answer doesn’t matter. Maybe it was destiny or maybe it was evolution that drove Grodd to conquer and rule, but in the end, he is no longer satisfied with what he’s accomplished. It’s a swerve to be sure, but it rings true, partially because of the intense soul searching Grodd’s been doing.

This twist ending succeeds in more ways than just being surprising, of course; it also helps to expand Grodd’s world and the kind of stories that can be told with the character. Grodd’s always been all about the conquering, but now that it bores him, what will he do next? I’ve got absolutely no idea, but I’m pretty excited to find out.

The expansion of Grodd’s world couldn’t have come at a better time, since the whole conquering bit was starting to feel a little old. This entire issue’s story was basically a retelling of the Gorilla Warfare storyline, only without the Flash there to save the day. Even some of the smaller details are uncannily similar: Solovar gets impaled again, some of the Rogues try to fight back again (though Piper doesn’t fare as well as Cold’s group), and some of the Rogues again try to ingratiate themselves to Grodd (and poor Chroma fares even worse than the Trickster). It’s a daring choice to make; it can be fun to pick out the similarities, and it’s a compelling argument for the evolution of Grodd as a character, but it also runs the risk of appearing a little silly or derivative of former storylines.

One of those repetitions that doesn’t quite work is Piper’s reappearance.

Piper hasn’t been seen since he attempted to take on the Rogues during their attack in The Flash 12, and unfortunately for Piper, he was taken out effortlessly both times. This scene really is a perplexing choice. I can assume that Piper appears to show at least some sort of hero fighting back against Grodd or to reintroduce Piper for a future story, but he just leaps out of nowhere and is taken out instantly and not seen again for the entire issue, and it’s been so long since we last saw him in the first place; it was more of a non sequitur than a fight, and it just came across as a really jarring moment. It also weakens Piper as a character; are we supposed to take him seriously after two humiliating defeats? He’s becoming a joke, and Piper’s a character with too much potential to be turned into a joke.

Still, despite a few problems here and there, this is a surprisingly well-done issue. It also manages to hit a deceptively difficult balance; it furthers plot points and revisits characters from the monthly Flash book, introduces some “new” Rogues into the mix, ties-into the main Forever Evil book without the connection feeling ham-fisted, and still somehow finds room to tell a compelling one-shot story about Gorilla Grodd! It’s too dark of an issue to call it fun—something I think we’ll be seeing a lot this month from DC—but I still enjoyed this issue a lot more than I expected to.

So Scott, what did you think of all these gorillas? Are you interested in Grodd’s newfound direction and introspection, or do you miss the old Grodd? Do you appreciate circling back to previous plot points, or does it feel like too much of a retread for you? Remember, you can’t get bored and hop off until you answer all the questions!

Scott: Boy, if only I could fly off and start anew anytime I get sick of my life. Who doesn’t want to pull a Grodd every now and then, am I right? But hey, we can’t all be hyper-intelligent, telepathic Gorilla Kings…

I am definitely relieved and excited about Grodd’s newfound direction at the end of the book. Despite offering a unique look into Grodd’s psyche, this issue mostly served to reinforce and amplify things we already knew about him. Turns out, he’s even more ruthless than I thought! Early in the issue, Grodd tells Solovar that his only responsibility is to the future of their race, but that quickly goes out the window once the gorillas start getting in the way of his real agenda. One of the most powerful and telling moments of the issue comes when Grodd shows just how far he’s willing to go to take down any and all who disagree with him. 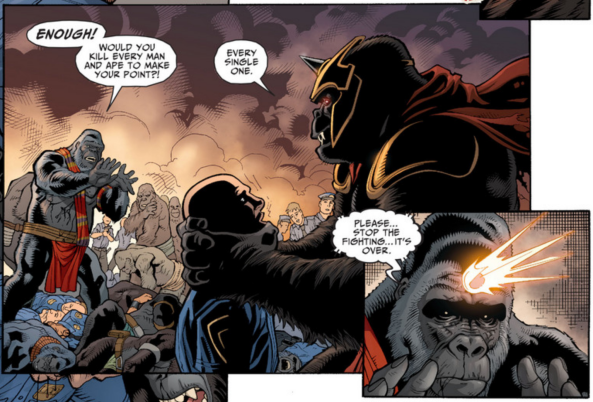 Although Grodd “wins” this fight and gets every man and ape to kneel before him, it must have been a blow to his psyche to realize no one is on his side. I can’t help but wonder if part of his reason for leaving was because he felt so completely alone in his ideology. Even if you have absolute power, I imagine it would be boring to garner zero enthusiasm for all your big ideas. Evil as he is, Grodd just wants someone to “get” him. Maybe that contributes to the cute little existential crisis he has as he flies away.

I still think Grodd will need to change even more go be able to carry his own stories. Spencer, I agree that some of the plot points felt familiar, which only reminded me that, just like before, I’m still not on Grodd’s side. That’s not to say that can’t change, but in order to be a compelling title character, Grodd will need to display a little more humanity (or peaceful ape-manity?) This issue was clearly presented from Grodd’s POV, but I found myself latching onto anyone who might be able to get in his way, just because I dislike him so much. I suppose it’s possible to tell a story where you root against the main character the whole time, but it seems risky.

I have to say I’m impressed with this issue. Buccellato manages to tell a thoroughly entertaining story that draws from The Flash universe without using it as a crutch. Plus, I’m always up for a good ape-brawl, and Chris Batista did an excellent job stepping in as penciller and delivering fun and stylish art. Now I’m just hoping Grodd finds something interesting to do, though anything that’s fun for Grodd probably isn’t for anyone else.