Spencer: I’ve gone to a lot of shows by myself over the last couple of years, but it’s rare that I’m ever lonely. I am not a bold or outgoing person, but there’s something about knowing that the majority of the people in that building all love the same band I do that makes it easier to reach out and make new friends. That’s what I love about fan culture, how shared love of a show or book or band can bring strangers together, be it in person or online. Unfortunately, there’s a dark side to fan culture, be it pretentious elitists who believe their way of loving a piece of media is the only “right” way or gatekeepers who want to push out anybody they don’t want in their fandom, often resorting to violent or illegal means. The Wicked + The Divine 6 marks the beginning of a new storyline, one which Kieron Gillen and Jamie McKelvie already seem eager on using to explore the darker side of fan culture. See, it turns out that not all of the Pantheon’s fans are as loyal or level-headed as our Laura…

In the month since we last saw her, Laura has been restless and depressed, haunted by visions of Luci’s death and unable to replicate her trick with the cigarette. That all changes when she’s contacted by the god Inanna, who actually met (and came to admire) Laura at a Pantheon fan-convention known as “Ragnarok” in his pre-deity form. Inanna’s been investigating the gunmen who attacked Luci back in issue one, and he’s come to the conclusion that they weren’t zealots, but fans.

Laura responds to this news by breaking her media silence and offering herself up as a guest-speaker, a move I find interesting for its ambiguity alone. Is Laura simply tired of being alone and isolated, emboldened by her positive encounter with Inanna, or is she hoping to infiltrate fan communities to help Inanna find more answers?

Ragnarok is a clear stand-in for Comic-Con and other fan conventions, and Inanna’s observation in the first panel is one I know many can relate to. For most, conventions are a wonderful experience, but they can turn ugly fast — for example, you don’t have to search long to find articles criticizing cosplayers for “ruining” cons or articles about cosplayers being sexually harassed, and that’s just the tip of the iceberg.

In Laura’s case, the speaker on this panel uses his supposed knowledge of the Pantheon to spread his prejudices against young people. It reminds me a lot of the anti-youth culture bias discussed in this week’s Ms. Marvel, but beyond that, he’s elevating himself to a position of authority so he can get off on pushing around others, dictating who “deserves” a Pantheon and who doesn’t as if he has any say in the matter. It creates a hostile environment at what should be a welcoming event, and this is all too similar to the kind of “gatekeepers” you can find in almost any fandom today.

Fortunately, Laura seems to be learning the same lesson many of us have: just because you enjoy something doesn’t mean you have to like or agree with its fans. Sometimes you won’t be able to find a place within a fandom at first, but that shouldn’t dissuade you from enjoying what you love or from fighting to create a place for yourself. In many ways, it’s a lesson Inanna’s already learned.

Inanna’s attempts to find kinship with other Pantheon fans failed — it was only when he learned to let go of his fear that he gained the confidence he was looking for, and that was something only he could do. Maybe this is a reminder for us not to invest ourselves too wholly in things or the culture that pops up around them, but instead take charge of our own problems?

Regardless, this issue doesn’t paint the most flattering picture of fan culture, but considering all the controversy surrounding it recently (including the infamous “Gamergate”), it’s a discussion that needs to be had no matter how unflattering it may become. Of course, this is only the first issue of this arc, and with Laura set to make a slew of con appearances in the near future, Gillen and McKelvie have plenty of time to expand and clarify their view on the subject.

In the meantime, they use the first half of the issue to paint a clearer picture of Laura.

Gillen and McKelvie stick to a pretty strict grid in The Wicked + The Divine, making any time they subvert that layout all the more powerful. As subtle as it is, that second panel is one of my favorite examples, with Laura’s bursting into the gutter depicting her breaking free from reality and taking refuge in her thoughts. 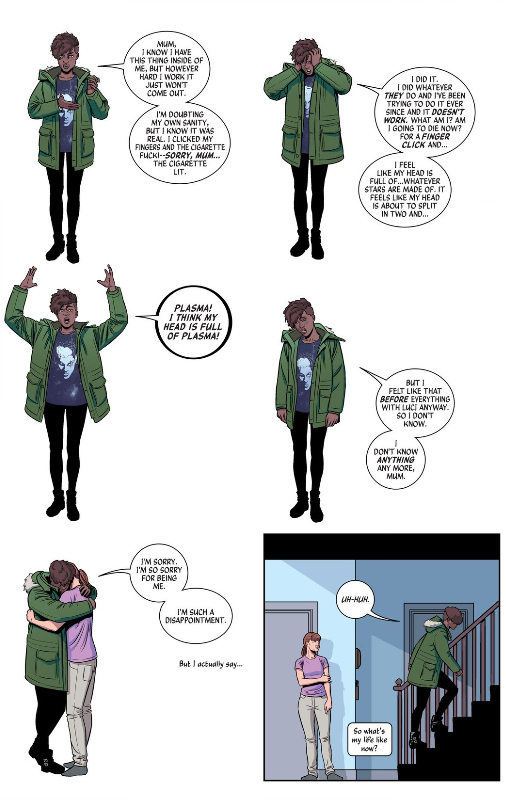 Here Gillen gives us a clear, straightforward look into Laura’s thoughts, magnificently complimented by McKelvie’s acting, but in typical teenage fashion, Laura can’t find it in her to say any of it out loud. The next page shows us Laura’s room, and again, it’s painfully normal. All of this is here to better characterize Laura, but also to remind us how “normal” she is in comparison to the Pantheon — in fact, her room is still covered in Pantheon posters, and she’s even still lusting after Baal despite meeting him and thinking he may be a murderer. Whatever her connection to the Pantheon may be, Laura is still a “fan” first and foremost, and I can only imagine that will be an important distinction to remember going forward.

Drew, I think this is the first time we’ve gotten to discuss this series together, so I’m eager to hear your thoughts. Have you been digging it as much as I have? Also: do you still have a landline? I often forget we do.

Drew: Gosh, what a geezer. Even my parents don’t have a landline any more.

In all seriousness, though, I think you’ve tapped into a lot of elements that make this series — and particularly this issue — interesting. I’m particularly intrigued by your assessment of fan culture, and wonder if you might agree that this series might actually be about aging out of that culture.

People getting too old for their youth-oriented music scene or having more important things to worry about than trading theories about their favorite tv show is nothing new, but Gillen and McKelvie have found a very earnest approach to the issue. I hope it’s not too controversial to suggest that fan culture tends to be more fervent in younger folks, which I think is largely rooted in their quest for an identity. It wasn’t so long ago that I was confusing “what someone likes” with “what someone is like”, but that’s a way of life in high school. Maybe your tastes weren’t as demonstrative as, say, goth, but virtually everyone’s sense of “cool” is at least in part influenced by the music they  listen to. For me, the “ugly” side of fan culture also includes the pressure to dress or act a certain way — self imposed social strictures arbitrarily tied to the art you enjoy.

That quest for identity has always been a big part of this series — when we first meet Laura, she’s cosplaying — but Gillen and McKelvie amplify its effects here. Notice the language Innana uses when describing becoming a god [emphasis mine]:

It seems pretty clear that he’s talking about sexuality. Before he was given a death-sentence, Innana was afraid to be himself, but realizing that life short (his life in particular), he felt liberated. It’s fascinating to me that he boils it down to the freedom of a shortened life and not just divinity on its own — perhaps this freedom comes to the rest of us when we face our own morality. Indeed, perhaps it doesn’t need to be so imminent as two years away, but perhaps just more realistic to us than the famed “immortality” we feel as teens.

In fact, I think that eschewing of social strictures is the coming-of-age message buried in this series. Laura was a superfan of sorts, but is now about as distant from that fan culture as you can get. She’s disinterested — dare I say disgusted? — when talking with other fans, and seems to have her posters up more because she hasn’t taken them down than because she cares to keep having them up. The realities of the pantheon have jaded her — her time as a superfan is over. More importantly, her return to the culture teased here sets her up as an outsider.

Full disclosure: I tend to be pretty wary of “fan culture,” particularly the histrionics tied up in clothing styles and manner of speech that we associate with certain fandoms. I know that may sound ironic for someone who runs a comic book blog in his free time — and I can’t promise that my position isn’t at least somewhat hypocritical under close scrutiny — but it should hopefully explain why I liken emerging from that fan culture to the freedom of coming out of the closet, or why I see Laura’s own distance from her fandom as a sign of her maturation. Mileage will vary on that reading, and I look forward to a spirited debate in the comments.

Whatever the stance on fan culture, Gillen and McKelvie have crafted a fascinating, gorgeous series. The investigation of Luci’s would-be assassins was one of my favorite elements of the first arc, and I’m thrilled that we’ll be returning to it in the second. I can’t wait.