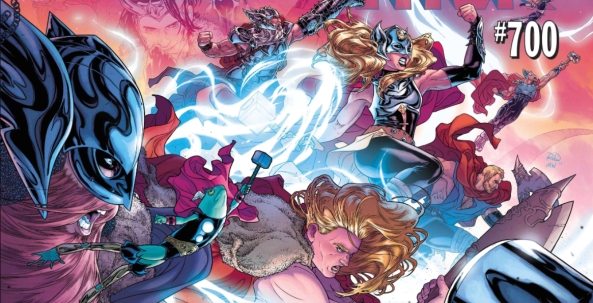 Taylor: Midway through the extra large, special 700th issue of Mighty Thor, Karnilla, Queen of the Norns, asks which ingredient is the most essential in the makeup of a Thor. It’s a good question, and one that writer Jason Aaron has been exploring ever since he took over the reigns of Thor some 60 issues ago. While Aaron has posed various answers to this question multiple times, he’s never come outright and revealed to readers what exactly makes a Thor Thor. That is, he’s never done that until now. Using the 700th issue as his podium, Aaron waxes poetic on the nature of Thor, presenting us with not so much a new Thor narrative, but a grand tapestry that relishes in pondering what Thor has been, currently is, and what it will always be.

Issue 700 is 50 pages long and juggles multiple narratives that aren’t so much connected by a singular story, but by a singular question: what makes a Thor? Aaron explores this idea by following the exploits of the Odinson as he tries to save the Norns from Malekith’s army, Jane Foster as she battles She-Hulk, Volstagg in his attempts to resist the call of the War-Thor, Thor both young and old, and perhaps most surprisingly, Throg — the Frog of Thunder.

This last character is such a surprise (and frankly so very goofy) that his story can’t help but charm its way into being a highlight of the issue. Once a human, Throg one day came across a chipped off piece of Mjolnir and was found worthy to wield its powers — just on a smaller scale. 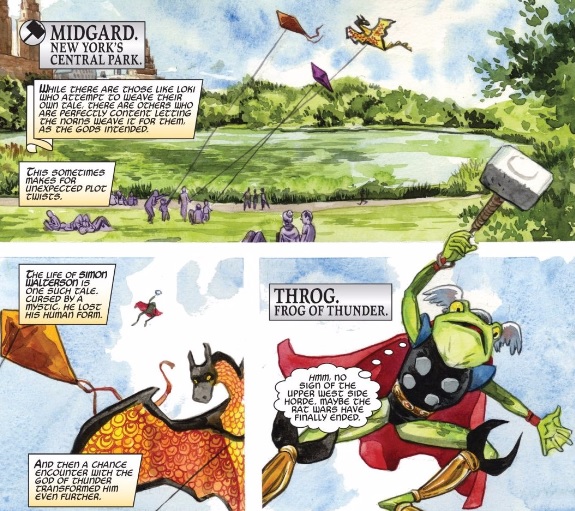 He now spends his days fighting evil rats and forcing murderers to confess their evil deeds with constant rain clouds. In this issue, Throg also finds himself saving Jane Foster just as she is about to de-Thor (and be crushed by rubble) after her battle with She-Hulk. Throg’s actions, both big and small, reveal one thing that makes a Thor worthy in Aaron’s eyes: all Thors, whether they be Frog or God, strive to help others and work tirelessly to protect their realms. Throg’s small stature exemplifies this characteristic, given that he doesn’t let his amphibious body prevent him from keeping Central Park safe or rescuing Jane Foster when she needs it most.

Elsewhere in the issue, Aaron is more straightforward in answering his own question. In looking at the history of Thor, Aaron takes us all the way back to when Thor had yet to pick up his mighty hammer — to a time when Thor was just a young pup. As Aaron details adventures from the Odinson’s youth, Karnilla continues to pontificate upon what makes someone a Thor. It is here that she finally reveals the “ingredient” she believes is most essential to anyone who bares the Thor moniker.

As Aaron weaves this grand tapestry that defines who and what Thor is, he’s assisted by a plethora of artists who bring his story in an amazing array of styles. While merits and praises can be heaped upon any of these artists, I find it hard to not, once again, praise Russell Dauterman for his artistic vision. One has only to glimpse the opening pages of this issue to understand why his artwork had become synonymous with Aaron’s quality run on Thor.

When you look at Dauterman’s artwork, you get the idea that he’s playing at a different game than other comic book artists. Here, Thor talks with Karnilla about the upcoming attack on the Nornkeep at the roots of the Worldtree. As they walk, they discuss the fates and the twine foretells all beings fates. Dauterman enlivens this exposition by framing the panels with a swirling  border made up of the same fates being discussed. Their billowing and starry cloaks hint at universal nature of their reach and the strings with which they dictate someone’s story make up the gutters of the very story being told to us on the page. Not only is this beautiful, but it conveys the sense that readers themselves are entwined in the fates’ story in just the same way the Odinson and other characters on these pages are. Characteristically amazing work from Dauterman here.

Patrick, this is huge issue and I had the chance to only talk about a few of things that really enjoyed about it. What about you? What are your favorite parts? I took the cheap way out and once again praised Dauterman’s artwork, but there’s a ton of other artwork to like in this issue. What was your favorite? Lastly, what other ways is Thor defined for us in the issue?

Patrick: Interestingly, I think we need to look outside Thor(s) to recognize one of the must crucial things that defines the god of thunder. The question, as provided by the text, isn’t exactly “what makes Thor?” but “what makes a Thor story?” And Aaron gives us an answer almost immediately after articulating that question: all Thor stories are epic.

But big deal, right? Epic is a word that has been so warped by popular usage that a kid flipping a water bottle at a school talent show receives the honorific. Aaron and his artistic cohort set out to establish a more specific definition here, as the concentric rings of story ripple out into the wider world around Thor. What makes the character may just be the supporting cast. We do spend an awful lot of time with Loki murdering frost giants for his father or the Jennifer Walters Hulk or even Ego the Living Planet. Aaron is able to demonstrate the breadth of Thor’s impact on the Marvel Universe by selecting characters from vastly different corners of that Universe to play a part in this story. The three I mentioned above are from Thor’s own mythology, the boots-on-the-ground Avenger’s style stories, and the cosmic books respectively. What makes a Thor story is the complete obliteration of the boundaries between fantasy and science fiction, between the divine and the mundane.

Hell, Jane Foster is the perfect embodiment of this idea. One minute she is a cancer patient, weakened by the very drugs that are fighting her illness, and the next a near-invincible god of thunder. We don’t spend a ton of time lingering on the vulnerability of Jane, but I always like seeing her in her civilian clothes — it just grounds her so much.

I can’t be 100% sure whose drawing this is, but it looks like an Daniel Acuña joint to me — complete with his skill for understated acting built right into his character’s postures. The doctor’s tentative step forward, the arm folded behind his back, even the slightly tilted head communicate a kind of optimistic, familiar weariness. Jane’s legs, by comparison, are together, feet awkwardly overlapping. Her shoulders are crooked, half up in a crutch-related shrug and half down in weathered slump. There’s nothing “happening” in this panel — certainly not in the ‘epic’ sense — but Acuña communicates so much about the character’s routine before Aaron smashes it to bits with a Hulk brawl.

That is an example of Aaron and company exploring the granular side of the scale equation, but this story issue also swings wide. I already mentioned Ego the Living Planet, but it’s sort of staggering to consider just how many pieces of universe-altering mythology are built into his mini-story. The set-up is that Odinson has already defeated Galactus with Gorr’s Godkiller blade, thus transforming Galactus into some kind of Planet Butcher. These mythological shifts come fast, and wordy titles are changing every couple panels. It’s a bit of absurdism for sure, a battle between a living planet and a planet killer ending in the birth of a whole new kind of killer-planet-god-eater… thing. 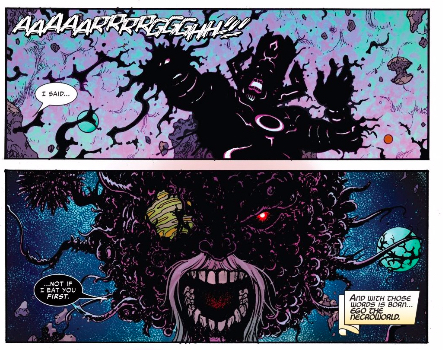 Not only does Ego take on the coloring of Galactus (and, by extension, Goor), but his speech balloons also take on that God Butcher coloring (though, not the Asgardian font). This may be drama that’s simply too high and too big to fully comprehend: we’re never going to be as sympathetic to this relationship as were were to even the one-panel exchange between Jane and her doctor. But, y’know, the fact that we get both in a matter of pages illustrates what’s so jaw-dropping about Thor.

Oh and speaking of jaw dropping: is it time to talk about that prophecy? 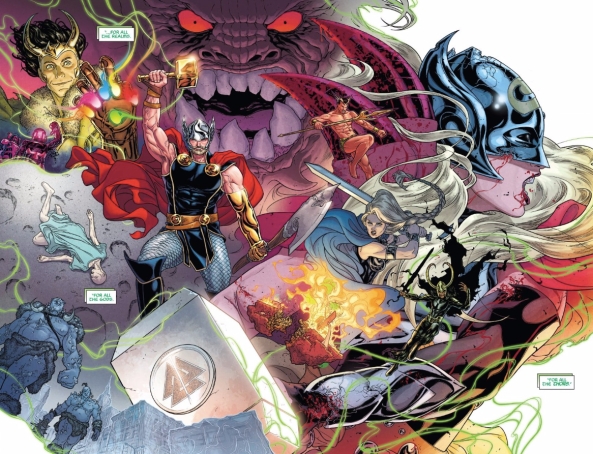 This is another one of those dynamite spreads from Dauterman that proves he’s one of the best in the business. A lot of these images would be intriguing on their own (Jane in a hospital gown unconscious on the moon!), but the way it plays off the teases elsewhere in the book is downright genius. We saw Thanos hanging out with Hela earlier and Loki looking for something to prove, so the missing piece of Loki wielding the Infinity Gauntlet excites me to no end. I’m not really one for speculation, but this kind of image is enough to make me sing a different tune.