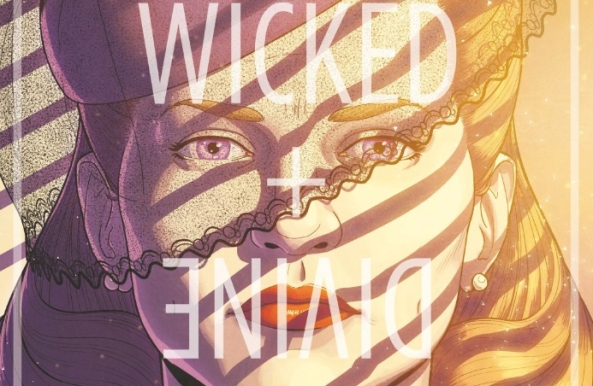 One of the things I appreciate the most about Kieron Gillen and Jamie McKelvie’s collaborations is the way they handle big twists and reveals. Gillen and McKelvie rarely trade in big showy twists (and when they do — such as in the “I Am Ananke” moment — they tend to raise more questions than they answer); instead, major pieces of information are revealed with such subtlety that one could almost miss them, and usually have plenty of evidence pointing their way long before the theories are finally confirmed, rewarding loyal, eagle-eyed readers. The Wicked + The Divine 38 clarifies several major pieces of information this way, furthering the plot, deepening its characters, and taking advantage of this arc’s unique structure in the process.

Throughout the “Mothering Invention” storyline Gillen and McKelvie have been using the flashback sequences, which take up the first half of each issue, to flesh out Ananke’s plans and motives. WicDiv 38‘s flashbacks are interesting because the actual events of the flashback don’t reveal much; instead it’s the tiny details Ananke and Minerva let slip throughout this sequence that prove most enlightening. First, McKelvie and Gillen show the birth of “our” Minerva, proving that the Minerva readers saw throughout most of this series was always an act. The other reveal is even more subtle, hidden away in a simple line of dialogue. Pay particular attention to the third panel here: 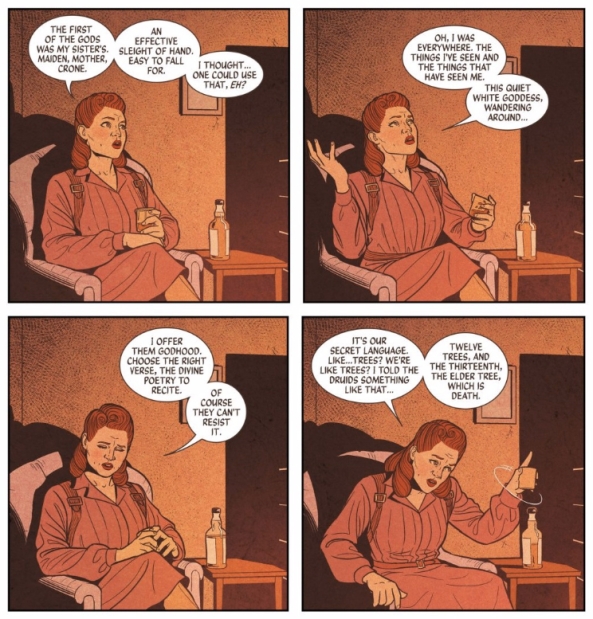 Turns out none of the Pantheon were destined to become Gods; Ananke can offer anyone Godhood, and hand-picks her victims to serve as pawns in her game. I’ve suspected something similar to this for a while now, but that’s not exactly a revelatory theory; we learned long ago that Ananke specifically offered Cameron/Nergal/Baphomet Godhood at the request of the Morrigan, indicating even then that Ananke was ultimately in control of the process. With that in mind, this is less of a reveal and more of a confirmation of something most readers were probably already putting together themselves.

What makes this confirmation especially compelling, though, is that Laura comes to the same conclusion at the same time, but from an entirely different angle.

Laura hasn’t necessarily realized that Ananke hand-picks the Pantheon, but she has figured out that she’s not truly Persephone, that Godhood never truly belonged to them, was never the destiny that she and the rest of the Pantheon for so long thought it was. That revelation leads to Laura taking herself off the playing field completely, removing herself from Ananke’s game — it’s a reveal that doesn’t just inform the readers, but which has major reverberations on the plot and characters.

WicDiv 38 also uses its multiple time periods to clarify another confusing subject — the maiden, mother, crone. In the flashback Ananke mentions it as an early inspiration, her first tool. The present day sequences never mention those words specifically, but they do show us The Morrigan’s own triple-formed deity in a totally new context. 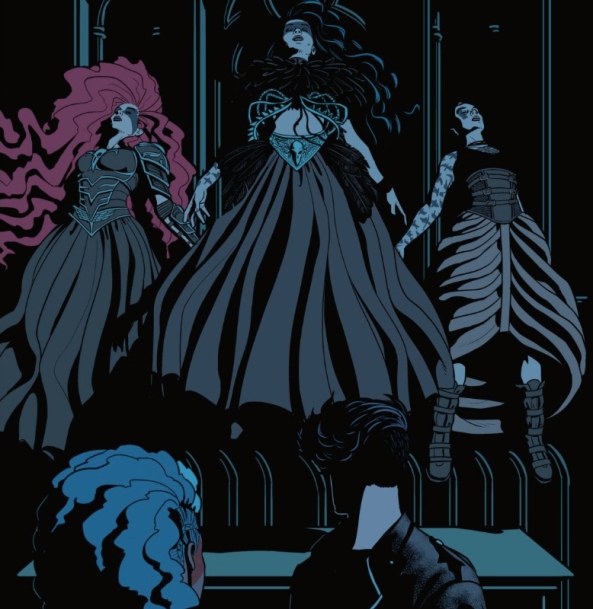 This is the first time we’ve seen all three of her personas co-exist in the same physical space simultaneously, which creates precedence for Minerva and Ananke doing the same. Maybe The Morrigan’s triple-formed god isn’t a maiden, mother, crone, but it does give readers a tangible example that allows us to better understand what Ananke’s been doing all these years, and how she’s been doing it.

WicDiv 38 is a tremendous example of what I love about Gillen and McKelvie’s work; how they use formal inventiveness, not just for show, but to reveal new facets of their stories, worlds, and characters. Now I can’t only wait to see what’s become of Laura, but how the creative team chooses to reveal this information to their readers.