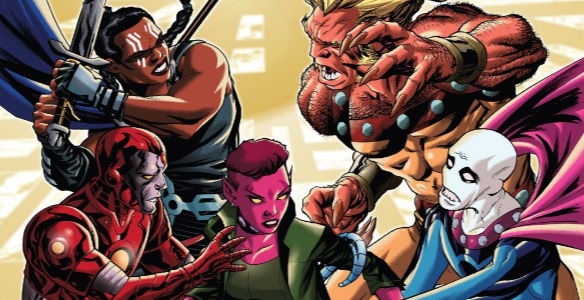 Exiles has been extremely lucky to have a regular artist as talented as Javier Rodriguez, but the series is just as lucky to have found a guest artist like Rod Reis, one who’s just as talented, even if his style is entirely different. I could probably spend a month just gushing about Reis’ work throughout Exiles 6 and 7, but today I want to specifically talk about his character designs and how they inform so much about each character’s role and personality without a single word.

The most obvious example is Wolvie. Reis didn’t design the character, of course, but I’m intrigued by the ways his take on the character differs from Rodriguez’s. Rodriguez treats Wolvie as if he came from the pages of one of Skottie Young’s comics, but Reis draws Wolvie more like a cartoon character — right down the posture and tell-tale lip, he looks as if he’s been ripped straight out of a Chuck Jones short.

The idea of Wolvie being a living cartoon changes a lot about how I view his powers, and the visual motif Reis chooses for him — the shakier lines, the brighter, flatter colors — helps him stand out from the rest of the cast every time he appears. His design itself is an explanation of his origin and abilities that never needs a word of exposition.

I can say the same for this incarnation of T’Challa, King. He too always stands apart from all other characters on the page, but in the exact opposite way as Wolvie.

Reis practically introduces him as a mirage, with the bottom of his legs rippling in the heat and being obscured by red dust. It’s as if what we see in T’Challa is simply too good, too grand to be believed. Throughout the rest of the issue Reis continues to make him a regal, statuesque, larger-than-life figure — his posture, and the contrast, not only in his black-and-white costume, but in the backgrounds Reis chooses to place him before, all work to set him apart from the rest of the cast, this time showing him standing above them as a more majestic and dignified figure. Again, it highlights not only his royal position, but how foreign the character is to this setting without a single word being spoken.

Perhaps most interesting is the issue’s villain, “Pastor” Xavier. 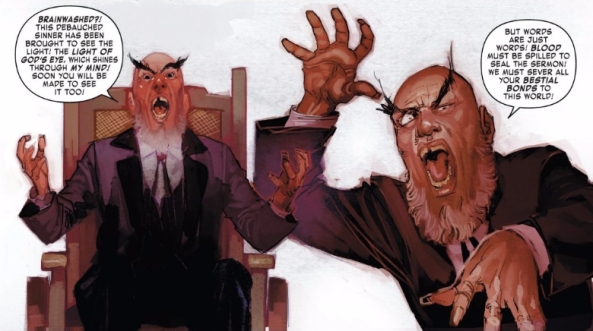 The design itself is brilliant — clearly, recognizibly Charles Xavier, yet with period appropriate touches like the beard — but what intrigues me is his madness. Reis draws him as clearly deranged from the start, and the more evil and unhinged he becomes throughout the issue, the more his body seems to physically come apart at the seams, until by the time he dies he barely seems human at all.

He’s almost an abstract painting here, more madness than man, and it’s a brilliant depiction on Reis’ behalf, making sure that he receives no redemption in death. His outsides are as twisted as his insides.

Writer Saladin Ahmed, of course, deserves as much credit as possible for coming up with the scenarios behind these characters and for the twisty, tragic plot of this issue, but he’s also been quite blessed to work with artists who can make his ideas evident so easily, clearly, and distinctly. Their combined efforts have made Exiles a delight even in its darkest moments.