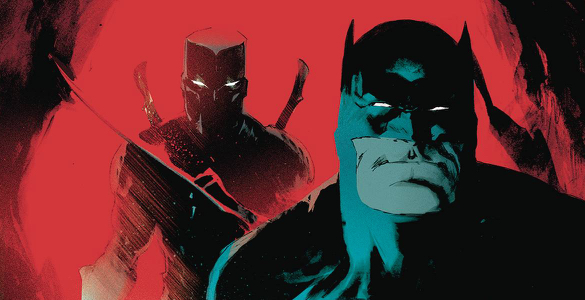 Alfred fills a peculiar role in Batman’s world. He’s Bruce’s father figure, but also his servant; he’s the Dark Knight’s staunchest ally, but also his greatest critic. The one thing these disparate titles have in common is that they cast Alfred as a supporting player — indeed, it’s often easy to forget that Alfred Pennyworth is a man with his own life and history, not just someone who cleans up after Batman. That’s something Scott Snyder and Rafael Albuquerque are out to change in “The First Ally,” a storyline that dives into Alfred’s past and uses his history with his father to shine a new light on his relationship with Bruce. END_OF_DOCUMENT_TOKEN_TO_BE_REPLACED

Mark: It’s easy to take post-Crisis Alfred Pennyworth for granted: faithful household butler to Thomas and Martha Wayne who takes young Master Bruce under his wing as a surrogate father, guiding Bruce through the toughest years of his life. Alfred is Batman’s Batman, the person responsible for keeping the trains running on time, and the last man standing in Bruce’s corner when everyone else is against him. This characterization of Alfred is so ingrained in our consciousness thanks to the movies, animated television shows, video games, and, of course, comic books that have released post-Crisis, propelling the Bat Family’s cultural cache into a larger multimedia stratosphere than they’ve ever experienced before. But like most comic books characters, the Alfred we now know is not the Alfred that always existed. END_OF_DOCUMENT_TOKEN_TO_BE_REPLACED

Michael: A sympathetic villain is one whose immoral actions are motivated by noble intentions. Rather than being an outright force of evil, the sympathetic villain tends to have an ultimate goal — the ends of which justify the means. As a mass audience we tend to like our villains to be at least somewhat sympathetic — allowing us to latch on to some human emotion and understand them. You know who also likes to sympathize with his villains? Batman. END_OF_DOCUMENT_TOKEN_TO_BE_REPLACED

Michael: One of the tenets of Batman story is perception: the difference of worldview between Batman, his allies, and his villains. There’s the more popular battling ideologies of vigilantism vs traditional legitimate law enforcement or Joker’s anarchy vs Batman’s order, but All-Star Batman’s battle of ideologies is based on the age-old question of “is man inherently good or inherently evil?” END_OF_DOCUMENT_TOKEN_TO_BE_REPLACED