There’s a letter in the back of the final issue of Star Wars Poe Dameron that questions the disparity between the character we see in the comics and the character we see in Episode VIII. “In The Last Jedi, Poe’s actions show that he is brash and headstrong. During the movie he becomes a great leader.” And that’s true: in deed and in name, he is the Best Pilot in the Galaxy. Writer Charles Soule answers this letter with the following observation: “[Poe] hadn’t really failed to that point.” In The Force Awakens and Star Wars Poe: Dameron, he is still a singular hero. Star Wars: Poe Dameron 31 strips away the narrative myth of the Chosen One, forcing victory by ensemble, by circumstance, and by hope. END_OF_DOCUMENT_TOKEN_TO_BE_REPLACED

This arc in Star Wars Poe Dameron has been all about telling war stories: who does it, and why they do it. The answers thus far have been pretty straightforward. Poe tells Rey and Finn what he was up to during The Force Awakens so they can bond over their differing perspectives on a shared experience. It brings them closer together. And Artoo and Beebee honor their fallen droid brothers by recounting the serial number of every robot lost in the attack on Starkiller Base. These are noble war stories, and that’s weirdly consistent with the tone of the original trilogy. For as much as Star Wars was about Vietnam, Lucas perhaps didn’t have the historical perspective to capture the tone or cadence of war stories from that conflict. With Poe Dameron 29, writer Charles Soule taps into a sense of hopeless, confusion and pointlessness, rounding out his list of reasons to tell war stories with one of the hardest explanation out there: because they happened. END_OF_DOCUMENT_TOKEN_TO_BE_REPLACED 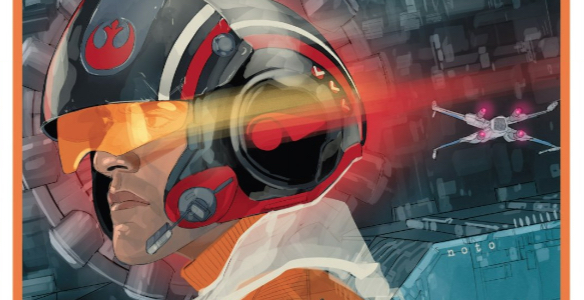 The fact that The Last Jedi picks up almost immediately where The Force Awakens left off leaves the Poe Dameron comic in a bit of a tight spot — the Star Wars comics have been mining the fertile ground between A New Hope and The Empire Strikes Back for decades now, but Poe Dameron doesn’t have that kind of space to work in, instead leaving Charles Soule and Angel Unzueta only tiny blank gaps of backstory to fill in. We here at Retcon Punch have been a bit frustrated by this over the past few issues, generally preferring the sweet, chemistry-filled framing device (a conversation between Poe, Rey, and Finn) to the actual stories it’s being used to tell. Poe Dameron 28, though, finds success by approaching these vignettes from a new angle, building a mystery around who actually is telling the story. END_OF_DOCUMENT_TOKEN_TO_BE_REPLACED

It’s easy to overlook throughout the Force Awakens and the Last Jedi, but Poe Dameron and Rey (does she have a last?) have spent virtually no time together by the time the latter film ends. That’s kind of odd when you think about how Poe, Rey, and Finn are touted as the next iteration of Luke, Leia, and Han. This being the state of things, however, it makes sense the three of them would have a lot to catch up on. Still, the last issue of “Story Time with Poe and Friends” wasn’t all that great despite it’s apparent need. So does the second issue featuring the same premise fare any better?

END_OF_DOCUMENT_TOKEN_TO_BE_REPLACED

Michael: Marvel’s Star Wars line of comics were launched on the idea that what happens between the movies behind the scenes are stories worth telling. Surprisingly, many of these stories have been deep, creative chapters in the lives of the characters we know and love, building upon their respective character philosophies. Not every aspect of these characters’ lives shares that amount of depth or insight, however. We spend a lot of our lives sitting around, not doing anything consequential. Unfortunately, the same is true for the heroes of Star Wars: Poe Dameron 26. END_OF_DOCUMENT_TOKEN_TO_BE_REPLACED