I think it’s fair to say that Coda is set in a particularly fantastical world. Beyond the trappings of magical beings and beasts, the characters themselves recognize that they’re in a kind of mythical world that almost fetishizes heroic virtues of bravery and self-sacrifice. Which makes the cowardly pragmatism of our protagonist a distinguishing characteristic. He’s not an idealist willing to die in the battle against evil — he’s just a guy who wants to settle down for a quiet life with his wife somewhere. In pulling away from heroism, Hum forces us to reexamine the assumptions we have about what it means to be a hero, and what it means to not be one. It’s a subject Simon Spurrier and Matías Bergara have been playing with since the first issue, but one that comes to the fore in issue 6, as Hum argues his position with Serka. END_OF_DOCUMENT_TOKEN_TO_BE_REPLACED 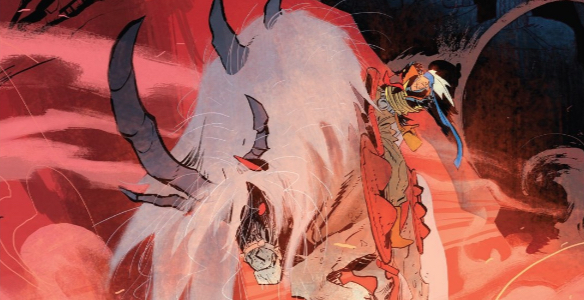 There’s a scene in Coda 1 where our protagonist hesitates to smell the wine he’s just been handed — he knows his host too well to trust them. It’s a revealing moment that also cleverly sets up a spiked wine gag a few pages later, driving home the point that nobody in this world can be trusted, least of all the characters we know. And it’s a point Simon Spurrier and Matías Bergara reemphasize towards the start of this issue, revealing their glowing wizard’s tower to be little more than a dank cave. The protagonist’s senses may be as difficult to fool as ever, but now we have to know not to trust our own eyes. And yet, the rest of the issue lulls us into putting our guards down, allowing us to believe we’ve found a refuge from the violence and deceit of the outside world. Which makes it all the more shocking when we learn all of those assumptions were bad, and that there really is no honesty left in this world. END_OF_DOCUMENT_TOKEN_TO_BE_REPLACED 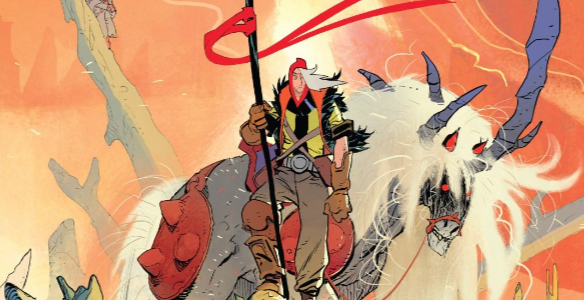 There’s little point in being nice to people unless the act of being kind itself brings you happiness. Rude people are not unhappy — not categorically, anyway — because they don’t care that they’re rude, and there’s an undeniable freedom in not caring. Having a conscience is arguably a bug as well as a feature, since it’s easier to achieve your goals if you don’t care about the people you hurt in your pursuit of them.

In Simon Spurrier and Matias Bergara’s Coda 1, former bard Hum is determined to rescue his wife from a clan of savage orc-like creatures at the cost of everything and everyone else; as the issue closes he’s willing to potentially sacrifice the population of an entire city if it gets him one step closer to her. But it’s clear that Hum’s selfishness can’t last, and Coda is poised to be a series about one man in a terrible situation learning to put others above himself. END_OF_DOCUMENT_TOKEN_TO_BE_REPLACED

I think we can all agree that cannibals are bad. Right? They feast on the flesh of human beings, their survival requires murder of innocent people — that’s pretty cut and dried. But there’s a second sickness that’s infested the town of Willow, Florida, and it’s proving just as deadly. Issue 8 of Cannibal focuses on those infected with affection for a cannibal. Symptoms include: viewing some people as “garbage people,” poor judgement, and prolonged cases of severe, obvious dishonesty. END_OF_DOCUMENT_TOKEN_TO_BE_REPLACED

This sentence has five words. Here are five more words. Five-word sentences are fine. But several together become monotonous. Listen to what is happening. The writing is getting boring. The sound of it drones. It’s like a stuck record. The ear demands some variety. Now listen. I vary the sentence length, and I create music. Music. The writing sings. It has a pleasant rhythm, a lilt, a harmony. I use short sentences. And I use sentences of medium length. And sometimes, when I am certain the reader is rested, I will engage him with a sentence of considerable length, a sentence that burns with energy and builds with all the impetus of a crescendo, the roll of the drums, the crash of the cymbals–sounds that say listen to this, it is important.

Pacing is the silent artistry of every medium, the kind of essential element that you only ever notice when it’s either poorly or remarkably well done. As such, pacing is not the kind of thing we always get to talk about around here — beyond the fact that the bulk are paced competently, comics pacing usually takes several pages to really sink in, so is a difficult point to illustrate in a short essay. But then there are comics that do it so well, they almost demand that effort. Cannibal 7 is one of those comics. END_OF_DOCUMENT_TOKEN_TO_BE_REPLACED

Look, there are a lot of comics out there. Too many. We can never hope to have in-depth conversations about all of them. But, we sure can round up some of the more noteworthy titles we didn’t get around to from the week. Today, we discuss Cannibal 6, Extremity 4, Injection 13, and Outcast 28. Also, we discussed Faith 12 on Thursday and will be discussing Star Wars: Darth Vader 1 and Paper Girls 15 on Tuesday, so check back for those! As always, this article contains SPOILERS. END_OF_DOCUMENT_TOKEN_TO_BE_REPLACED

Drew: I’m a bit of a sucker for a good twist, which is at least a part of why I love Cannibal so much. I was absolutely tickled by the twist at the end of issue 3 — a twist that was quickly outdone with the much larger one at the end of issue 4. If issue 3 was a proof-of-concept for the notion that anyone in town could be a cannibal, issue 4 demonstrated just how devastating one of those reveals could be. Issue 5 continues the pattern, revealing yet another cannibal in our cast, but shifts the reveal forward a couple pages, reminding us that this series is more than just a sequence of jaw-dropping surprises. END_OF_DOCUMENT_TOKEN_TO_BE_REPLACED

Look, there are a lot of comics out there. Too many. We can never hope to have in-depth conversations about all of them. But, we sure can round up some of the more noteworthy titles we didn’t get around to from the week. Today, we discuss Autumnlands: Tooth and Claw 14, Cannibal 4, Faith 7 and Jem and the Holograms 22. We’ll be discussing The Wicked + The Divine 25 on Tuesday and Saga 41 on Wednesday, so come back for those! As always, this article contains SPOILERS.

END_OF_DOCUMENT_TOKEN_TO_BE_REPLACED

Drew: My wife loves the Scream movies. So much, in fact, that we winced through both overwritten seasons (and feature-length Halloween special) of the MTV series. From the start, the franchise has celebrated its formulaicness, forcing its heroine (and the audience) to suspect each character in kind before ultimately revealing the killer to be the one we least suspected. In stretching that formula to 10- and 14-episode seasons, we’re forced to confront the paradox of knowing the least-likely person is most likely the killer (therefore making them no longer the least-likely), such that the reveal is somehow still a surprise. It’s basic murder mystery stuff, but the series luxuriates in the time between the first murder and the ultimate unmasking of the killer. Cannibal‘s premise is ripe for a similar twist on the murder mystery formula, blowing it up to include the entire town of Willow, but with the added twist that we have absolutely no idea how many killers are out there. END_OF_DOCUMENT_TOKEN_TO_BE_REPLACED