Today, Drew and Shelby are discussing the Green Lantern 13, originally released October 3rd, 2012. This issue is part of the Rise of the Third Army crossover event. Click here for complete Third Army coverage.

Drew: Who does a fugitive turn to for help? It’s a question we’ve seen a million times, as characters keep getting wrongly accused and keep needing just one chance to clear their names. It’s a compelling story, but it isn’t exactly the most relatable reason to have a character reach out to someone. With Green Lantern 13, Geoff Johns avoids this issue by recasting the question as the much more relatable “who do you tell when something big happens in your life?” The result is a story that keeps the focus tight on Simon Baz, even as the action continues to balloon.

The issue opens in the White House, of all places, as President Obama calls the Justice League to bring in Simon. Meanwhile, Simon’s ring rejiggers itself, delivering a muddled message from Hal and Sinestro before flying him back to Dearborn to connect with his sister. At home, Simon sees his family suffering the repercussions of his alleged terrorist attack. Simon asks his sister for help to clear his name — she has access to files that might reveal who owned the van with the bomb — and she agrees to meet him later that day. When he shows up for the meeting, however, Simon finds a very angry Justice League. Meanwhile, the Guardians’ third army is growing, and is now coming for Simon.

The main story beats are fairly familiar (Johns’ cinematic writing style adds to this effect), but the charm of this issue lies in Simon’s utterly understandable reactions to the strange events in his life. This starts as his ring “recalibrates,” reviewing his memories in pointed vignettes. The first is of Simon’s fateful drag race with his brother-in-law, but the second is of a much smaller moment, given only the context of being of the place where Simon and Sira used to “hide after school.”

In focusing on how Simon and Sira cope with their difficulties, Johns erases any fears that focusing on a Muslim family in the years after 9/11 might become exploitative. This story is about the characters and their relationships, not whatever horrible things might have been said to them at school. We got a glimpse of that in the zero, but by eschewing it here, Johns avoids overusing those moments.

The real centerpiece of this issue is the conversation between Simon and Sira. Sira generally trusts her brother, but she’s upset that he was secretly stealing cars rather than telling her he wasn’t making ends meet. Their conversation shifts rapidly from frustration to reservation to curiosity to genuine affection — that is, it feels exactly like a conversation two siblings might have in this situation, which makes her acquiescence to help all the more believable. That scene ends with her considering her phone, and I’m not sure if we’re meant to think that she may have turned Simon in.

Of course, I don’t think I could really talk about this issue without mentioning the Obama cameo. When he appeared in Amazing Spider-Man 583, I remember thinking that it was such a cheap cash-in, but it doesn’t bother me at all here. Part of it might be that it’s perfectly natural — the president is just doing presidential stuff — but I think a bigger part is that there was exactly no buzz about this leading up to this issue. Much like Simon’s family history, in keeping this info out of the press materials, DC has mitigated any suspicions of exploitation. Doug Mahnke could have drawn any guy in a suit, but the fact that he drew Obama adds a fun sense of verisimilitude (though he is saying things like “Have you notified the Justice League?”).

Speaking of Mahnke, his art really shines in this issue. He sells every moment of Simon and Sira’s conversation, as well as delivering some incredible action beats. My favorite moment, though, has to be the closing image of the Justice League.

It’s probably the least dynamic image of the Justice League I’ve ever seen — it looks like it was composed by a Sears portraitist — but their mostly static postures serve to emphasize their place of power. This isn’t a big, exciting action sequence; this is a group of incredibly assured people in absolute control of a situation.

This was an enjoyable — if a bit too brief — issue, one that seems surprisingly removed from the whole rise of the third army thing. Shelby, you cut your comics teeth on massive Green Lantern crossovers — do you see the time this issue spent away from the main action a distraction, or a necessity? I still don’t really know what to expect.

Shelby: I definitely see it as a necessity, especially since Johns needs to establish a new character. If we’re going to care at all about Simon in the sure-to-be huge events in the upcoming months, we need this time now to really get to know him. That being said, I wasn’t one hundred percent sold on this issue. Mahnke’s art was a big reason why. I just didn’t get any emotional connection from the characters. That brooding, stoic, posed look that serves so well for the Justice League reveal? I see that all throughout the issue; I actually thought the conversation between Simon and Sira to be the most wooden. 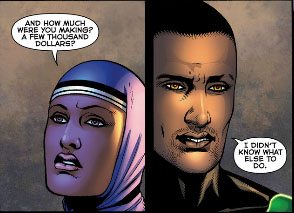 There’s just no expression there, they seem so vacant. This should be a very emotionally charged moment, and we just get a slightly furrowed brow and dead eyes.

I did like the sequence with the Third Army recruiter. Those things are damned scary; I think it’s the stringy mouth and the buggy, lidless eyes. 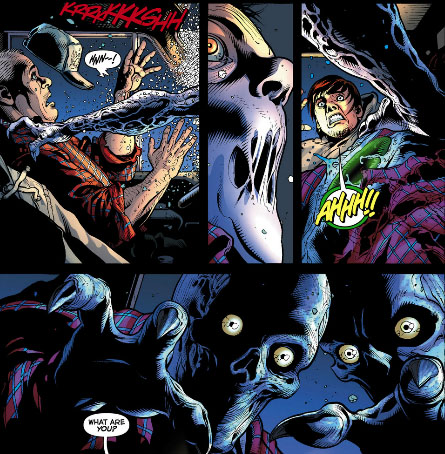 Johns just gives us a quick little reminder of that whole giant universe-ending war that’s brewing in space without elbowing in on the character development. That, and the garbled little message from Hal and Sinestro is all we get of the off-world stuff, and I think that’s ok. Simon is an intriguing enough character that I don’t mind fleshing him out, and I think that our connection to the characters is what makes Johns’ stories so rewarding in the end. I am looking forward to seeing what more the Guardians are plotting and where exactly Hal and Sinestro have ended up, and what’s the deal with the glitches in Simon’s ring, but for now I’m glad to take the time to get to know the newest member of the Corps.