Patrick: One of my least favorite criticisms of serialized fiction is that a story “didn’t go anywhere.” We have an expectation that the journey we’re on with the characters is somehow part of an investment that pays off in a meaningful way as events progress. We literally use that term “pay off,” as though the entertainment itself in a cost-benefit proposition. I resent the idea that we can’t enjoy a single issue on its own merits, and instead comfort ourselves with the idea that one volume seeded something that will feel significant later. Robin Rises Alpha 1 closes out the Damian’s Resurrection story by finally giving readers a glimpse of what it means to have a superpowered Wayne behind Robin’s mask. It’s an issue frustratingly short on content, repeating themes, scenes and pages from elsewhere in Batman and Robin, all but guaranteeing that the pay-off here is a retread of the past, rather than boldly striking out into the future of the character.

Regular readers of Batman and Robin will recognize these first 10 pages because it’s almost as though Andy Kubert is working from the exact same script from the end of Batman and Robin 37. Batman and friends tumble through the Boom Tube, sarcophagus in-tow, and Bruce enacts the same strange resurrection ritual with the Omega shard. I’m still unclear about the moment that he screams “don’t make me choose” — as though the shard grants him the ability to undo any death (or possibly… pair of deaths?) from his life — but the fact that the moment is repeated here in such spectacular detail gives me pause. Kubert gives the moment everything he’s got, presenting those two icono-traumatic events from Bruce’s life with empowering little twists. 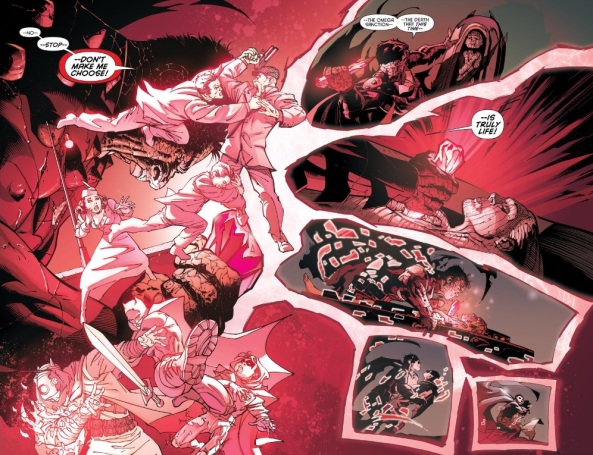 There’s an awful lot happening here — not only is the creative team retelling this part of the story beat-for-beat as it was presented a week ago, but they’re also drawing parallels between the most formative moment in the platonic Batman’s life and Damian’s death at the hands of The Heretic. Batman Incorporated artist Chris Burnham has said in interviews that he considers Damian to be “as dead as Thomas and Martha Wayne,” but this might be the first time the story itself makes that connection so explicit. I don’t know that that connection holds nearly as much weight as Pete Tomasi and Andy Kubert seem to insist that it does. For one thing, Thomas and Martha being gunned down in the alley behind the Monarch Theatre is one of the most emblematic images in popular culture, transcending both comic fandom and this specific moment in history. I suppose I may be speaking prematurely, and someday Damian impaled on Heretic’s sword will rival pearls bouncing off the pavement, but for right now, this comparison rings false.

Tomasi and Kubert close out the issue with another image that will be familiar to modern fans of Damian – the final page from Batman and Robin 8, with a few important changes. 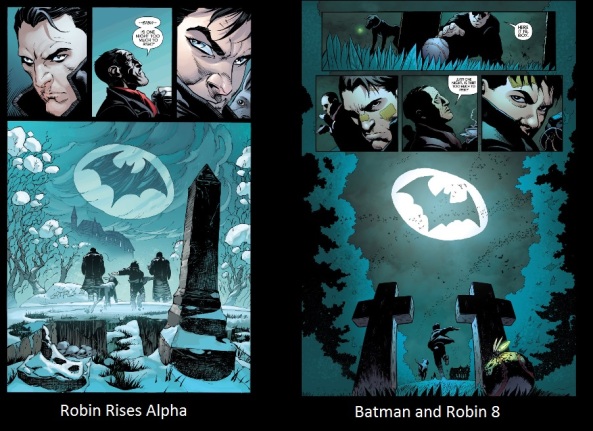 Again, this page is meant to draw the parallels between the headstones of Thomas and Martha Wayne and those of Damian and Talia. I do sorta like that the lopsided composition of the bottom panel of Kubert’s page makes that comparison a little more awkward, as if to suggest that this story, with its tween-super-ninjas and omega-fueled resurrections, has to limp towards emotional catharsis, rather than the sprint run by the Waynes’ murder.

I know that’s a lot of harping on connective tissue, but I think I’d be a little less critical of it if there was any substance anywhere else in the issue. Everything else can be reduced to a silly punch-em-up, with very little to articulate even the most obvious moments of wonder. Damian has superpowers for crying out loud, but his new feats of strength and endurance are rote and emotionally detached — he picks up a car, he takes a punch like a pro, even tossing the giant penny reads more like a entry on the list of Cool Stuff Damian Can Do and less like meaningful action on his part.

None of this is aided by the issue’s villain, Kalibak, who is basically the boss of this level — stronger attacks and a few more HP, but nothing that can’t be solved with a stronger punch! Also, what’s up with the Batfamily packing heat? 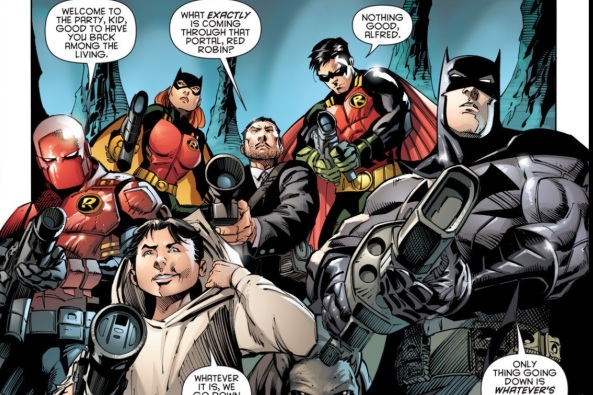 I don’t know, Spencer, I’m pretty down on this issue, which bums me out. I want champion these kinds of celebrations, but there’s just so little to grab onto here. The road that lead to Damian’s resurrection has been a long one, but I’m starting to question if the destination was ever worth it. Or, y’know, I would, if I didn’t believe that journey was always worth taking. Which I did. Maybe that’s why this pay-off doesn’t satisfy me the way I want it to — I’ve never felt like I was investing in something that needed to pay-off in the first place, just enjoying an honest story.

Spencer: In many ways I don’t think we’ve quite reached our destination yet, Patrick — Damian is back, but we’ve seen very little of what that means for the character or the rest of Batman and Robin‘s cast. Some of my favorite moments from this issue are the brief glimpses we get of where things might go next — such as the effect Talia’s death, and Bruce’s passing over her in favor of resurrecting Damian instead, has on Damian — but those are ultimately not what this issue is about. Robin Rises Alpha is an epilogue to a story that had already reached its emotional climax, meaning there’s nothing left to show except Damian’s brutal battle with Kalibak, and even that doesn’t work quite as well as it should.

For starters, as Patrick already somewhat pointed out, there’s very little personality to the threat Kalibak poses. I mentioned back when we talked about Batman and Robin 33 that Kalibak’s relationship with his father Darkseid could be a compelling contrast to Damian and Bruce’s, but that parallel never goes anywhere, essentially resigning Kalibak to the role of Damian’s punching bag. The fact that solicitations months ago ruined the surprise of Damian’s new powers also diminishes this issue’s impact to me; Tomasi focuses much of the action around just the sheer strangeness of Damian’s new abilities, but they came as no surprise to much of the readership, making the reveal and subsequent fight lose some of its impact. Tomasi may have been better off exploring why Damian has these abilities or showing him pushing their limits, but I can blame this more on the nature of solicts than any failing of Tomasi’s — had Damian’s powers come as a surprise the whole fight would have worked much better for me, and hopefully that’s how things played out for less-connected readers.

Truthfully though, in many other ways the focus of this issue is still strange. Why spend so many pages retreading a scene we just read in last week’s Batman and Robin 37? Why devote the bulk of the issue to a fight that ultimately feels a little meaningless? The real physical climax (Batman vs. Darkseid) and emotional climax (Damian’s resurrection and reunion with Bruce) of this storyline both came in Batman and Robin 37, leaving any attempt to further those plots in Robin Rises Alpha feeling pointless.

As an epilogue, it would have made more sense for this issue to focus on Damian’s reaction to being resurrected. As it is, Robin Rises Alpha rushes through a lot of those moments; I love getting to see Damian reunited with Alfred and his animals (or even seeing Bat-Cow “square off” against Kalibak), but they’re only brief moments that could have much more of an impact if they had more space to breathe. At the end of the fight with Kalibak the Bat-Family retires to the mansion for a celebration, and considering that some of Batman and Robin‘s most memorable issues have been sweet character stuff, I feel like focusing on that celebration instead of the fight with Kalibak would have been a much more natural and interesting route to take.

It’s frustrating to make that statement because I know that, as a critic, it’s my job to evaluate the issue that I’m given, not the issue I wanted to read, but when there’s as little to discuss as there is with Robin Rises Alpha, it’s hard for the mind not to wander. Actually, while both Patrick and I criticized the decision to recreate entire pages from Batman and Robin 37, those early pages ended up being the part of this issue that I thought about the most, if only to examine the differences between how the two issues approach them.

Batman and Robin 37, for example, was a climax, so Tomasi and Gleason focused on Bruce’s actions and Damian’s resurrection and nothing else. We never even see Cyborg — who has only one line of dialogue and is off-screen when he delivers it — and aren’t aware of the malfunctioning Boom Tube at all, and indeed, addressing either of those matters would have detracted from what was so important about that scene. Robin Rises Alpha is more concerned with opening the avenue for Kalibak’s arrival in the Batcave, and thus Tomasi and Kubert cut back and forth between Bruce’s ritual and Cyborg’s trouble closing the portal.

Seeing Kubert’s rendition of the Hellbat armor also makes me more grateful for how slick and cool it looked under Gleason’s pen, but that may just be my personal preference for one artist over the other. If there’s one area where Kubert absolutely excels in this issue, it’s with his depiction of Kalibak.

Kubert’s Kalibak is massive, lumbering, slobbering, practically feral, establishing him as a reckless, dangerous, and ruthless presence for the Bat-Family to take on, and the most successful moments of the battle land due to the energy Kubert’s style lends them.

So Robin Rises Alpha may be a bit of an anticlimax to a storyline that, otherwise, I thoroughly enjoyed, but I do think that the issue at least sticks its ending. 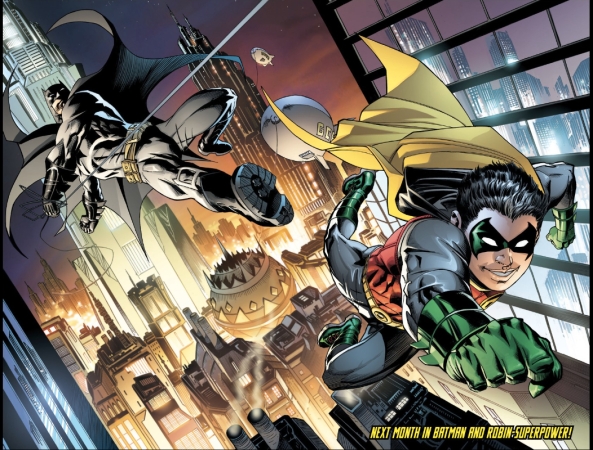 For me, this splash is the “pay off” — getting to see Batman and Robin together in action once again was what this storyline was all about, and as far as I’m concerned, finally reaching that point makes just about everything we’ve endured leading up to it — all the highs and the lows of the past several years of Batman and Robin — absolutely worth it.