by Patrick Ehlers and Mark Mitchell

Patrick: Throughout Scott Snyder and Greg Capullo’s run on Batman, the creative team valued invention over archeology. The character of Batman has been around for so long that deconstruction of the character is practically in his DNA, and while Snyder and Capullo found ways to riff on Batman’s history, their stories were always new. New threats, new allies, new secret identity. With Metal, the latest DC event, Snyder and Capullo turn inward, to explore, refine, and recontextualize the mythology and iconography that is already part of their multiverse. There’s a premium on re-arranging existing pieces into an entirely new whole.

This idea is artfully played out — in its entirety — during the cold opening sequence. We join the Justice League four-fifths of the way through some adventure that landed them in Mongul’s gladiatorial arena. Each member of the League is outfitted with armor that uniquely mutes their superpowers, and Snyder’s careful to show his work, detailing the mechanics of how each one works. For his part, Capullo leans into the graphic element of each piece of power-dampening armor.

In this moment, it’s almost a game of Recognize the Symbols. You can’t help but play — and win — because the first is maybe the most iconic visual in all of superherodom: Superman’s don’t-call-it-an-S emblem. And while Capullo’s visual cues suggests this S is business as usual, Snyder has Mongul clarify that it is made of “the dust of a few thousand crushed red suns.” That’s two pieces of DC mythology crammed together to make something new. As we move down the line to Flash’s boots and Wonder Woman’s armor, each piece is a recognizable part of the character’s design, twisted into something more sinister by means already in place in the DC universe (i.e., the Dominators and an elder Gorgon).

Those are all cool little twists, but all are ultimately pretty grounded – hardly a thesis statement in miniature. But as the fight progresses, Batman realizes that the robots they are fighting each contain a button inside their mouths bearing the symbols of the heroes. Push the button, gain the ability to pilot the robot. That’s getting really goofy really fast, and Batman’s friends all hesitate halfway through. The phase of Batman’s plan that requires them all to get eaten makes Wonder Woman respond with a delightfully panicked “–WAITWHAT?” But the weird stuff is only getting started. The heroes each take control of one of the robots, but only realize their true advantage when the robots join together, Voltron-style.

BAM – there’s the punchline. All seven the heroes, mixed together and re-presented in a way that makes them something new and powerful. Is it silly? Is it also awesome? I think I’ll let Cyborg’s “Booyah!” answer both of those questions for me.

To my tastes, those nine pages are this issue at its strongest. Snyder and Capullo are so singularly focused on remixing existing images and concepts and just having fun with the results. The rest of the issue is decidedly less fun, as the Justice League returns to Earth and start to investigate the giant metal mountain that appears in the middle of Gotham City. Kendra Saunders (AKA Lady Blackhawk, AKA Hawkgirl) appears on the scene with a mighty info-dump in tow. Between Gotham and her magical island in the South Pacific, Blackhawk Island, Kendra spins a yarn using some of the fundamental building blocks of the DCU as her toys. Nth Metal, the mutliverse, even the magical nature of Blackhawk Island steam from well-established mythology. Snyder makes a point of showing his work on that one:

“See?” Snyder seems to say, “It already exists.” Snyder’s going out of his way to prove that he didn’t make up this phenomenon. I’m used to seeing Snyder do this, but usually with real world information – he’s sort of the king of laying out some obscure or largely misunderstood fact about the world and using that to justify his narrative. The difference now is that the obscure facts are coming from comic history.

And who better to invoke when exploring comic history than Grant Motherfucking Morrison? Kendra whips out a copy of Morrison’s map of the multiverse (I assume she also got her free poster by attending the Multiverse Panel at SDCC in 2014) and promptly deconstructs the very concept by flipping the page over. This may test the ductile strength of Snyder’s ideas – does the cool-factor of a Dark Multiverse outweigh the mundane goofiness of flipping over a poster to illustrate its existence? Or am I wrong to suggest that those are competing notions?

One thing’s for sure, Snyder and Capullo are playing with some of the biggest cards in DC’s deck. Mark, are you enjoying the hand they’ve dealt us? Also, are you happy to see this creative team back together again? I love Capullo’s drawings, but some of the action was a little visually noisy for my tastes – I couldn’t always tell what was going on, particularly in fight scenes. Also, how do you feel about Capullo kind of splitting the difference between classic Arthur and Jason Momoa for his Aquaman design?

Mark: I found the blending of classic Arthur and sexy new movie Arthur to be effective; the rest of the issue, not so much. Patrick, you really succinctly captured the appeal of Snyder and Capullo’s Batman collaboration by highlighting their ability to continually push themselves to explore new facets of the Bat-Universe. Dark Nights: Metal 1, on the other hand, turns its gaze inward with diminished results.

While I agree the Voltron-capped cold open is the issue’s most effective stretch, I also think it’s indicative of the issue’s most disappointing attribute: a lack of imagination. The idea of the Justice League joining together to form a superhero Megazord is arguably fun, but it’s not inventive—it’s shorthand for invention. I admit to a general pop culture remix malaise that extends far beyond this single comic book issue, but we live in a time where the most prized possessions of nerd culture—things like comic books and Star Wars and mecha cartoons and high concept fantasy stories—are now the most lucrative properties in the entertainment industry. And the massive conglomerates in control of these properties gorge themselves by reselling fans ever-increasingly bland remixes of what we once loved in a naked attempt to briefly trend on social media before sliding without notice into the cultural garbage bin.

It’s not that there’s no original ideas left in the world, it’s the that old ones have been stripped for parts so effectively that they can be swapped around and reconfigured into something resembling original thought at a much cheaper price with a much higher success rate. So, I’m sorry but there is nothing imaginative about superheroes climbing into mech suits for battle, it’s a pitch by a mid-level Mattel executive for a mediocre toy line. And later in the issue when Kendra flips the map of the Multiverse over to reveal the existence of a Dark Multiverse, all I could think was, “Yes, I saw Stranger Things too.” 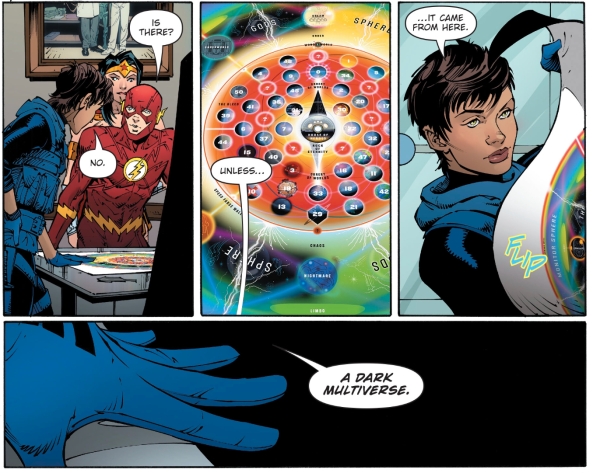 So perhaps the biggest sin of the issue, and, really, of the whole Metal event so far, is how exhaustingly boring it’s determined to be. Dark Nights 1, like the other Metal issues before it, is bogged down by page after page of exposition, endlessly repeating the same limited information DC has metered out before while readers wait like Vladimir or Estragon for a cathartic reveal that may never come. I expect great things from Snyder and Capullo—and if not great, at least interesting.

But for all my garment rending and gnashing of teeth, Dark Nights: Metal 1 is not a terrible comic book, it’s just terribly disappointing. I’m exhausted by DC’s ability to cravenly demand $4.99 for the same regurgitated pablum they’ve asked readers to pay for at least twice before. The first ten pages of Dark Nights are the only ones with a pulse; rip those out and sell them to me for the same price. At least then I’d get to strictly indulge in some pop art junk food, strategically engineered to stimulate my nerd pleasure sensors like comic book Chicken McNuggets. Plus, more importantly, it’d be over with quickly.