Mark: Dick Grayson is know for his perfection; the best ass in comics, the most suave personality, the most kickass combatant — generally the coolest guy in the universe. It’s an impressive feat, then, that writer Kyle Higgins and artist Trevor McCarthy (with colors by Dean White) are able to so thoroughly undermine Nightwing’s image of perfection in Nightwing: The New Order 1 without making us completely turn on the character.

This first issue cold opens 12 years in the past (or 2028, given that the issue is set in the year 2040), in the aftermath of Nightwing detonating some sort of weapon that seems to devastate Metropolis and the Justice League, and, as we learn, leads to the regulation of super powers. Cut to 2040 Gotham, and metahumans have been registered and forced to take medication that dulls their abilities. Commissioner Gordon and Bruce Wayne are dead. Much of Bruce’s money (through Dick’s inheritance or some other means) funded the campaign to codify metahuman control into law. Dick is now the chief of a law enforcement entity known as The Crusaders, tasked with policing this new order.

Almost everything we love about Nightwing is taken away in The New Order. It’s hard to root for Dick to succeed, but it’s not like he’s the villain either. Dick is the establishment now, he’s seemingly turned on his friends to spearhead a program determined to control them, he’s old and world-weary, his charms don’t sparkle like they used to. And while he’s not an asshole—he loves his son and is trying to what’s right—it’s clear he’s on the wrong side of history (when has wanting to register and suppress metahumans ever worked out well?). We don’t yet know exactly what set Dick on this course, but there’s something very X-Men about this whole set-up, especially when it’s revealed that Dick’s son Jake has metahuman abilities of his own. There’s a lot of familiarity in the story thus far, but it works this issue because the core is unique: Dick Grayson as we’ve never seen him before.

Of course, Nightwing as traitor is a bleak future, and McCarthy’s art and White’s colors work to convey that bleakness. Gotham City is never the most cheery place, but here its skies are a fiery red and choked with imposing clouds. Even the once unstoppable Dick Grayson is wearing down, his hair beginning to grey and wrinkles working their way into his face. There’s a heaviness to the entire proceedings that I usually consider antithetical to what a Nightwing story should be, but it works here.

Perhaps the issue’s only real weakness is its staunch reliance on ambiguity to fuel its mysteries. Everyone speaks of the past in vaugeries, with many mentions of her and him and what he’d done, that it leaves a lot of the series’ ultimate success riding on the reveals being sufficiently shocking/satisfying whenever they come along. It’s a strategy that could pay dividends in the end, but generally speaking, unless your story is built around a central mystery, it’s better to just get the information out there and deal with the ramifications rather than try to tease a future reveal as the reason for readers to keep coming back.

What’d you think, Ryan? Does this older Dick Grayson feel enough like the Nightwing we know and love to work for you, or is him turning against his friends a bridge too far? And any guesses on who Jake’s mother might be? Or what drove Nightwing to take such a dramatic stand against metahumans in the first place? And do you think the two mysteries might be related?

Ryan D: Mark, leave it to you to ask the big questions! I think the “she” of the mother and the inciting event which led to the Metropolis incident must be linked, if only for dramatic purposes. If they are not, there’s only one reason I can think of which could have sparked off such radical action in Dick Grayson: the death of Bruce Wayne. You mentioned it earlier, but I think that Bruce’s absence will go on to play a huge role in the upcoming reveals. While we know that, practically, his death gave Dick the inheritance money necessary to help push much of the legislature through which enabled the new legal status quo on metahumanity, but I think there’s more to glean here than just a pay-day.

It did strike me, for instance, that Grayson still sports his Nightwing costume in the Metropolis page after he sets off the device. 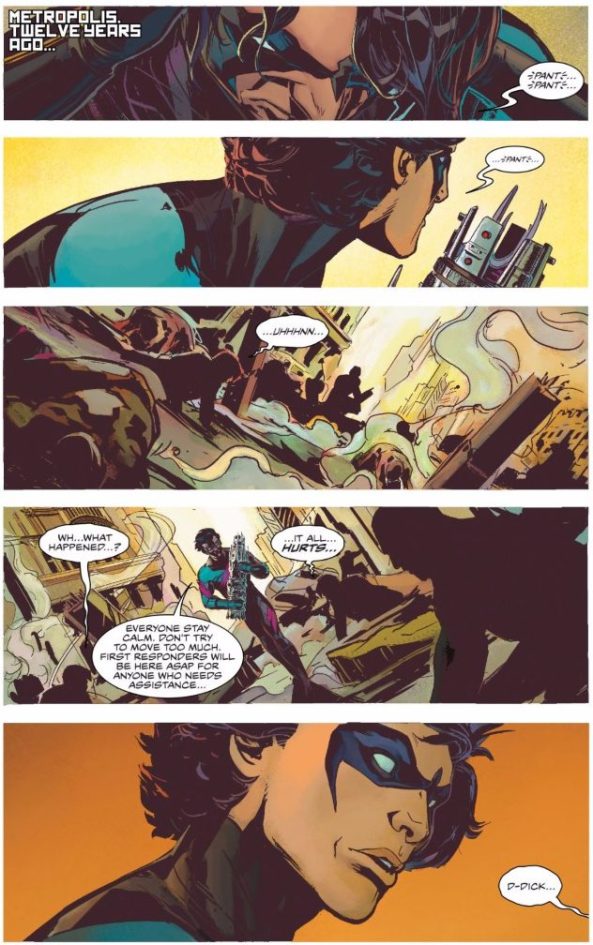 From Dick’s conversation with Alfred, we know that Bruce died before the incident. Considering that the past two times Bruce has died, Dick stepped in as a replacement Batman, even sharing the mantle when Bruce returned. This time, however, we see Dick cowl-less and, instead, sporting full Nightwing regalia. This might speak volumes about what sort of revelation Dick had when his mentor and father figure passed, and might also reflect the circumstances in which the Batman fell. Dick, addressing Alfred, alludes to all that Alfred’s lost and how bad it was before Bruce died. In this version of things, I can only assume that there’s something particularly related to metahumans in the death of Bruce Wayne that might send Grayson down the “no half-measures” path.

As far as the ominous “she” mentioned throughout the issue as Jake’s biological mother, my gut instinct says “Starfire.” Now, my knowledge of the history between those two characters is a bit muddy thanks to DC’s numerous reboots and retcons, but I’ve always enjoyed the romantic dalliances between two of the fittest heroes in the multiverse. I suppose the fact that she has alien DNA might make it a bit less of a surprise if Jake began to manifest powers, but the only other candidate I can think of is quite a long-shot: Kate Kane, Batwoman. Now, sure, I know Kate is gay, and — from what I’ve read of her solo title thus far — kind of turning evil, but the one thing which points me her way is that her father’s name is Jake (Jacob) Kane, the head of the paramilitary group “The Colonists.” This group thought that Batman was great but didn’t take his caped crusade far enough — something which shares some overlap with Dick’s current task of maintaining a police state. Maybe the mother could be an old flame from his days with Spyral, or a deep cut from a DC series I missed, or even a new character, but those two women were the only two I could consider with the information we have thus far.

I know you didn’t love the reliance upon vagueness which this title did sprinkle in liberally, Mark, but I find that I don’t mind it very much. I think, in a perfect world, every Bat-title should honor in some way the legacy of Batman being the World’s Greatest Detective, and Dick often strikes me as the noir side of this mystery/adventure franchise (I’m thinking of his time in Blüdhaven, for example). The best noir mysteries give the reader all of the pieces necessary to solve their core riddles right from the start, and I feel like that’s what Higgins is going for at the moment. Also, talking about people or events in such a vague way lends those things a certain air of importance or profundity — call it “the Voldemort Effect”. However, to your point, if Higgins saves too much information for reveals in future issues, there’s always the chance that future issues could get bogged down with dense exposition dumps, so we’ll need to see how the team plays it.

Overall, I like how this story is being handled. Mark says it makes him think of an X-Men tale, and I see that for Jake, but I think the real point of comparison here is Minority Report. Within the next issue or two, we’ll be seeing Dick bucking the very system he’s enforced for his entire adult career and turn against the co-workers and friends which might be the only close group of compatriots he has left after he betrayed the entire superhero community. Now that I think about it: why does Kyle Higgins hate Dick Grayson so much? Higgins takes away Dick’s youthfulness, joie de vivre, optimism, family, and quips. Now that Dick’s at a crossroads due to his son’s powers, Higgins and co. stand prepared to take away everything he’s worked for ever the past 12 years. After that, what’s left?