Mark: Dick Grayson is know for his perfection; the best ass in comics, the most suave personality, the most kickass combatant — generally the coolest guy in the universe. It’s an impressive feat, then, that writer Kyle Higgins and artist Trevor McCarthy (with colors by Dean White) are able to so thoroughly undermine Nightwing’s image of perfection in Nightwing: The New Order 1 without making us completely turn on the character. END_OF_DOCUMENT_TOKEN_TO_BE_REPLACED 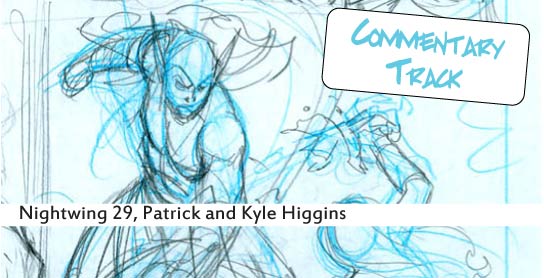 When I asked Kyle Higgins which of his issues he’d like to discuss, he instantly said “the last issue of Nightwing.” To which I, like an asshole, responded “you mean, your last issue of Nightwing?” It’s been an incredibly personal journey for Higgins, with its fair share of trails and tribulations, and his final issue effectively reflects on the entirety of his run. Patrick sat down with Kyle and went through the issue page by page, so get your copy handy and join us on the Commentary Track.

Retcon Punch: Let’s talk about the last issue! First of all, I love Russell Dautherman’s art in this thing. It’s warmer — the whole thing feels more naked to me.

Kyle Higgins: Yeah, it’s a more stripped down story. It’s a structure I haven’t done before — an intercutting structure. I had the idea pretty early on when I was writing the final issue to do flashbacks to all the villains that he’s fought. END_OF_DOCUMENT_TOKEN_TO_BE_REPLACED

Drew: When evaluating a work of art, I tend to ignore the artist — I’m far too focused on what the art means to me to care about what it means to anyone else, even if that anyone happens to be the one who made it. I think it helps me stay focused on the work in question — it’s all to easy to excuse bad art from an artist you like, or dismiss good art from an artist you hate — and focus on the meaning of a work of art. Occasionally, though, the artist (or the context into which the art was released) dominate the work’s meaning. Van Gogh paintings are presented as springboards for discussions of madness, and Beethoven symphonies simply cannot be performed without someone mentioning deafness. The real-world drama surrounding the release of Batwoman 24 are not nearly so biological, but in many ways, that only makes the issue a more frustrating read.

END_OF_DOCUMENT_TOKEN_TO_BE_REPLACED

Drew: At the end of Batwoman 22, Kate asks Bones for thirty hours to prepare for her planned takedown of Batman. We all suspected that that request might not be entirely on-the-level, assuming that Kate would use that time to set-up her own counter-plan. Issue 23 reveals that we were only half-right — Kate does use that time more for her own personal ends than for preparing for her mission, but how she uses it is entirely unexpected. END_OF_DOCUMENT_TOKEN_TO_BE_REPLACED

Patrick: We spent last month with The Killer Croc — an oddly blunt instrument for symphony as subtle and sophisticated as Batwoman. A few pages in to this issue, and we become aware that our heroes are searching for Bane to ask him for advice on how to capture Batman. I know Bane’s actually done this before, but it is interesting to see the brutish villains popping up in a more cerebral title. And the party doesn’t end there — the ranks of the good guys and the bad are fleshed out with soldiers and psychopaths. How exactly these opposing forced are going to accomplish their goals is another topic of conversation altogether. END_OF_DOCUMENT_TOKEN_TO_BE_REPLACED

Shelby: Trust is always an interesting concept to explore when masked superheroes are involved. The protagonist’s entire experience is based on a lack of trust: they don’t trust their loved ones to with their secret identity, they don’t trust the existing authority to take care of crime. That the distrust is well-founded doesn’t lessen the fact it’s the foundation of a successful masked superhero. But even the most independent superhero has got to have someone in the corner, some support system of people they trust and can rely on. Unfortunately, Kate seems to continuously find herself faced with people telling her, “you will trust me, whether you like it or not!”, essentially rendering the entire concept meaningless.

END_OF_DOCUMENT_TOKEN_TO_BE_REPLACED

Patrick: Early in this issue, DEO Agent Cameron Chase says to her sister: “I think I’m about to do something horrible.” This isn’t an admission of guilt, she isn’t asking for absolution, and she certainly doesn’t want to be talked out of doing this horrible something. But Chase isn’t the only person in this series that’s about to do something horrible. The whole cast of Batwoman imposes personal sacrifices on each other to the benefit of… well, of what exactly? Love? Honor? Duty? The very thing they’re sacrificing?

END_OF_DOCUMENT_TOKEN_TO_BE_REPLACED

Jack: It’s hard work to start a sequel off with a credible voice. The expression that most often comes to mind is “Space Mutants IV:  the Trilogy Continues.” This is essentially the beginning of Batwoman’s second major story arc, and I am proud to report that J.H. Williams has risen admirably to the occasion. The grim mystery of Gotham’s missing children solved, this series hits the ground running with a new set of problems for our heroes, or at least a set of unsettling complications of all of their old problems. END_OF_DOCUMENT_TOKEN_TO_BE_REPLACED

END_OF_DOCUMENT_TOKEN_TO_BE_REPLACED

Shelby: Speaking in the broadest of terms, there are a couple ways to define a person: in relation to the other people in their lives, or based solely on who they are as a person. So far in Batwoman, Maggie Sawyer has largely been defined as a character through her relationships, with Kate, with her daughter Jamie, even her relationship with her job and the missing children. This issue, we get a glimpse of just Maggie, and it looks like she’s starting to come apart at the seams. She’s got a job that’s pretty terrible even on the good days, a girlfriend who just isn’t around often enough, and a stubbornly independent streak which prevents her from asking for help. The batshit crazy she’s had to deal with these last 15 issues is catching up to her in a bad way; I have faith in her, but I worry she won’t make it through to the end.