Episodic storytelling is the name of the game in monthly comics. Month- or even multi-year-long arcs are fine, but a series lives and dies by its individual chapters. From self-contained one-offs to issues that recontextualize their respective series, this year had a ton of great issues. Whittling down those issues to a list was no easy task (and we look forward to hearing how your lists differ in the comments), but we would gladly recommend any (and all) of these issues without hesitation. These are our top 10 issues of 2017. 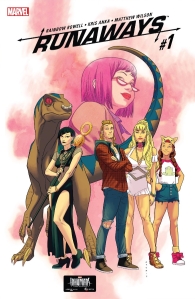 It’s almost unheard of to find a first issue that feels this urgent. There’s immediate, life-and-death stakes to Nico and Chase’s mission to save Gert that propels this tense, taut issue, but this mission also provides a framework that allows writer Rainbow Rowell to reintroduce her cast and explore how they’ve changed since their last series ended without ever feeling overly expository. Rowell shows true ingenuity in her use of Nico’s abilities (and, again, uses them to explore Nico’s headspace as well), and artist Kris Anka packs each page full with dense layouts without ever sparing fine details (nor his keen eye for style and expressions). This would be a stand-out issue no matter where it fell in Runaways’ timeline, but as an introduction to their relaunch, it’s even more remarkable. What a way to kick off a series.

Karnak sees the flaw in all things. It’s his signature power and the logline of this series, but with issue 6, Warren Ellis and Roland Boschi laid bare their secret thesis: what is Karnak’s flaw? Delving into Karnak’s past and revealing his own cognitive biases, Ellis and Boschi strip down his piety into something utterly human. It’s the kind of in-front-of-you-the-whole-time twist that you might of expect of Ellis, but its philosophical depth is particularly breathtaking. And Boschi’s atmospheric inkwork carries all of that depth so effortlessly, we couldn’t help but question the exact provenance of Karnak’s epiphany: did he actually confront his greatest weakness, or is his greatest weakness thinking that he did? It’s a confident mic drop from a team that knew to save the biggest questions for the end of their crime procedural.

From teen drama to goofball comedy to sobering political commentary, Ms. Marvel’s greatest strength might just be its comfort with a whole spectrum of tones. It’s part of the charm of the series (and one of its best reflections of teen life) that we never know if Kamala will be hanging out with her friends or dealing with the end of the world (literal or otherwise). With issue 19, G. Willow Wilson and Marco Failla find a new gear for that strength, drawing our attention to that changing tone. What starts out as a cute slice of life as Kamala eye-rolls through her family’s holiday traditions is brought to an abrupt end as a self-fashioned neighborhood watch hauls her brother off to some unknown location. It’s a shocking, unexpected intrusion that Wilson lays out frankly; nobody comments on the racial dynamics at play here, but they’re obvious for all to see. There’s no real peace for Kamala and her family so long as their neighbors feel empowered to act on their own worst fears. It’s a soberingly timely message delivered with confidence and authority — Marvel at its prosocial best.

7. Batman: Creature of the Night 1

Superhero fandom is a broad umbrella that encompasses everything from kids dressing up like their favorite heroes to the highfalutin analyses we like to do here, but Kurt Busiek and John Paul Leon manage to pay tribute to them all in Batman: Creature of the Night 1. Following the travails of a young Batman fan as he lives through the worst parts of Batman’s origin story — watching his parents die in front of him — the issue forces us to confront the trauma at the core of the Batman mythos while also celebrating it as a touchstone in our society. At once lionizing and self-critical, Busiek and Leon craft a remarkably expansive and nuanced portrait of fandom — at least through the experience of one young fan. It’s a dense, difficult issue that manages to both embody and explain what it is we love about the genre.

There’s a cruel juxtaposition at the heart of The Wicked + The Divine 32. At its core this is an issue about futility; while writer Kieron Gillen teases at happiness in moments like Persephone and Sakhmet’s surprisingly tender heart-to-heart, her attempts to save Sakhmet, as well as Dionysus’ heroic crusade, were always doomed to fail. This is a stark contrast to Jamie McKelvie’s always-gorgeous characters and dynamic action and Matthew Wilson’s otherworldly, psychedelic colors, both of which are in full force in this issue; the difference between the illusion of fame and the reality have never been clearer than they are here. Throw in a cliffhanger so cruel it could have only come from Gillen’s brain and you’ve got one rollercoaster of an issue, a perfect climax to yet another compelling, unpredictable year of WicDiv.

Between dozens of iterations across a handful of media and a famously cumbersome hash of titular nouns and adjectives, it’s fair to say that the identity of the Teenage Mutant Ninja Turtles is complicated. Those complications are part of what has made IDW’s take on the franchise so thrilling, but never have they been so explicit as in Teenage Mutant Ninja Turtles 66. The main identity crisis in this issue isn’t one of our Turtles, but Alopex the Snowfox, though the questions that she grapples with are virtually universal — especially for teens. For all their universality, these issues are rarely handled as elegantly as they are here, reminding us that this series is just as well-suited to character-driven drama as it is for crackerjack ninja action. It’s a gorgeously ruminative issue that makes hay out of the complicated identities of its characters.

Few comics manage to make a point as eloquently, entertainingly, and awe-inspiringly as Godshaper 6. The finale to Simon Spurrier and Jonas Goonface’s mini-series explores the connections between materialism, racism, and religion in a way that feels effortless, and ties all its lessons and revelations into the personal growth of its reluctant hero, Ennay. The lessons Ennay learns about what really matters in life are ones that can apply to us all, but they’re delivered in a way that’s uniquely Ennay: through the power of rock and roll. Any story that preaches the power of love, of creativity and art and stories, the power of one person to change the world is a story worth telling, but it’s Godshaper’s ability to preach those virtues in a world that feels so real and fleshed out, cruel and tragic yet at the same time breathtakingly beautiful, that truly made this series special.

Superhero groups shunned by society is a common enough phenomenon in comics, but where the X-Men have the Xavier School (or the Hellfire Club, if you’re nasty), and the Inhumans have Attilan, the rejected psiots of Secret Weapons are left to fend for themselves. With issue 1, Eric Heisserer, Raúl Allén, and Patricia Martín make that explicitly clear, introducing our two heroes by emphasizing just how down and out they are. Nikki is living as a kind of homeless bird-lady, and Owen is fired from his job when his powers go off unexpectedly, but there’s no well-funded superhero team or city-state to swoop in to support them. Indeed, as we soon learn, the system designed to support people like them has left them in this state, losing interest when their powers didn’t prove immediately useful. It’s a clever take on a familiar trope, supported by some crystal clear storytelling from Allén and Martín, who distinguish Nikki’s balletic grace from Owen’s lanky clumsiness, giving us a sense of how these characters move beyond their simple posture and design. It’s a propulsive first issue that leaves you hungry for more.

Tom King’s Batman is at its best when it takes the time to dig into Bruce Wayne as a person, and Bruce’s engagement to Selina Kyle gave King plenty of opportunity to do just that in 2017. Bruce and Selina’s double-date with Clark Kent and Lois Lane in Batman 37 provides the perfect canvas for King and Clay Mann to further explore their humanity, by taking their emotions seriously but also by not taking their personas so seriously; King seems to absolutely relish poking fun at Batman, and there’s nothing that brings the Dark Knight down to Earth more than that. It’s actually amazing how much fun this issue is. King and Mann have tapped straight into the pure joy at the heart of superhero comics, be it the joy of throwing Batman and Superman together or simply the joy of watching Batman yet again do the impossible — even if the “impossible” is something as mundane as falling in love.

On page one of this issue, Tom King and Mitch Gerads use that famous Jack Kirby quote to remind us that comics will break our hearts. It’s a recontextualization of that quote, to be sure, but “recontextualization of a Kirby creation” is kind of the point of this series. We can go on at length about the metatext of that quote (heaven knows we did in our coverage of the issue), but there’s so much else going on in this issue which grapples with mortality and love and depression. It’s a heartbreaking issue, as promised (albeit with a rousing twist at the end), but beautifully so. We can only hope for last hours with our partners as joyous and quiet and sexy and sad as the ones Scott and Barda share in this issue. Each and every spread, from enjoying their “song” as they crawl through L.A. traffic to Scott’s wistful philosophizing on the beach is pitch-perfect. It’s our favorite issue of the year.

The conversation doesn’t stop there, because your list is almost certainly different from ours. What were your favorite issues of 2017? For more Best of 2017 coverage, check out our Best Covers list!