There was no word for justice on my planet. The closest was the symbol on this table. It meant going beyond what was supposed to be possible, the natural laws. Imposing on the universe a higher standard. An ideal.

Our conceptions of justice hinge on fairness and impartiality — the notion that we are all held to the same standards of behavior (and face the same punishment for flaunting those standards). We understand how that can break down in practice (humans aren’t great at partiality), but we can imagine justice as a kind of platonic ideal we can strive towards. And that may be the best way to think about it, but closer inspection reminds us that, if it’s a platonic ideal, it’s one that varies from society to society and changes over time. We might reflect on the “justice” of the past (or of other cultures) and find it to be decidedly unjust, but that’s not how justice works — it’s not an objective monolith, but a deeply subjective, dynamic concept. That is, justice is a moral construct that only makes sense in light of the values of the society that construct it. Martian Manhunter’s approximation of justice reflects that idea, adding no moral spin to the “ideal” he mentions — in J’onn’s estimation, any ideologically motivated action “beyond what was supposed to be possible” is justice. In short, J’onn’s brief for the Justice League works just as well for the Legion of Doom.

The symbol that J’onn is referring to is all over the issue, serving as the de facto insignia for the League, but there are two less explicit appearances that illustrate the flexibility of his definition of justice. And actually, they maybe only make sense in light of one another. Let’s start at the end of the issue, where Lex Luthor has just beaten Vandal Savage to death. His weapon of choice? One of the invisible doorknobs into the Justice League’s private headquarters.

Or, is it an invisible doorknob into the Legion of Doom’s private headquarters? J’onn’s narration suggests that his justice sybmol means its opposite when inverted, as Luthor is holding it here. But orientation is a matter of perspective — particularly salient when placed on a round table, or on something that turns, like a doorknob.

Which brings me to that other appearance of the symbol, albeit this one is incomplete. Look at what Cyborg comes up with while trying to decipher the message from the mysterious projectile headed towards Earth: 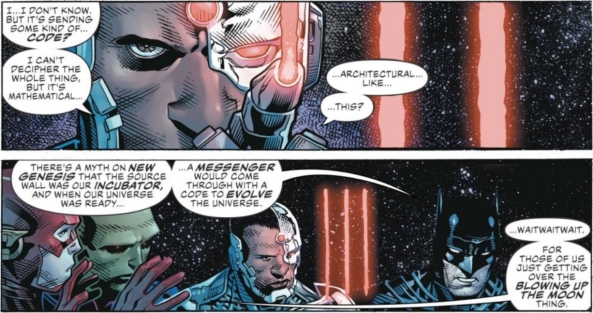 All he gets are the three vertical lines — not enough to orient the symbol in one direction or another. Is the object coming to advance the cause of justice or doom? And would either of those things even be recognizable when coming from some alien entity? Said entity thwarting our “natural laws” would technically fit J’onn’s definition of justice, but could be disastrous, nonetheless. Whether this thing bears the mark of justice or doom may be irrelevant — all we know for sure is that it’s going to change things.