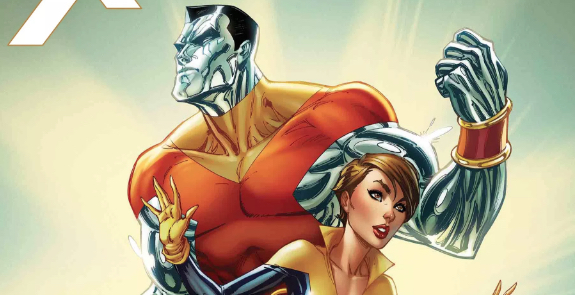 What’s a Wedding Special without a wedding? It’s X-Men: The Wedding Special 1, I suppose. I’ll try not to hold the fact that this isn’t actually Kitty and Colossus’ wedding against this issue — chalk it up to a failure of expectations and research on my behalf, although I’ll still argue that it’s a misleading title. If anything, the real problem with this special isn’t the lack of a wedding, but the fact that much of what we get instead feels insubstantial and, at times, even generic. END_OF_DOCUMENT_TOKEN_TO_BE_REPLACED

Heaven is a place where nothing ever happens.

– “Heaven” by The Talking Heads

Taylor: So sings David Byrne in describing his vision of paradise. Whatever your beliefs or disbeliefs of heaven may be, there’s no denying the power of the imagery the word or thought evokes. For some, it may be a rosy paradise full of angels strumming on harps. For others it may be a state of mind that represents tranquility. And for others still it may mean a bed full of Doritos being fed to you while Arnold Schwarzenegger movies play endlessly on repeat (or is that hell?). But what would heaven look like to a member of the X-Men? A danger room set to beyond-lethal difficulty? A utopia where humans and mutants get along? A place free of the burden of having augmented powers? In Amazing X-Men 1, we get our answer and fans are reintroduced to a member of the X-Men who they have surely been missing.

END_OF_DOCUMENT_TOKEN_TO_BE_REPLACED

Today, Taylor and Shelby are discussing Uncanny X-Men 13, originally released October 16th, 2013. This issue is part of the Battle of the Atom event. Click here for our complete coverage of Battle of the Atom.

Taylor: Mutants share a special connection with one another. Given that they’re discriminated against and face obstacles your average human would never face, it only seems natural that they would find solace in each other’s company. For that reason alone, many a mutant (in particular those who are X-Men) find the idea of mutant fighting mutant to be a violation of an unspoken mutant rule. However, just because mutants are united in their tribulations doesn’t mean they always agree on everything. The classic case of this is the struggle between Magneto and Professor X, who share different ideas of the role mutants should play in the future of humanity. But they aren’t the only two mutants to ever disagree on something and in Uncanny X-Men 13, part of the Battle of the Atom event, we see mutant battling mutant and the anger and sadness it causes.

END_OF_DOCUMENT_TOKEN_TO_BE_REPLACED

Taylor: You guys, we’re all getting older. Most of the time, it’s pretty easy for me to pretend that I’m not and that instead I’m ageless, but occasionally something happens that reminds me I will eventually bow to the forces of Father Time. Like many my age (29), my facebook feed is quickly becoming filled with pictures of weddings — followed a year later by pictures of babies. Just to be clear: this means that people my age are having children. They are completely responsible for the life of another human being. That seems terrifying to me, mostly because I can’t imagine taking on such a huge responsibility in my life. But then I realize that I’m almost 30, a perfectly normal age to have kids, and that despite my best efforts I haven’t escaped our temporal universe. Then I wonder if a time will ever come when I feel ready to have kids. I have to wonder because — to my eyes — having kids seems like a lot more trouble than it’s worth, even though everyone says having them is totally rewarding. Does it make sense that X-Men 6, part of the Battle of the Atom event, could change my opinion?

END_OF_DOCUMENT_TOKEN_TO_BE_REPLACED

Shelby: I hate a story that drags on too long. As a creator, it’s important to be able to edit yourself; you have to know where you want a story to go and be able to recognize when it gets there. At the same time, it’s just as frustrating as a reader when the story feels rushed. If I’ve settled in to savor a story as it unfolds, a sudden, “…andthenthegoodguyswinordidtheytheend,” is incredibly unsatisfying. A full-stop, wrap-it-up conclusion to a story arc just leaves me feeling confused, like maybe I missed an issue or something. As excited as I have been for Brian Wood’s X-Men, the end of the first arc has me feeling just that: confused and unsatisfied.
END_OF_DOCUMENT_TOKEN_TO_BE_REPLACED

Patrick: Until you see it in action, a movie-monster isn’t that scary. You can hear whisperings about the monster’s insatiable appetite, and come across the ruins of the encampment that it has savaged, but it doesn’t really mean anything until you see the Alien burst violently out of your buddy’s chest. Remember how Scream started? With the killer toying with and brutally murdering the biggest name on the marquee. Whatever else was going to happen from that point forward, the audience knows the killer means business. Last month, we got an abstraction of a conflict – a storied shitty history between cosmic siblings. Faster than we can really deal with it, the conflict is in our laps, and everyone gets a good look at what Arkea can do. Consider me convinced: she’s a problem – one X-Men might not be up to solving. END_OF_DOCUMENT_TOKEN_TO_BE_REPLACED

Drew: Anticipation is often the enemy of objectivity. Not that I can ever claim to be all that objective, but it can be difficult to evaluate a work on its own merits when expectations have been allowed to brew for as long as they have for X-Men 1. Since the announcement of this title, the all-female cast has been cited for everything from pandering to its female audience to serving as a rare bastion of female role models in comicdom. But, are any of those things what writer Brian Wood and penciller Olivier Coipel actually set out to do? Does that matter? Art shouldn’t have to answer for what people turn it into sight-unseen, but its difficult to talk about this series without some reaction to the expectations it was released into. Hopefully, I’ll be able to tie it back to the series itself. END_OF_DOCUMENT_TOKEN_TO_BE_REPLACED