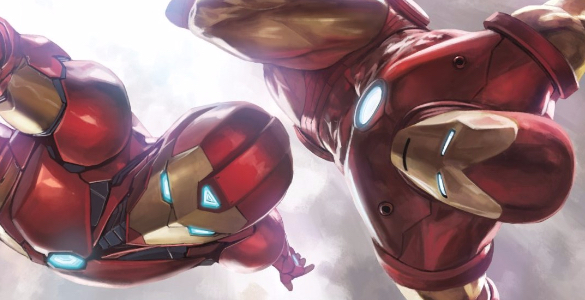 Taylor: The future is going to be weird, man. How do I know? Every day I stand before 25 middle schoolers and attempt to teach them important stuff about books. Frequently, I’ll make analogies that are too out of date for them to get or, more embarrassingly, I’ll pull a “back in my day” story out of the playbook. Thinking about the difference from when I was in middle school to the kids I teach today is a lesson in how fast things change. These kids (see, I’m already so old I can’t help it!) have never known a world without cell phones, the internet, and Justin Bieber. Generations: Iron Man and Ironheart 1 understands that change happens quickly, just as I do, but the world that the issue imagines is beyond anything I thought imaginable. END_OF_DOCUMENT_TOKEN_TO_BE_REPLACED

Ryan: I love when comic books try new things. Whether the point is to advance the relatively young medium or simply to offer some variety to a landscape that sometimes feels dominated by the same handful of big names and tried-and-true styles, it excites me to read a daring, non-linear narrative or to see adventurous use of graphic design in a title. I spent the entire summer haranguing a friend to read the copy of Jonathan Hickman’s The Nightly News which I graciously let him borrow. Hickman, responsible for both the writing and art, confessed in the afterword of the trade paperback that he intentionally made the comic difficult for the reader’s eye to follow by cluttering the pages with infographics and non-sequential art. Luckily, this calculated risk works perfectly in the total package. Bucky Barnes: The Winter Soldier showcases a fun, new direction for the former covert operative/Captain America and art that looks unlike anything I have read lately, but do these strong choices translate into a great read? END_OF_DOCUMENT_TOKEN_TO_BE_REPLACED

END_OF_DOCUMENT_TOKEN_TO_BE_REPLACED

Patrick: Naturally, I copied the our previous post about Swamp Thing to get this article started. I noticed that Capristo started the piece: “Poor Alec.”  And thus I lost my opening line for this write-up. Looking back on our Swamp Thing Alternating Currents, it is remarkable how much we pity Alec. No matter what he does, he can’t be granted a minute’s peace. And while his counterpart, Animal Man, seems to be amassing allies left and right in the Rotworld, Swamp Thing’s road is a perpetually lonely one. It makes Alec’s quest for his singular companion that much more compelling. They are two against the Rotworld, and the pair’s separation lends as much uneasy tension to this issue as the undead tentacle-monster. Oh, did I not mention: there’s an undead tentacle-monster.

END_OF_DOCUMENT_TOKEN_TO_BE_REPLACED

Alec Holland is just about the most reluctant hero of the New 52. Dude didn’t even cape-up until the end of issue 7. But it’s been a great ride, and now all human and plant life hangs in the balance. Catch up here and prepare for the Rot World crossover with Animal Man.

Patrick: There’s a pivotal moment near the climax of Swamp Thing and Arcane’s fight where Alec realizes what he’s up against. He stares, deadpan, at his injured enemy and puts the pieces together: “every wound… becomes a mouth.” The Rot is consumption: and nothing can quash its appetite. That’s us — you, me, the comics industry, the entertainment industry, consumers. We relentlessly chew up narratives, characters, histories… christ, DC Comics alone puts over 60 titles on the sacrificial alter on a monthly basis. They reboot the line, they run cross-over events, they revive Watchmen, they do line-wide zero issues. But it’s basically never enough, the consumers always want more. And so the war between the Green, the Red and the Rot goes on forever, a conflict insatiable. END_OF_DOCUMENT_TOKEN_TO_BE_REPLACED

Shelby: I love non-traditional stories. While there is definitely comfort to be found in stories that go exactly as you imagine, it’s those twists that can turn a story on its ass that make things really interesting. And when those twists give the finger to time-honored and traditional story-telling tropes, that’s when I sit up and take notice. Swamp Thing is an awesome embodiment of the non-traditional. Our hero is a monster (unless you compare him to the villain), and in this issue after he rescues the damsel, she turns right around and rescues him back.

END_OF_DOCUMENT_TOKEN_TO_BE_REPLACED

Drew: Swamp Thing is all about details. Plot-wise, this issue may be even lighter than the previous one — Swamp Thing brings the fight to Sethe’s doorstep, prompting Sethe to play his ace in the whole: a Rot-ified Abby Arcane — but the creative team continues to emphasize and elucidate themes in ways that are both exciting and rewarding. Both the narration and the art are packed with subtle detail that amplify, refract, and subvert the story in surprising ways. END_OF_DOCUMENT_TOKEN_TO_BE_REPLACED

Patrick: Alec Holland dies after taking a chainsaw through the torso.  Spoiler, I guess. No, I didn’t just ruin a twist or anything – in fact, Alec suffers this wound at the end of the previous issue. As is so frequently the case for characters in superhero comics, the drama continues to play out past the point of death, into the cerebral nether-space between living and dying. It allows Alec to decide that he needs to embrace his destiny and become the Swamp Thing. It’s a regular stop for heroes nearing the end of the Heroes’ Journey (capital H, capital J), but Scott Snyder manages something subtly different, emotionally unique to this very specifically reluctant hero.  END_OF_DOCUMENT_TOKEN_TO_BE_REPLACED

Drew: Patrick and I try to avoid talking about comics outside of these write-ups in order to keep the conversation on the blog and open to everyone, but when he was catching up on Swamp Thing for our initial, epic write-up on it, he sent me a message betraying how good he thought Scott Snyder’s writing was. This break of form is entirely justifiable, given that Snyder’s awesomeness on Batman and Swamp Thing aren’t so much opinions as hard fact, but it also reveals just how flashy Snyder’s writing is. It isn’t just good: it’s remarkably  good. END_OF_DOCUMENT_TOKEN_TO_BE_REPLACED