The Wicked + The Divine 33 is an absolute gamechanger of an issue (I know we put a spoiler warning before every article, but I just want to reiterate — you do not want this issue spoiled), one that made me rethink everything I thought I knew about the series, and which has me eager to go back and reread it from the beginning. Writer Kieron Gillen addresses this in his letter that closes the issue, stating that he and artist Jamie McKelvie have been unable to even disclose one of the three major themes of the series before because it would have spoiled issue 33’s big reveals. With so much out in the open now, though, I think I have a solid idea what that theme might be.

The first big twist? Woden isn’t actually Jon Blake — in fact, he isn’t even a god at all. Jon’s father, David Blake, has been masquerading as Woden all this time, having struck a deal with Ananke to use his son’s power (as the god Mimir) to give them both what they want. David’s appearances throughout both parts of “Imperial Phase” have emphasized his role as a Pantheon “expert,” but given these new revelations, I think it’s important to think back to David’s first appearance, which found him claiming that the younger generation (Laura and Jon’s generation) were too lazy and entitled to deserve a Pantheon. David’s resentment for young people has likewise lead him to imprison and enslave his own son, who he accuses of “stealing his life.” David hasn’t been acting — he’s just as selfish and scummy as Woden has always been — but we can see more than ever how those qualities are based in his baseless resentment of those younger than him.

Ananke too always seemed to resent her young charges, as we can see even in the flashback to her meeting with Jon.

Jon makes a great stand-in for millennials in general here. He’s thinking outside the box and refusing to be who Ananke wants him to be, refusing to accept that the options she gives are the only options available to him. I see this quite often — older generations resent millennials for not letting themselves be used like tools, and Ananke’s no different.

Thus, I think the third great theme of The Wicked + The Divine (after art and mortality) may just be the generation gap, that age-old conflict between the old and the young, between parents and their children. It seems notable, then, that Persephone rises above the animosity that seems to have defined so much of the Pantheon’s relationships with their parents. 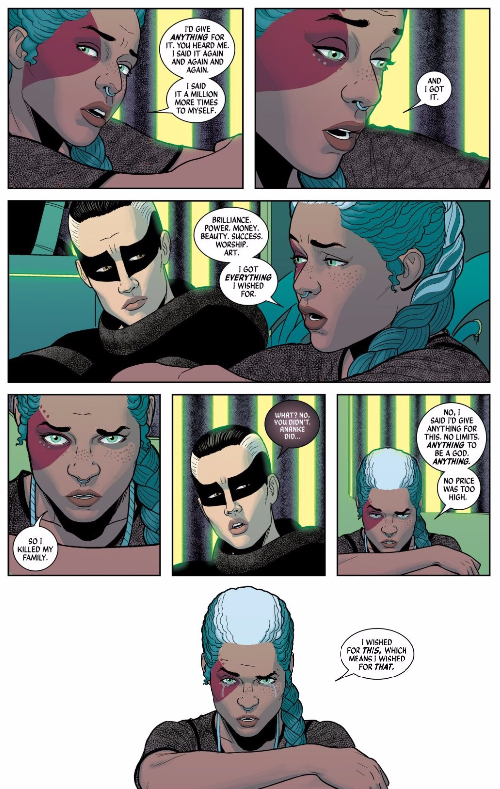 Not only did Persephone love her parents, but her role (unwitting or not) in their deaths has been the root of her deep self-loathing ever since. Persephone’s not “the Destroyer” because she killed her parents, like she thinks, but maybe she’s the Destroyer because she alone has the ability to see past the resentment that’s festered within the Pantheon and find a way to unite all generations against the Great Darkness?