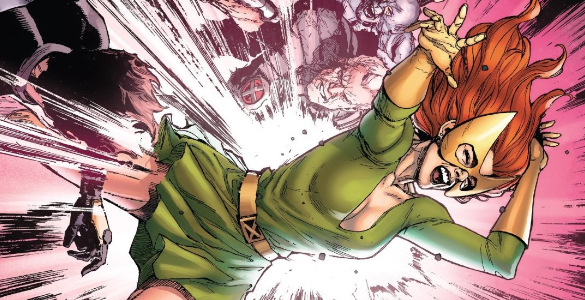 Does anyone remember the “flash sideways” device from LOST‘s final season? The show mined a lot of fun out of the mystery of just what the heck that other world was — a parallel universe? a new timeline? purgatory? — but I never really found the guessing all that fun, as the magical/metaphysical nature of that particular mystery meant that any and all of those things could be equally right. I tend to feel that way about most mysteries that delight in building up red herrings to look as likely as the ultimate answer (perfectly demonstrated in Clue‘s multiple endings; the culprit can only be found by the movie telling us whodunnit, not through any deductive work on our own), but it’s particularly pronounced in stories with a fantasy or sci-fi element that might defy our own experience of the world. That is, if we’re operating in a world with a magical island, is it possible to rule out even the most absurd theory? These are the thoughts running through my head as I read Phoenix Resurrection 2.

I should clarify — not enjoying guessing the ending isn’t the same as not enjoying the story. I love the holy heck out of Clue, which has far too much fun to ever really dwell on the “mystery” of who killed Mr. Boddy. We didn’t need a meaty mystery with lots of clues so long as we were having a good time.

Unfortunately, this issue seems a bit too invested in its own mysteries — which tend to feel a bit repetitive — for me to ever really be lost in the fun. Yet I’m also keenly aware that the answer lies somewhere between Phoenix Force magic, X-Men Mutant Sci-Fi, some kind of bizarre afterlife-y mythology, or some other comic book-y nonsense; not exactly the kind of answers that reward careful deduction. Honestly, any and all of those answers are satisfying enough, and I’m sure I’ll accept them when they’re finally revealed. I just wish we could skip to that part already.

Nothing in this issue is bad, per se, it just feels like such a rehash of the first issue, the “previously on…” introductory copy also serves as a decent summary of the issue itself:

Change those locations, and I wouldn’t even know the difference.

It’s classic middle chapter wheel-spinning, but it feels particularly aimless when the central mystery of what’s going on with the “young woman named Jean” can’t actually be advanced. Sure, we see that the Magneto that visits Jean somehow blips out of existence and into the X-Mansion, where he’s some kind of undead monster, before blipping back, but that’s hardly enough new development to hang a mystery on, let alone a whole issue. It’s an over-investment in a mystery that can’t ultimately matter, which leaves this issue feeling oddly hollow.

One comment on “Phoenix Resurrection: The Return of Jean Grey 2”