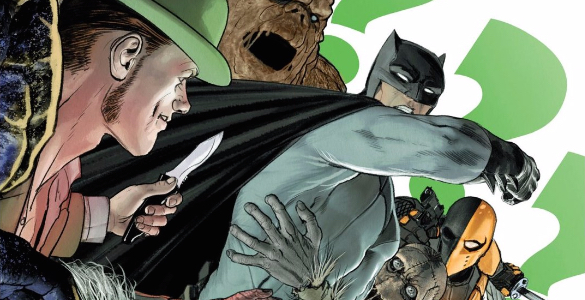 Michael: I’ll admit, I haven’t really understood Tom King’s fascination with Kite Man during his tenure on Batman. King placed Kite Man in the middle of “The War of Jokes and Riddles” in Batman 27 and his tragic origin — Riddler poisoning and killing his son — still left me unmoved. Batman 30 marks the second part of “The Ballad of Kite Man” as well as my cold heart thawing to Kite Man’s tragic existence. END_OF_DOCUMENT_TOKEN_TO_BE_REPLACED

Mikyzptlk: While Batman and Spider-Man’s rogues are most likely considered to be the deadliest of them all, I’ve long found The Rogues to be the most interesting of the various superhero rogues galleries. As far as I know, they are the only villainous group who follow a code of honor. They are all about the take, and they go out of their way to refrain from hurting anyone unless they absolutely have to. Their code of honor is why this very miniseries exists. In a world run by villains, The Rogues don’t really look so bad, and they are now suffering for that fact. The intent behind this series seems to be to explore what makes The Rogues so different from all of the other villains of the world. In issue 4, Brian Buccellato continues his examination of The Rogues in a serviceable, if not entirely mind-blowing fashion.  END_OF_DOCUMENT_TOKEN_TO_BE_REPLACED