More self-contained than an ongoing series (which may build on decades of backstory), but capable of more depth than a one-off, the mini-series may stand as the truest analog to novels that monthly comics can provide. 2015 was a banner year for mini-series, with both of the big two switching to minis almost entirely during their respective crossover events, and many more stellar minis coming from other publishers. These our our top 10 mini-series of 2015.
END_OF_DOCUMENT_TOKEN_TO_BE_REPLACED

Episodic storytelling is the name of the game in monthly comics. Month- or even multi-year-long arcs are fine, but a series lives and dies by its individual chapters. From self-contained one-offs to issues that recontextualize their respective series, this year had a ton of great issues. Whittling down those issues to a list was no easy task (and we look forward to hearing how your lists differ in the comments), but we would gladly recommend any (and all) of these issues without hesitation. These are our top 10 issues of 2015. END_OF_DOCUMENT_TOKEN_TO_BE_REPLACED

Drew: There’s a specific type of confusion that comes when reading certain Grant Morrison comics — the kind that comes when you have absolutely no idea what’s going on, but you have faith that it will all make sense in the end. Or, at least, you’ll be able to draw conclusions from it in the end. Mercury Man suggests that it all makes sense if we just slow down to make all of the connections, but Morrison books tend to require reading at a pace several orders of magnitude slower than the average comic. That Morrison doesn’t write “the average comic” is exactly why his works are so worth that effort, but I’ll be damned if it doesn’t make them incredibly difficult to talk about. END_OF_DOCUMENT_TOKEN_TO_BE_REPLACED

“We believe in Ultra Comics. And we demand a happy ending!”

Michael: “The Tinkerbell effect,” born from the stage play of Peter Pan, where Pan encourages the audience to clap their hands if they believe in fairies to save the dying Tinkerbell. That is, if you believe in something, it exists. Grant Morrison thrives on the philosophy of this idea and the power that we as an audience/society give to it. The Multiversity: Ultra Comics 1 takes this theme and runs with it, transforming the act of reading a comic book into an interactive, cross-reality adventure. END_OF_DOCUMENT_TOKEN_TO_BE_REPLACED

Mark: As far as I know, Grant Morrison has no plans to retire from comics anytime soon, but it’s hard for me to not view The Multiversity as the culmination of Morrison’s work at DC. Maybe comic books in general. It’s an opportunity to play in all of the sandboxes he’s ever wanted to play in. If The Multiversity: Pax Americana 1 was Morrison doing Watchmen, The Multiversity: Mastermen 1 reads like Morrison’s take on Mark Millar’s famous Superman: Red Son. Where that book imagined a universe in which Kal-El’s escape ship crashes in the USSR instead of America’s heartland, Mastermen takes place on Earth-10 where events unfold much like on our Earth until an alien spacecraft lands in Nazi Germany in 1939. Inside that spacecraft is a small child who grows to become Overman, a Superman analog and the key to the Nazi’s world domination. END_OF_DOCUMENT_TOKEN_TO_BE_REPLACED

Michael: Currently I’m re-watching Animaniacs, a children’s show which often wore the disguise of an educational tool pretending to be a cartoon. Sure, the characters are goofy and zany, but they still teach you the names of all of the countries of the world in a catchy tune. With that in mind, The Multiversity Guidebook is a story disguised as a “history book.” There’s a lot of information thrown at you about the multiple earths of the DC Universe, but it is clearly the connective tissue of every chapter of The Multiversity thus far. It’s the history of the same story: The DC Universe story. END_OF_DOCUMENT_TOKEN_TO_BE_REPLACED 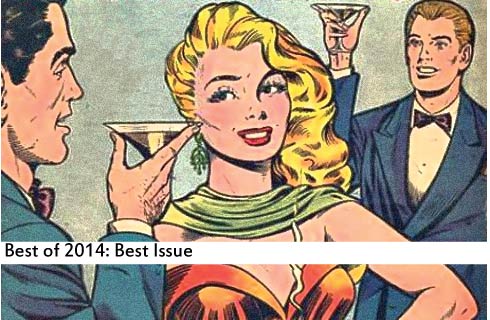 Episodic storytelling is the name of the game in monthly comics. Month- or even multi-year-long arcs are fine, but a series lives and dies by its individual chapters. From self-contained one-offs to issues that recontextualize their respective series, this year had a ton of great issues. Whittling down those issues to a list was no easy task (and we look forward to hearing how your lists differ in the comments), but we would gladly recommend any (and all) of these issues without hesitation. These are our top 14 issues of 2014.
END_OF_DOCUMENT_TOKEN_TO_BE_REPLACED

Mark: The Multiversity: Thunderworld Adventures 1 is a story out of time. On Earth-5, Billy Batson and friends exist in a pre-New 52 (and pre-Crisis on Infinite Earths?) continuity. Shazam is the name of a wizard, not the name of our superhero. The Rock of Eternity is attacked and the wizard Shazam taken prisoner by the evil Dr. Sivana. Working in tandem with the Sivanas across the multiverse, Dr. Sivana has mined enough Suspendium to build his own Rock of Eternity and create his own day on the cosmic calendar: Sivanaday, a day where everything goes his way. END_OF_DOCUMENT_TOKEN_TO_BE_REPLACED

Mark: Alan Moore’s Watchmen is regularly heralded as the finest work ever produced in the medium of comics, but it wasn’t born in a vacuum. Moore’s original pitch was to use heroes from DC Comics’ then recent acquisition of certain Charlton Comics characters like Peacemaker, Captain Atom, Blue Beetle, and The Question. In the end DC had other plans for their new IP, but Moore used those heroes as the frameworks for his invented characters. Now, almost 20 years later, the all-star team of Grant Morrison and Frank Quitely flip Moore’s original vision on its head in The Multiversity: Pax Americana 1. On Earth-4, Peacemaker is our The Comedian, The Question takes on characteristics of Rorschach, Captain Atom those of Doctor Manhattan, and Blue Beetle reflects Nite Owl. If Watchmen is a snake eating it’s own tail, Pax Americana is the tail biting back just a bit. END_OF_DOCUMENT_TOKEN_TO_BE_REPLACED

Spencer: So far Grant Morrison’s The Multiversity has been chock-full of ideas and meta-commentary, but while the first issue was essentially a celebration of everything comics offer as an art form, The Multiversity: The Just 1 explores much more critical, perhaps even cynical takes on the medium. Fortunately, it’s just as dense, thought provoking, and flat-out bonkers as the issues that came before. END_OF_DOCUMENT_TOKEN_TO_BE_REPLACED