by Ryan Desaulniers and Mark Mitchell 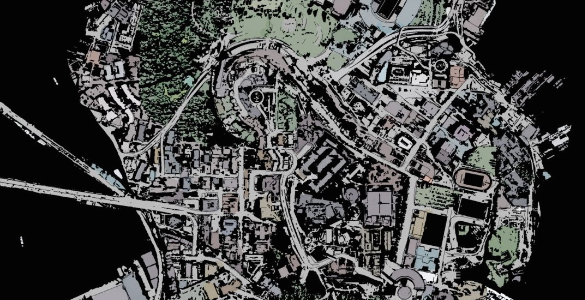 …nothing is so alien to the human mind as the idea of randomness.

Ryan D: Pattern recognition plays an integral role in the human cognitive process, with comic books being a particular medium which simply wouldn’t work without that ability to see and recognize patterns in visual symbols, icons, and shapes, as our brains wrestle a slew of static visual images into a narrative. The images are coherent because they are created together purposefully to be consumed in relation to each other. However, the human brain can still find patterns where there is no direct correlation. In 1958, the term “apophenia” came into being to describe that ability to take unrelated things and tie them together with connections which might not exist. We can observe this phenomenon every day in the form of confirmation bias, or, in more extreme cases, the claims of paranoid schizophrenics who may find the most benign details to be irrefutable proof of a grandiose conspiracy. So what happens if two seemingly unrelated people in different parts of the world — one embroiled in this hunt for clues in an outlandish pattern, the other just trying to adjust to a new life — both find the horrifying answer to what seems to be delusion? Herein lies the crux of Gideon Falls 1 by Jeff Lemire and Andrea Sorrentino, backed by a decorated team on colors and lettering of Dave Stewart and Steve “SWANDS” Wands. END_OF_DOCUMENT_TOKEN_TO_BE_REPLACED 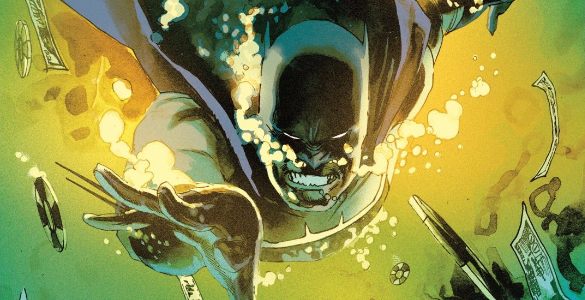 Comic books love revisiting and revitalizing the past — it’s Marvel and DC’s bread and butter. With “The First Ally,” Scott Snyder is revisiting one of Alfred Pennyworth’s many backstories: British Secret Agent Man. In All-Star Batman 12, Alfred is the one taking charge as he unfolds the mystery for The Dark Knight Detective. END_OF_DOCUMENT_TOKEN_TO_BE_REPLACED 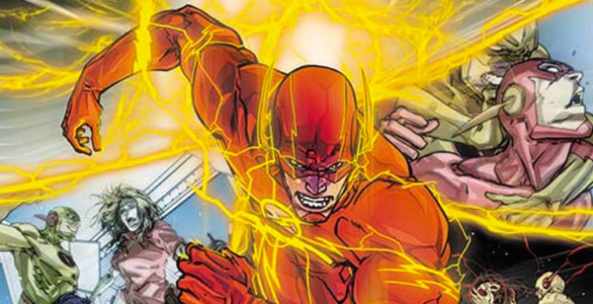 The danger in discussing a single issue of a serialized comic book is that a moment or character beat that doesn’t work in isolation might end up folding in nicely once more of the story is laid out to see. Since comic books are designed to tell their stories episodically, the fact that irrational behavior might be explained in the future doesn’t forgive the initial irritation, but it does help calm it. Such is the case in Joshua Williamson’s The Flash 25, where my profound annoyance in the previous two issues (especially The Flash 23) at Barry being so unaware of how selfish and dangerous he’s been by not telling Iris about his secret identity is resolved simply by having Barry acknowledge his foolishness. END_OF_DOCUMENT_TOKEN_TO_BE_REPLACED

Today, Spencer and Mark are discussing The Flash 23, originally released May 31st, 2017. As always, this article contains SPOILERS.

Spencer: I’ve never liked Barry Allen’s “new” origin story. It’s always struck me as an attempt to make the character — a likable, yet bland presence in his Silver Age heyday — more palatable to modern audiences by loading him with unnecessary angst, angst which tends to consume and overwhelm both Barry and his title. I’d be curious to see if current Flash writer Joshua Williamson agrees with me on that front or not. Flash 23 does indeed find Barry becoming consumed by angst, but not only do Williamson and Carmine Di Giandomenico present a rather compelling reason for it (in the form of Eobard Thawne), they also present it as being a rather glaring flaw on Barry’s part. END_OF_DOCUMENT_TOKEN_TO_BE_REPLACED

Mark: I have exactly zero interest DC’s upcoming animated adaptation of The Killing Joke. You will never be able to convince me that there is a version of Batman that needs to be R-rated. I don’t object inherently to the idea of a difficult Batman, I think there’s a place for one-off stories like The Killing Joke or Arkham Asylum, but to my mind these are mere diversions, thought exercises meant to explore the darker facets of the character. But while sometimes interesting, I don’t think they should even be lionized as important to the character. The best ones, including Frank Miller’s The Dark Knight Returns, are more a commentary on comics in general than they are everyone’s favorite Caped Crusader. You don’t really need any more evidence that holding The Dark Knight Returns and its ilk up as the “cool” version of Batman is a damaging exercise than Zack Snyder’s Batman v Superman: Dawn of Justice. Commentators and critics have already done a thorough job dissecting that movie’s many failings so I’ll refrain from doing so here, but I will add that even though Ben Affleck’s portrayal of Batman was praised by even some of its harshest critics, it’s not a portrayal of Batman I particularly enjoyed. Occasionally fun to look at? Sure. But like pretty much every other aspect of the movie, this is a Batman completely devoid of joy. END_OF_DOCUMENT_TOKEN_TO_BE_REPLACED

Spencer: Racism and discrimination are more complicated issues than I could ever properly tackle here, with or without a word-limit. What I do know is that, while good ol’ fashioned mustache-twirling racism is certainly still alive and well, a bigger problem may just be the stereotyping and “othering” of anyone perceived as different. It’s the persistent, false perception of black children as being “older” than their white contemporaries, for example, that leads to cases like Trayvon Martin, and that’s only one example amongst a nearly uncountable number. These kind of false perceptions can exist even in those who claim to be tolerant and open-minded. The ways that prejudice and oppression persist even in a supposed land of “equality” has always been a major element of Simon Spurrier and Jeff Stokely’s The Spire, but it takes center stage in issue 4. END_OF_DOCUMENT_TOKEN_TO_BE_REPLACED

“We believe in Ultra Comics. And we demand a happy ending!”

Michael: “The Tinkerbell effect,” born from the stage play of Peter Pan, where Pan encourages the audience to clap their hands if they believe in fairies to save the dying Tinkerbell. That is, if you believe in something, it exists. Grant Morrison thrives on the philosophy of this idea and the power that we as an audience/society give to it. The Multiversity: Ultra Comics 1 takes this theme and runs with it, transforming the act of reading a comic book into an interactive, cross-reality adventure. END_OF_DOCUMENT_TOKEN_TO_BE_REPLACED

Patrick: Joker is one of those characters that resists definition. In fact, we often use that lack of definition as a defining trait. I’m going to do a disservice to whoever made this observation — because I can’t remember where I first encountered it — but the most terrifying thing about Joker is that you never know whether he’s going to murder a child or throw a pie in Batman’s face. Arguably, the only thing that motivates the character is the desire to be a good Batman villain. Scott Snyder and Greg Capullo have played with this idea before — the Death of the Family even had Joker buying into the importance of their “relationship” — but this latest arc in Batman seems poised to establish Joker as something else entirely. He’s not a instrument of random, but intriguing, chaos, and he’s not in love with Batman. No: he’s Batman’s nemesis, and that means that he’s a sort of anti-detective, setting up mysteries that Batman cannot solve, corrupting superheroes and putting everyone’s lives in danger in the process. END_OF_DOCUMENT_TOKEN_TO_BE_REPLACED