On the surface, grief and regret may not seem all that similar; one deals with an inescapable force of nature, the other is preoccupied with (potentially avoidable) personal failures. I might argue that regret is a kind of grief, albeit over the death of an idea or an opportunity, as opposed to a loved one, but there’s a more fundamental commonality between these two: how personal they feel. This can make both grief and regret feel very lonely, potentially driving us away from the friends and family who might want to support us through those difficult times. It’s a trap Ivy falls into, trying to go it alone in the face of her own grief and regrets, but Batman and Catwoman (and the entire creative team behind Batman 43) have a better way. END_OF_DOCUMENT_TOKEN_TO_BE_REPLACED

About halfway through my first read of Batman 42, as Poison Ivy (through her minions) dangled Catwoman upside-down from a skyscraper, I suddenly remembered that the two characters are supposed to be friends. As if reading my mind, a few pages later Tom King and Mikel Janin addressed this head-on, with Selina appealing to their friendship and Ivy claiming that Selina doesn’t know the first thing about her. Apparently Ivy’s bid at world domination is meant to be benign, charitable even — a genuine attempt from her to fix the world, to redeem for past crimes. Apparently there was a rock of regret inside her that not even her closest friends and allies knew about — but Batman knows. His entire plan, and his eventual, inevitable victory, revolves around him having nailed down Ivy’s motives and methods. END_OF_DOCUMENT_TOKEN_TO_BE_REPLACED 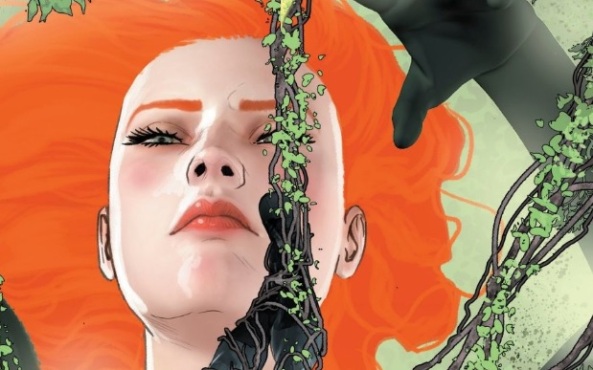 Michael: The traditional superhero narrative can boil down to “hero is on top, villain arrives and takes over, hero defeats villain and the status-quo is restored.” There will be a period — however long or brief — where the villain has won and all hope is lost. Instead of showing a gradual build to that moment of defeat, Batman 41 starts us off there. Instead of opening with the first act optimism of A New Hope, Batman 41 goes right for the bleak Empire Strikes Back act break. END_OF_DOCUMENT_TOKEN_TO_BE_REPLACED

END_OF_DOCUMENT_TOKEN_TO_BE_REPLACED

Drew: Joseph Stalin likely never uttered this phrase, but while its provenance may be dubious, it’s hard to argue with its sentiment. We’ve all experienced this personally; individual deaths carry with them the nuance and beauty of the decedent’s death in a way that dozens of deaths simply can’t. Each of those deaths are felt singularly by the loved ones they affect, to be sure, but the rest of us can’t really fit the sum of those tragedies into our brain. They become, for lack of a better term, a statistic. This is why war stories are so rare in superhero comics — the higher death count doesn’t necessarily equal higher emotional stakes, so killing swaths of civilians runs the risk of making any one of those deaths lose whatever oomph it might have on its own. Writer Tom King seems keenly aware of how easy it would be for the victims of “The War of Jokes and Riddles” to become statistics, taking pains to emphasize just how deeply Batman feels each of those deaths. END_OF_DOCUMENT_TOKEN_TO_BE_REPLACED

Shelby: A couple years ago I saw Melancholia in the theater, I believe with the esteemed Retcon Puncher Taylor. Spoiler alert: it’s probably the most depressing move I’ve ever seen. Beautiful, but calling it a downer would be an understatement. In it, Kirsten Dunst plays an extremely depressed woman; at one point, she is physically incapable of getting out of bed, relying completely on her sister’s aid. For me, it raised the question of how much leeway should we give people suffering from mental illnesses such as depression. While I was watching the movie, I was distracted by how seemingly mean the rest of the characters were to this severely ill woman, but you have to step back and think about the impact her illness has had on their lives. At what point do those closest to someone with this sort of disease finally snap from dealing with it, and can we really blame them for doing so? And finally, what happens when that mental illness manifests itself as super-powered criminal activity? (Okay, that last question is more about the Batgirl annual than Melancholia, but you get the idea.)

END_OF_DOCUMENT_TOKEN_TO_BE_REPLACED

Today, Spencer and Mikyzptlk are discussing Detective Comics 28, originally released February 5th, 2014. This issue is part of the Gothtopia event. We talked with John Layman about Gothtopia, you can find that interview here.

Spencer: Back in the summer of 2010 I was obsessed with Bryan Lee O’Malley’s Scott Pilgrim comics, and eagerly awaited the release of their movie adaptation. I spent the weeks leading up to it reading and rereading the comics and preparing myself for the awesomeness I knew the movie would surely be. After I actually saw the movie, though, I was oddly disappointed by the many changes made between it and the comics. It took me quite a while to reconcile the two versions, but once I did, I ended up seeing it twice more in theaters and it quickly became my favorite movie. I had a similar experience reading Detective Comics 28 this week. After last month’s introduction to the “Gothtopia” storyline I was expecting a lot out of this issue—specifically, more exploration of this new Gotham utopia—but the story ended up veering in another direction entirely. I was disappointed at first, but fortunately, the story I got instead ended up being pretty enjoyable in its own right. END_OF_DOCUMENT_TOKEN_TO_BE_REPLACED

“I think I may have found a project I’d actually enjoy doing: helping these cats and dogs. They should be rewarded for not being people. I hate people.”

Spencer: So far, both issues of Harley Quinn have featured its heroine rescuing animals from oppressive environments. Harley being an animal lover isn’t really a surprise—she’s basically a big kid, plus she’s canonically owned and raised laughing hyenas in the past—but it still seemed a bit odd to me at first that this book was hitting this point so hard. I suppose it ultimately makes sense, though; when writing a book featuring a villain protagonist you’ve got to make sure the antagonists are even more loathsome, and everybody hates animal abuse—even supervillains—right? END_OF_DOCUMENT_TOKEN_TO_BE_REPLACED

Drew: Peter Tomasi is an ideal utility player — he’s able to synthesize and adapt the ideas other writers introduce in flagship titles into something that can stand up on its own. He regularly turns what could be an unwieldy Frankenstein monster into something beautiful, so long as he’s given the space to do so. It turns out that last caveat is rather important — without appropriate time to develop the ideas, he’s forced to strip them down to the connective tissue they are, yielding stories that feel rushed and obligatory. Unfortunately, Detective Comics 23.3: Scarecrow falls firmly into this latter category, squandering some etherial, appropriately Scarecrow-y Szymon Kudranski art on a strange housekeeping issue. END_OF_DOCUMENT_TOKEN_TO_BE_REPLACED