My Green Lantern fandom often feels like a relic from a time before I truly understood what I loved about comics. I love the limits of the medium — the way an artist has to imply light and sound and movement and time all on a still page which literally possesses none of these qualities. So much of a comic story, for me, is in how it is told, rather than what it’s telling. But Green Lantern is a myth-making franchise, and the moment-to-moment storytelling can often be measured by the twists and connections it makes to its own winding history. Hal Jordan and the Green Lantern Corps 37 eschews that entirely, pulling one of Superman’s Big Bads into the ring for some refreshingly innovative visual storytelling. END_OF_DOCUMENT_TOKEN_TO_BE_REPLACED 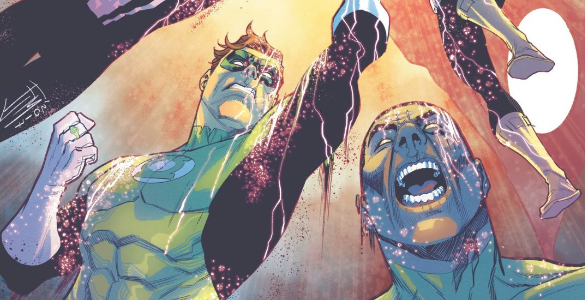 Hal Jordan and the Green Lantern Corps 36 sees the conclusion of the “Twilight of the Guardians” storyline, as our favorite Earth Lanterns rescue Ganthet and pals from the Controllers. Unlike previous issues, Robert Venditti frames this issue from Ganthet’s perspective. In the face of his own death via Controller transformation, Ganthet laments on the very long life he’s lived. Most of all he laments on the fact that he has never been a father. END_OF_DOCUMENT_TOKEN_TO_BE_REPLACED

Spencer: By some sort of weird cosmic coincidence, I’ve been re-reading Grant Morrison and Howard Porter’s late 90s JLA run this week. While that series is rightly remembered for its grand, heady ideas and breakneck-paced tales, what impressed me the most this time around was Morrison’s regard for the DC universe — every story was sprinkled with guest stars and allusions to past stories, well-known and deep cuts alike. Despite Rebirth’s best efforts, that sense of history is something I’ve been missing from DC the past few years, so I was pleasantly surprised when I opened Dark Days: The Forge — the prelude to Scott Snyder and James Tynion IV’s big summer event — and discovered that it’s practically an ode to DC’s past. Snyder and Tynion are clearly having a blast digging into DC’s sandbox, and it’s hard for that sense of enthusiasm and wonder not to rub off on the reader. END_OF_DOCUMENT_TOKEN_TO_BE_REPLACED

Today, Patrick and Shelby are discussing Green Lantern 20, originally released May 22nd, 2013. This issue is part of the Wrath of the First Lantern crossover event. Click here for our First Lantern coverage.

Patrick: Geoff Johns’ final issue of Green Lantern is framed with a narrative device I was first introduced to in the movie The Princess Bride: the old man reading the story to a young man. The flick is an adaptation of novel, and the novel proports to be a rediscovered classic, heavily annotated by the “editor,” William Goldman (who actually just wrote the whole thing). All three of these example serve to elevate the story itself – you don’t need to look to the real world to find a captive audience, there’s one right there in front of you. This issue takes the entirety of Johns’ run and gives it a reverent audience, promoting the nine years since Green Lantern: Rebirth to mythic stature. I’ve been following the entirety of that run, so I’m part of that audience, and I’m moved and affected in very real ways reading this issue. But the bright lights and decades-old mythology groan under the weight of so much self-congratulation. This is a victory lap – mileage will vary.

END_OF_DOCUMENT_TOKEN_TO_BE_REPLACED

Today, Spencer and Drew are discussing Green Lantern: New Guardians 20, originally released May 22nd, 2013. This issue is part of the Wrath of the First Lantern crossover event. Click here for our First Lantern coverage.

Spencer: My first experience with a major creative team shake-up was back in 2007 when Geoff Johns ended his run on Teen Titans. It was the first book I had ever followed monthly, and I walked around for weeks with an empty feeling in my stomach after I heard the news. Nowadays it feels like creative teams change almost daily, and I’ve developed a thick skin out of necessity, but every once in a while a change will hit me like it’s 2007 all over again. Tony Bedard’s departure from Green Lantern: New Guardians is one of those changes, and this final issue epilogue is such an effective goodbye that I feel completely justified about how much I hate to see it end.

END_OF_DOCUMENT_TOKEN_TO_BE_REPLACED

Jonathan Hickman has been ramping up to some world-altering shit. We’ll be digging into Infinity with zeal, but it means catching up with both Avengers and New Avengers. We started our coverage of the bi-weekly Avengers with issue 11, and if you want to join us there – here’s a video recap to get you all situated.

Today, Patrick and Drew are discussing Green Lantern 17, originally released February 20th, 2013. This issue is part of the Wrath of the First Lantern crossover event. Click here for our First Lantern coverage.

Patrick: The end of an era is nigh: Geoff Johns and crew are stepping down as shepherds of the Green Lanterns. Wrath of the First Lantern is the grand finale, but it’s already showing signs that it’s really more of a victory lap. With concepts as grandiose as the creation of the universe and altering the past in play, the entire Green Lantern Universe — past, present and future — is exposed and vulnerable. I haven’t been this excited about Green Lantern in years.

END_OF_DOCUMENT_TOKEN_TO_BE_REPLACED

You’re planning to read the Wrath of the First Lantern, right? It’s Geoff Johns and company’s last hurrah with those characters, so you BEST to pick it up. But if you want to understand every second of that even — and we know you do — you’ve got to get a grip on what came before. If you missed any part of the Rise of the Third Army (and we pay attention to our analytics – none of you are reading Red Lanterns), we’ve got like 20 issues worth of dense GL plotting to catch you up on.

Shelby: It’s finally time for Kyle Rainer to learn to master the power of love. He’s saved it for last because it is the most difficult, but why is that? Surely rage or greed or even fear would be much harder to command and control. While the more negative end of the emotional spectrum is difficult to control, it is easy to feel. I know I feel ready to puke red-hot plasma just about every morning on the commuter train to work. The difficulty of love lies in the challenge of letting yourself experience love. It’s an emotion that be very painful to the person feeling it; sometimes it’s just easier to block it out entirely. Kyle learns the hard way: you can’t master an emotion you are afraid to let yourself feel.